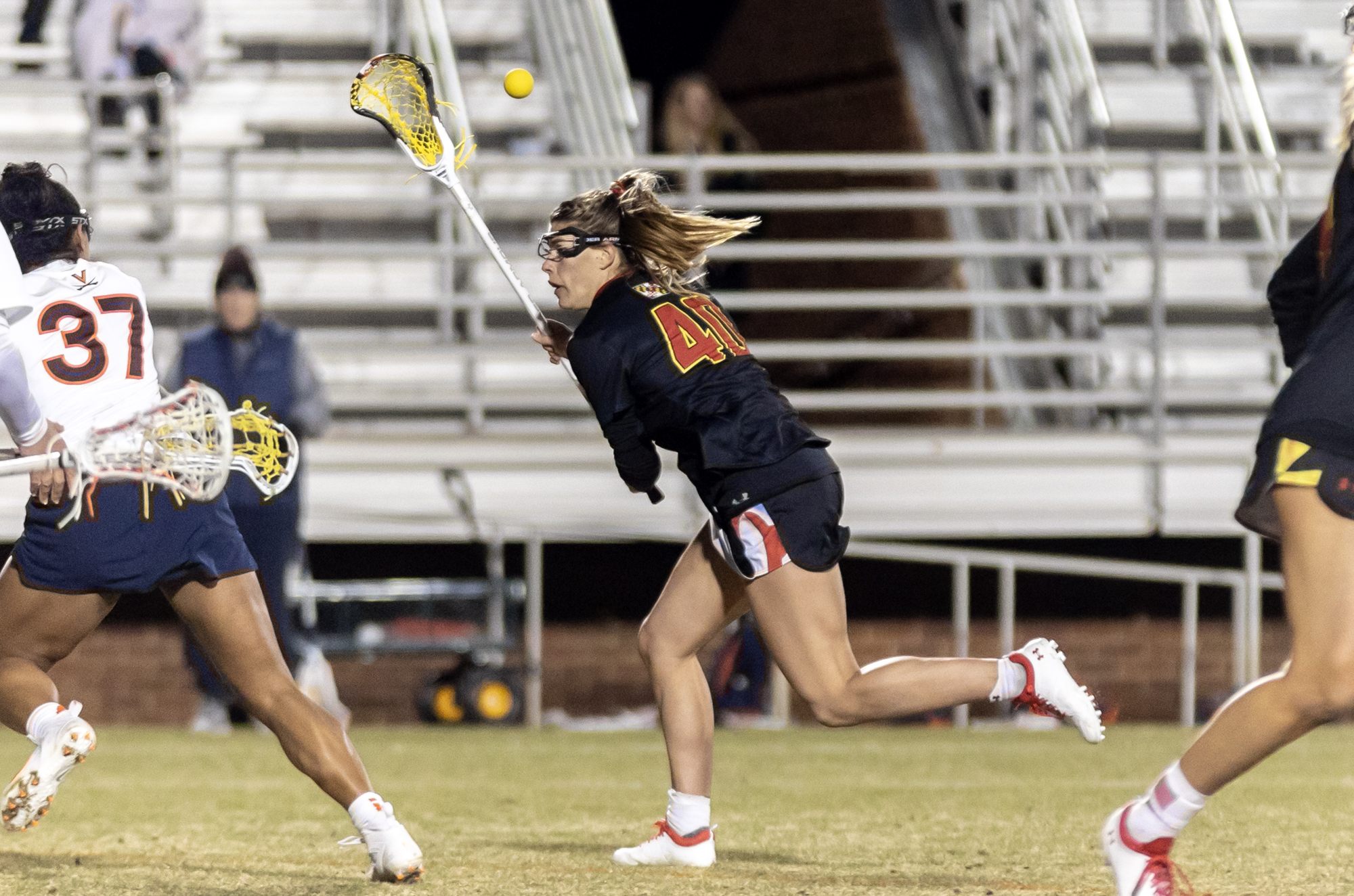 Maryland women’s lacrosse was a woman-up at the beginning of the third quarter when Shannon Smith lobbed the ball to attacker Hannah Leubecker.

After more than 18 minutes without a goal, Leubecker fired the ball between two Virginia defenders to end Maryland’s scoring drought.

It was a game of momentum swings when the No. 8 Terps battled the No. 10 Cavaliers on Friday in Charlottesville, Virginia. Both teams went entire quarters without scoring before Maryland pulled out ahead in the second half and won the game, 17-13.

The first quarter was full of goals. The Terps put the first two on the board in quick succession, but the Cavaliers responded with two of their own. The pattern of scoring pairs of goals continued throughout the first quarter, with the period ending with Maryland up 6-4.

The back-and-forth play wouldn’t appear in the game again. Instead, the rest of the game was ruled by scoring droughts and runs.

Virginia dominated the draw control, winning it 5-1 and scoring five goals in the second quarter. But Virginia’s defense was the real story of the frame. The Cavaliers shut out the Terps for the entire 15 minute quarter, despite the Terps having plenty of opportunities to score. Coach Cathy Reese’s squad picked up five ground balls and attempted six shots, but the Terps just couldn’t get past the Virginia defense and goalkeeper Ashley Vernon, who clocked three saves during the period.

“Virginia is a really disciplined team,” Reese said. “They’re smart, they’re deliberate and they take full advantage of the opportunities they get.”

Maryland’s aggressive tactics didn’t help, as it picked up six fouls and a yellow card during the period.

Their foul trouble led to Virginia scoring on all four of the free-position shots it was allotted in the second quarter.

The Cavaliers went on one last run in the last quarter of the game. They quickly scored two goals to start play and won the first three draw controls. Virginia later went two for two on free-position shots, which allowed it to decrease Maryland’s lead to one point.

On defense, the Cavaliers kept Maryland from finding the back of the net for a majority of the quarter.

Reese’s team hit reset to keep themselves in the game, she said. The Terps told themselves that the game wasn’t over and hit the ground running after Virginia’s scoring runs.

In return, the Terps scored eight goals in the third quarter with 57 percent of their shots on goal hitting the net. They overpowered the Cavaliers 7-2 in the draw control circle and caused four turnovers.

“I’m so proud of our attack and the way we rode,” Leubecker said. “It definitely helps with momentum when you can get those caused turnovers.”

Maryland ended the third quarter up 14-9, but it had one more scoring run left in it.

After Virginia closed the gap in the score to just one point, Maryland’s attack surged once again. Aurora Cordingley scored two more goals for the Terps, and Leubecker kept the Cavaliers’ defense running, before whipping the ball into the bottom of the net to score the final goal of the game.

“We learned that we can fight through a lot,” Reese said. “We can handle a lot.”