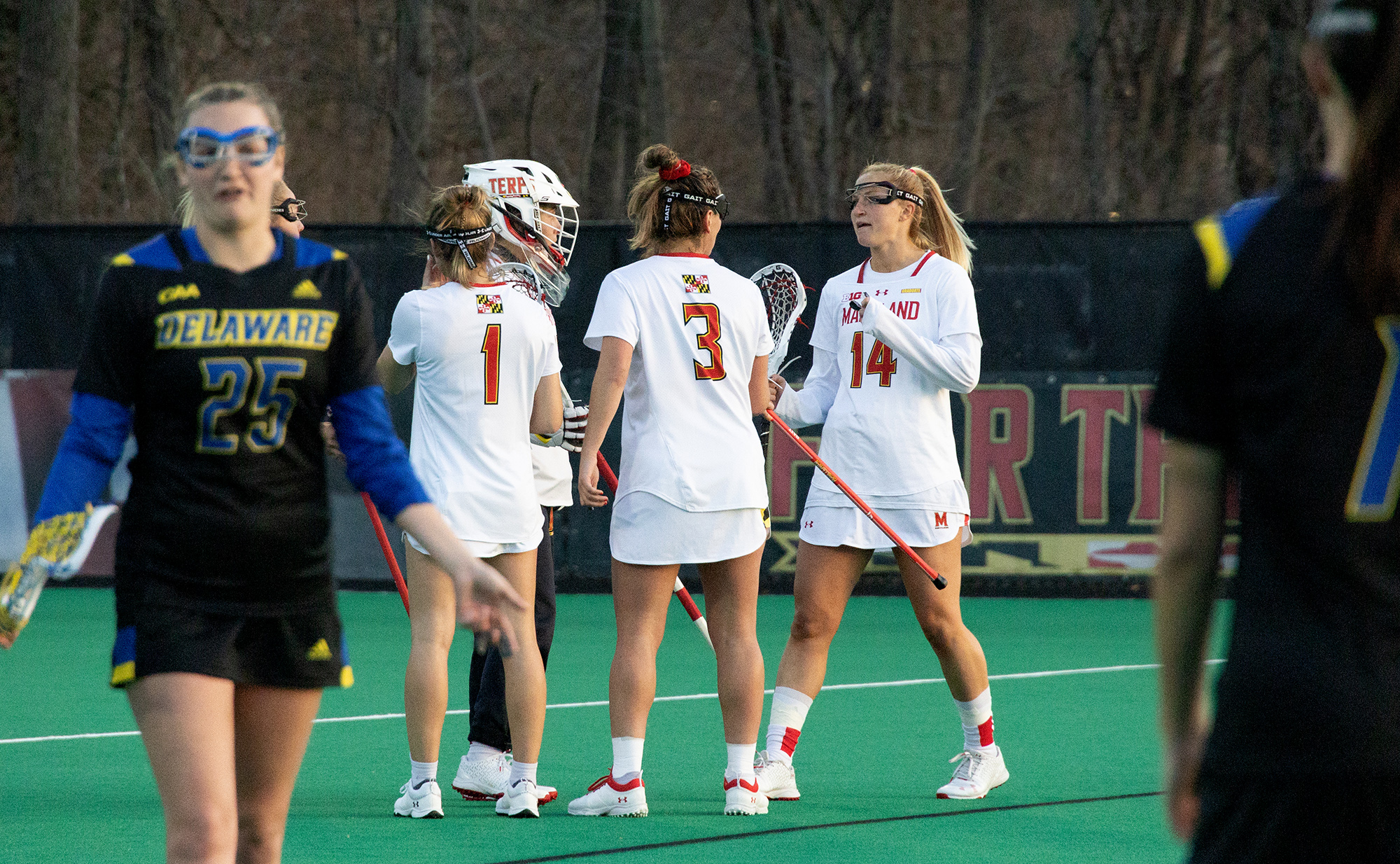 After a powerful performance in the first half, Maryland women’s lacrosse was on defense to start the second half in its game against Delaware on March 1.

Defender Abby Bosco put the pressure on the Blue Hens’ offense, forcing them to toss the ball out of bounds, swinging control back to her team in her second caused turnover of the game. The Penn transfer then rushed the ball down the field and passed to her teammate to give the team its first clear of the half.

“Abby … was always aware of where we are clearing,” coach Cathy Reese said. “She’s either the one carrying it or the support there.”

In their first midweek game of the season, the Terps obliterated Delaware 15-2 in a performance that showed off their dynamic defense. As Maryland heads back on the road to battle William and Mary, the team hopes to keep up the momentum.

The Terps play woman-to-woman defense, forcing their opponents to make shots their goalkeepers can easily save, Reese said. Maryland’s defense strives to keep improving on double-teaming the opposing attackers, ensuring every Terp defender has backup.

“We talked a lot about … making sure that if anyone’s going to get a shot off, it’s not against one of us, it’s against the whole team,” Reese said.

In its game against Delaware, Maryland limited its foes to 11 shots on goal. It also reduced the Blue Hens’ offensive opportunities — the team was only 11-19 on clears.

Reducing opponent clears has been a “big focus” for Reese’s team. As the season continues, she wants to keep emphasizing holding the ball in the midfield and allowing the team to play less in the defensive end, she said.

“I want to be smothering in that area,” Reese said.

The Terps also used turnovers to control the game, causing 13 of the Blue Hens’ 20 turnovers, their highest count of the season. On top of turnovers, the team picked up 28 groundballs.

“We were able to get the help there, which is something we’ve been working on,” she said. “Just having everyone play together is really what’s making it all work.”

Bosco herself picked up four groundballs and caused two turnovers for her new team.

Maryland’s goalkeepers also played strong, only allowing two goals during the game after completely shutting out Delaware for the entire first half.

Goalkeeper Emily Sterling was in the cage for the whole first half for the Terps. The junior had five saves, bringing her to a total of 17 saves this season.

“Our goalies played amazing [on Tuesday], so that obviously helps so much,” Bosco said.

Emily Lamparter was in the net in the third quarter, and Maddie McSally finished up in goal in the fourth quarter. The two Terps each had two saves and one goal allowed, aiding the team in maintaining their commanding lead.

Maryland will play William and Mary in Williamsburg, Virginia, on March 5.

The Terps have scored 70 goals in their first four games with 28 assists, but they’ve caused 36 turnovers and limited their opponents to 62.7 percent on clears.

As they continue playing, Reese’s team will continue to play the disciplined and consistent defense they’re trying to focus on.