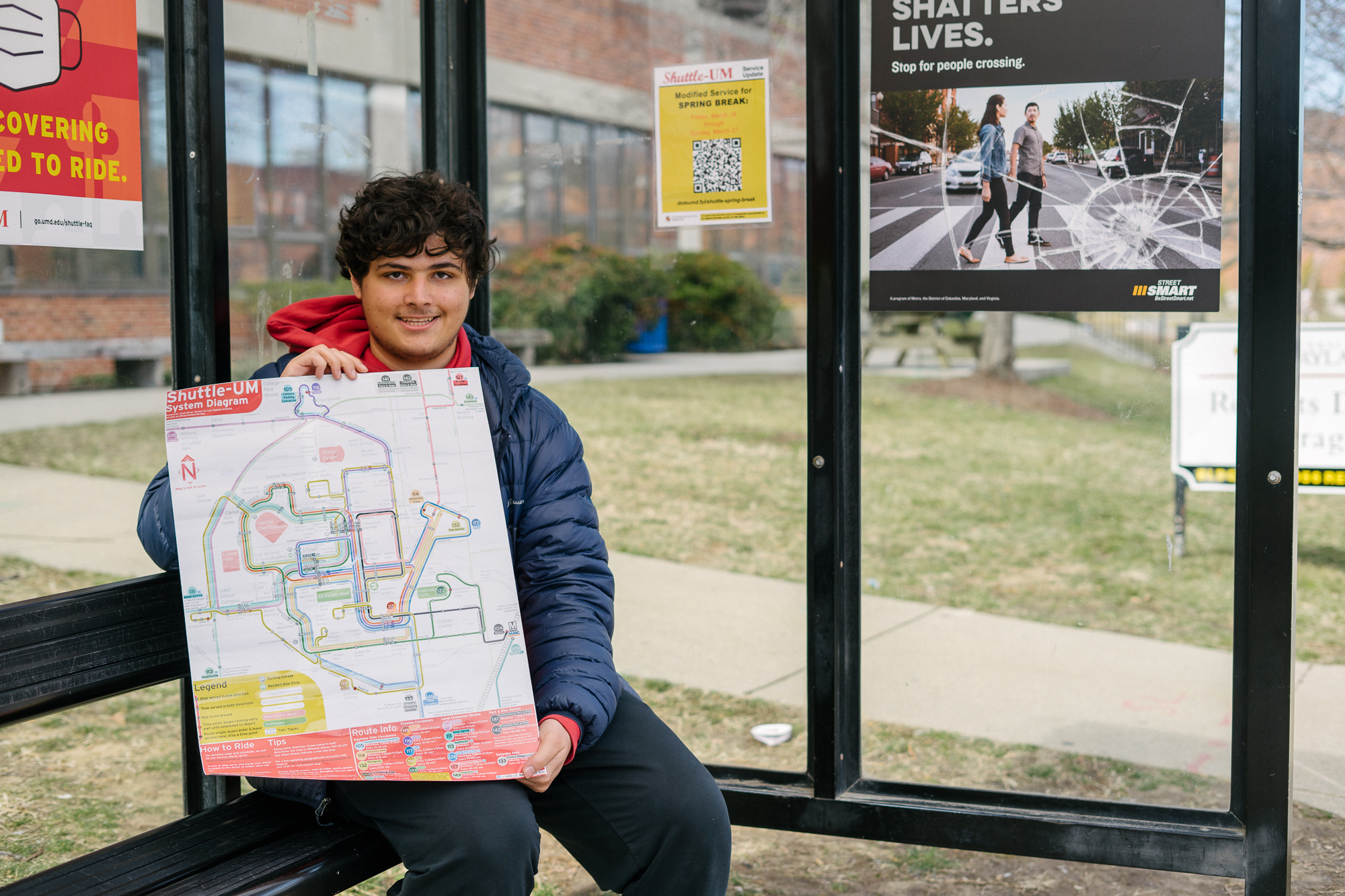 Ever since sophomore mechanical engineering major Jacob Glazer came to the University of Maryland in fall 2020, the idea of a complete Shuttle-UM map with all the routes clearly represented has been rolling around in his head.

“It just bothered me that there was no way to look at all the routes in one place,” Glazer said.

So Glazer decided he would use his two passions — public transportation and graphic design — to design a map that would compete with Umo, the university’s official Shuttle-UM route map.

Glazer had his first Shuttle-UM bus experience in fall 2021. That same semester, in December, he began working on his map. Last week, Glazer published the first draft of the map featuring the entire Shuttle-UM system on Reddit. Glazer’s post was the most popular last week in the UMD subreddit, garnering 475 upvotes and 67 comments as of Wednesday night.

Andy Yeh, an English graduate student, said newer students can struggle with finding their way around by bus.

“If you haven’t been here for a year, it’s hard to figure out how to get from one part of campus to the other,” Yeh said. “It takes time to learn the different shuttle routes.”

Disability specialist Marnie Marsh, who works at this university’s Accessibility and Disability Service, said she would appreciate a map like Glazer’s.

“I think one map would be helpful,” Marsh said. “It would be easy to see where all the buses go and what stop would be best for you.”

Glazer actually praised the maps of individual shuttle routes that can be found on the DOTS website, calling them “clear” and “well-designed.” Still, Glazer felt there was room to improve.

For instance, even though Umo’s map has arrows indicating the approximate direction the shuttles are headed, Glazer’s map has little arrows on the routes showing precisely where the bus will go.

Glazer’s map also has more color than Umo’s map and has various academic buildings and other important campus landmarks labeled. However, Umo’s map is interactive and gives an approximate GPS location of where the shuttles are on the route.

Glazer said most of the work to create his map was done in the last month or so. During that time, Glazer’s roommate, freshman aerospace engineering major Aidan Pulliam, said he would often hear Glazer working until 4 a.m.

“I’d just hear him clicking away on Adobe Illustrator … late into the night,” Pulliam said.

Pulliam said his roommate isn’t only fascinated with buses. He said Glazer has an “insane” knowledge of American public transportation systems and is very passionate about it. Glazer is bordering on obsessed, Pulliam joked.

“[Glazer] knows the most obscure things about trains all over the country,” Pulliam said.

Because Glazer is creating this map for his capstone project in the Design Cultures & Creativity living-learning program, Glazer wrote in his post that he welcomed “nitpicks” and “spelling corrections.” The commenters happily obliged, pointing out misspelled words, critiquing color choices and the prominence of certain words.

“Awesome work, this map looks amazing!” the Reddit comment from DOTS read. “If you would like our assistance or any feedback, please feel free to DM us. We would love to provide any help we can.”

Glazer said it was “really cool” to get some recognition from DOTS. Glazer also said Shuttle-UM Operations Planning Manager Jasper Shapiro reached out to him last Friday to discuss his map. Shapiro is also a sophomore environmental science and policy and supply chain management major.

DOTS has since said in a statement that the department will not be using Glazer’s map.

“Jacob’s Shuttle-UM system diagram is a tremendous accomplishment, and we applaud him for creating such a detailed and beautiful resource,” the statement said. “While we won’t be using this system diagram, we will keep its attributes in mind as we continue to expand and refine our collection of campus transportation maps.”

In the meantime, Glazer joked that he’s trying to keep his ego in check with all the excitement surrounding his new map.

“I’m doing my best not to let the attention get to my head,” Glazer said.