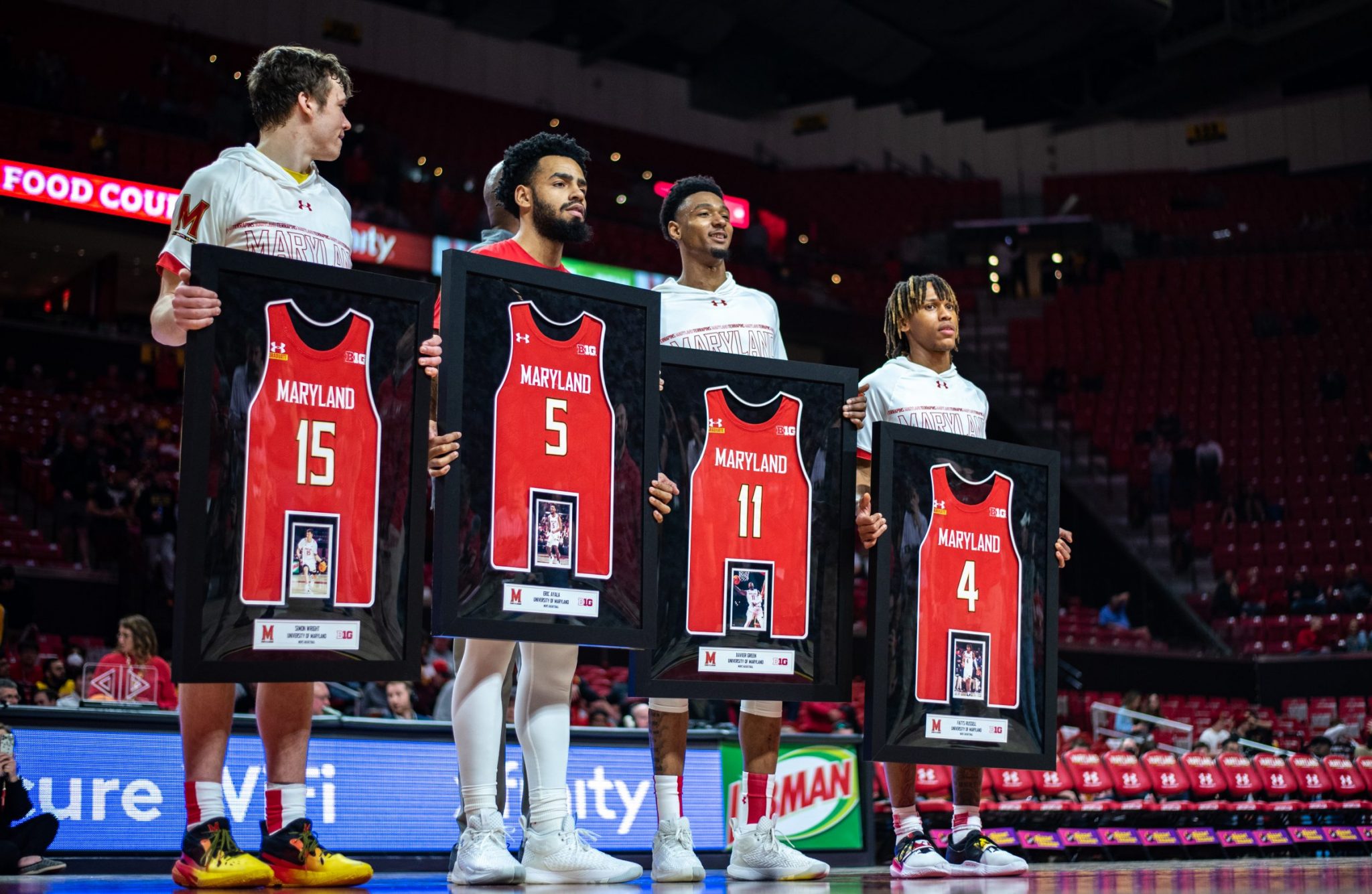 Fatts Russell and Xavier Green’s were both quiet.

Eric Ayala said he didn’t even get a senior celebration in high school.

As Maryland men’s basketball honored its seniors — new or old to the program — throughout Wednesday’s game against Minnesota, the four players finally got the chance to have their moment of honor.

“It’s definitely special for me,” Ayala said. “It’s kind of like one of the first ceremonial things I’ve ever had.”

Ayala has been with the Terps for all four years of his collegiate career. Whether it was in the spot he expected or not, it was the culmination of a memorable run with the program.

His fellow seniors don’t have the same history with Maryland. Even so, a season unlike any other has drawn them closer and left a long-lasting mark.

“Obviously, whatever the expectations were coming into the season, maybe we haven’t met them,” Wright said. “But, I think going through what we went through as a group, y’know you don’t really have a choice but to show up every day…and getting through it and just laughing through all the hard times has really brought us closer.”

For Russell, the bond is just as strong, but it was built before he even made it to campus. Growing up with Donta Scott, Hakim Hart and Ayala around the Philadelphia area, Russell transferred to the Terps from Rhode Island and the connection was built in.

Add a tight relationship with interim head coach Danny Manning — the two share a mentor in coach Larry Brown — and Russell’s fondness for the team he’s been with just one season feels like more than that.

“We’re like brothers, we enjoy being around each other, we have fun,” Russell said. “It just really feels like home, it’s going to be hard leaving here.”

Green and Wright similarly joined the program over the offseason via the transfer portal from Old Dominion and Elon, respectively. Both came to love the program and said it was an honor to don a Terp uniform, even if it was just for one season.

“It went way quicker than anyone thought it was going to,” Wright said.

The seniors had their moments come game-time.

Wright entered the game to thunderous adoration. Fans began chants for Wright early in the first half and they wouldn’t have to wait long for him to take the court for the first time.

Green — who was greeted by hundreds of Maryland supporters holding up his trademark ‘X’ — made his presence felt, scoring the Terps’ first three-pointer of the game.

“Being here and being on the team, a lot of people throwing the ‘X’ up…it was a great, great environment,” Green said.

Ayala did what he normally does: make big shots. It was the four-year Maryland guard that seemed to call game with a statement three. After the Gophers had drawn within two points for the first time in over 20 minutes, Ayala instantly responded and helped grow the lead out again.

And it was Russell who closed. Six makes from the free-throw line by Russell in the final 75 seconds of the game sealed the deal on a key win that brought the Terps back up to .500 for the first time in almost a month.

“I just wanted a win,” Russell said. “As long as we won, it was going to be a successful senior night.”

Maryland’s senior class has experienced a strange final year — one that none of them saw coming.

But despite all of it, they each got to say a final goodbye to their home crowd and with a victory no less.

“It’s just been a full experience that I wouldn’t take back,” Ayala said.