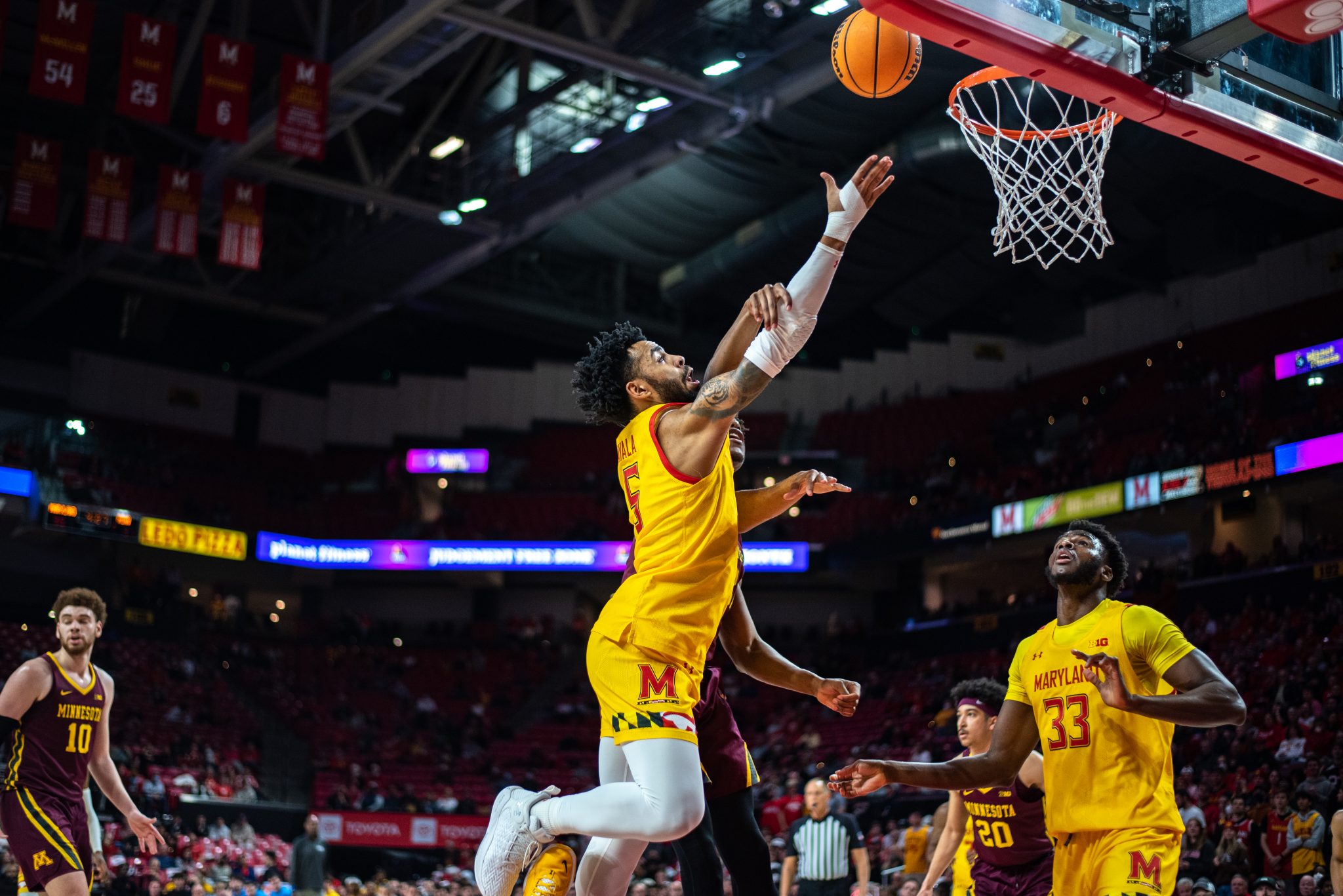 With just over two minutes to play in Maryland men’s basketball’s final home game of the 2021-22 season, Minnesota climbed close to the Terps’ lead.

Jamison Battle drained his seventh and final three of the night to bring the Golden Gophers within two points of Maryland, 70-68.

But Eric Ayala wasn’t having it on his senior night. He launched the ball from behind the three-point line. And it effortlessly swished into the hoop.

Just under one minute later, after he’d shot free throws, Hakim Hart did the same. His shot from deep dropped into the basket, and after seeing the Terps make just four three-pointers all night, the Xfinity Center crowd erupted into thunderous screams and applause.

After shooting poorly from deep in comparison to Minnesota’s prolific early three-point shooting, Maryland came alive from behind the arc just when it needed to. The Terps left the Xfinity Center for the final time in 2021-22 to a standing ovation from fans and a 84-73 victory over the Gophers.

“The way they was guarding and the way we was running I knew I was gonna be open so I was ready like two plays before,” Ayala said. “The way that he stepped up and guarded me, when he came to me I was already ready to go. I was ready.”

It was a tale of two offenses.

Minnesota rained three-pointers on the Terps. The Gophers dropped 11 makes from behind the arc. Battle was particularly lethal from deep. He drained seven three-pointers and finished with 39 points.

The Terps opted for a different strategy. Maryland took one of interim head coach Danny Manning’s favorite energy-generating behaviors — paint touches — and put it to good use.

Maryland pounded the paint and clocked 46 of its 84 points from close range. Minnesota finished with just 16 points in the paint.

Neither team’s defense was particularly prolific to start the game. One of the sole defensive highlights of the opening half was a huge block by Qudus Wahab. Battle dribbled to the hoop to take a layup and Wahab smacked the ball out of the air and into Ayala’s hands.

Willis went on to make another three in the half and Battle drained four of his own. Comparatively, Maryland shot poorly overall from three, ending with a 32 percent clip.

The Gophers’ defense was no match for Maryland in the paint, however. Twenty-eight of the Terps’ 41 first-half points came from down low. Minnesota only had six.

Fatts Russell drove for a layup, jumped into the air and dumped the ball to Wahab. Wahab pulled the ball out of the air and rose to the rim — he slammed the ball into the net to great fanfare from the Xfinity Center crowd.

Later, Russell attempted a hook shot from below the rim that was blocked. Hart got redemption for him. Hart hooked a shot that kissed the backboard and fell into the net.

Early on, Donta Scott took a layup that hung on the rim before falling through the lace to bring the Terps within one of the Gophers, 19-18.

Xavier Green hit Maryland’s first three of the half at 10:11. The Terps didn’t let go of that lead for the rest of the half. Threes from Scott and Ayala and a fast-break layup from Hart quickly put Maryland eight points ahead of Minnesota.

Despite a near three and a half minute lull for the Terps to end the half, four points from Battle were not enough to make up the difference for his team. Maryland went to the locker room up, 41-37, on the Gophers.

Battle carried his shooting success into the second half. He dropped Minnesota’s first 12 points of the second 20 minutes — he was its only scorer for almost 10 of those minutes.

“He was making some tough shots, over hands, over two people” Russell said of Battle. “This is all a credit to him, he had a hell of a game today.”

Maryland look as much as a 13-point lead toward the middle of the half, in no small part due to contributions from freshman Julian Reese in the paint. Reese dropped 12 points, eight of them coming in the second half, to bolster his team.

But the Gophers fought back to close the gap and battle with the Terps to end the game. Sean Sutherlin, Battle and Willis contributed to Minnesota’s fight back.

The Gophers didn’t do enough, though. Ayala and Hart’s threes and multiple trips to the free-throw line for Russell lifted Maryland too far ahead of Minnesota.

Ayala, Green, Russell and Simon Wright walked off the Xfinity court victorious in their last home appearances. And the Terps sit just one win away from their 29th straight winning season.