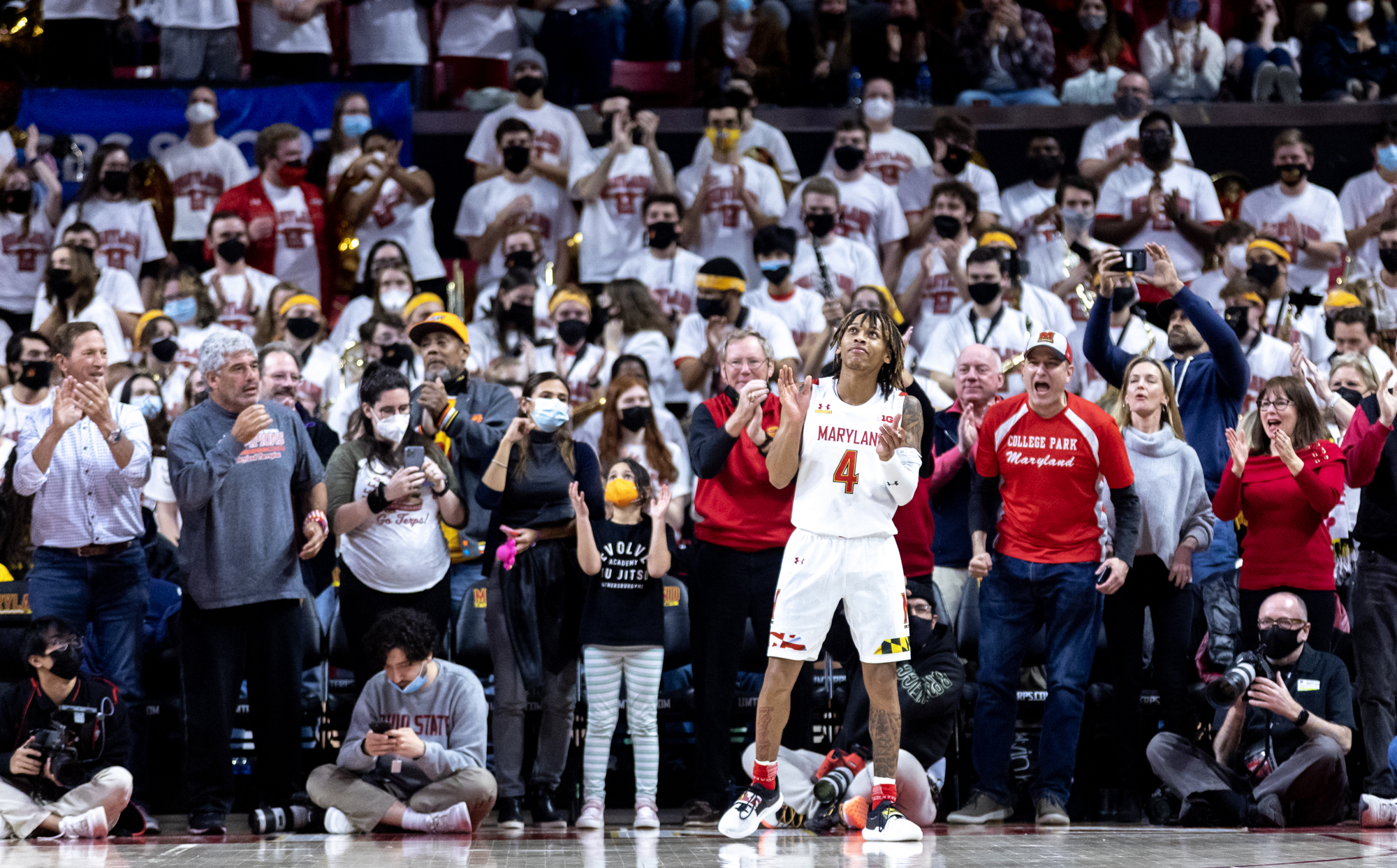 Fatts Russell claps while looking up at the video board during Maryland men's basketball's 76-60 win over No. 22 Ohio State on Feb. 27, 2022. (Julia Nikhinson/ The Diamondback)

Maryland men’s basketball entered the 2021-22 season with 28 consecutive winning seasons under its belt.

The Terps are just one of three Division I programs to boast such a feat — only Arizona, Kansas and Maryland have an active streak of 28 or more winning seasons in a row. The Terps’ last losing season was in 1992-93.

In the throes of Big Ten play, a winning season seemed out of reach for a Maryland team that experienced some turmoil in the form of the first head coaching change in 11 seasons.

But in recent games — particularly after an upset victory over No. 22 Ohio State — interim head coach Danny Manning’s squad still has the potential to stretch its winning record once more.

The Terps now sit at 14-15 and have just Minnesota (13-14) and Michigan State (19-9) in their way of yet another victorious slate. And winning out certainly seems doable.

“We got a lot of competitors, man, we got a lot of guys that live for these kind of moments,” Eric Ayala said after Maryland’s 75-60 win over the Buckeyes. “I feel like we all been put on the back burner once in our life. . . we all come together and we fight, we fight for something.”

Since the last time the Terps played the then-No. 13 Spartans, they’ve fallen out of the top-25. But even while Michigan State was ranked, Maryland kept pace. The Terps ended up falling by just two points against a fearsome ranked opponent.

Against Ohio State, Maryland did what it was unable to do against the Spartans — play a more consistent game of basketball.

The Terps fell behind early against Michigan State. They shot just 36 percent in the first half but were able to recover with 50 percent of their shots falling in the second half. Maryland outshot the Buckeyes in both halves of play and maintained more consistency while doing so. They opened the game shooting 43 percent and improved to 50 percent the following half.

Ayala and Fatts Russell combined for 50 of Maryland’s 75 points against Ohio State. They combined for half that number against Michigan State.

Manning’s squad’s defense was also far more commanding than its last matchup with the Buckeyes.

E.J. Liddell, Ohio State’s leading scorer who averages 19.6 points per game, dropped 25 points in the teams’ last meeting on Feb. 6. Zed Key followed in the score column with 14 points of his own. But not a single Buckeye registered more than 13 points on Sunday and the Terps held them to just 36 percent shooting.

Moving forward, Maryland has yet to play Minnesota this season, but the Golden Gophers will arrive at the Xfinity Center on a two-game losing streak. Conversely, after beating the Buckeyes, the Terps will have momentum on their side.

It is possible that Maryland could earn its final two wins to secure its 29th straight winning season and finish its regular season with a bang. But, despite the possibilities and his team’s uptick in wins, Manning subscribes to the coach’s cliche — he’s taking the rest of the season one game at a time.

“We’re just worried about the next one,” Manning said. “It’s one at a time. That’s the mindset especially when you get to March.”

Russell is a bit more confident, however. He was asked about what he felt the ceiling for the team was after he and Ayala posted high-scoring numbers against the Buckeyes. Ayala looked over at Russell as he spoke the word that often sparkles in diamonds around Russell’s neck: