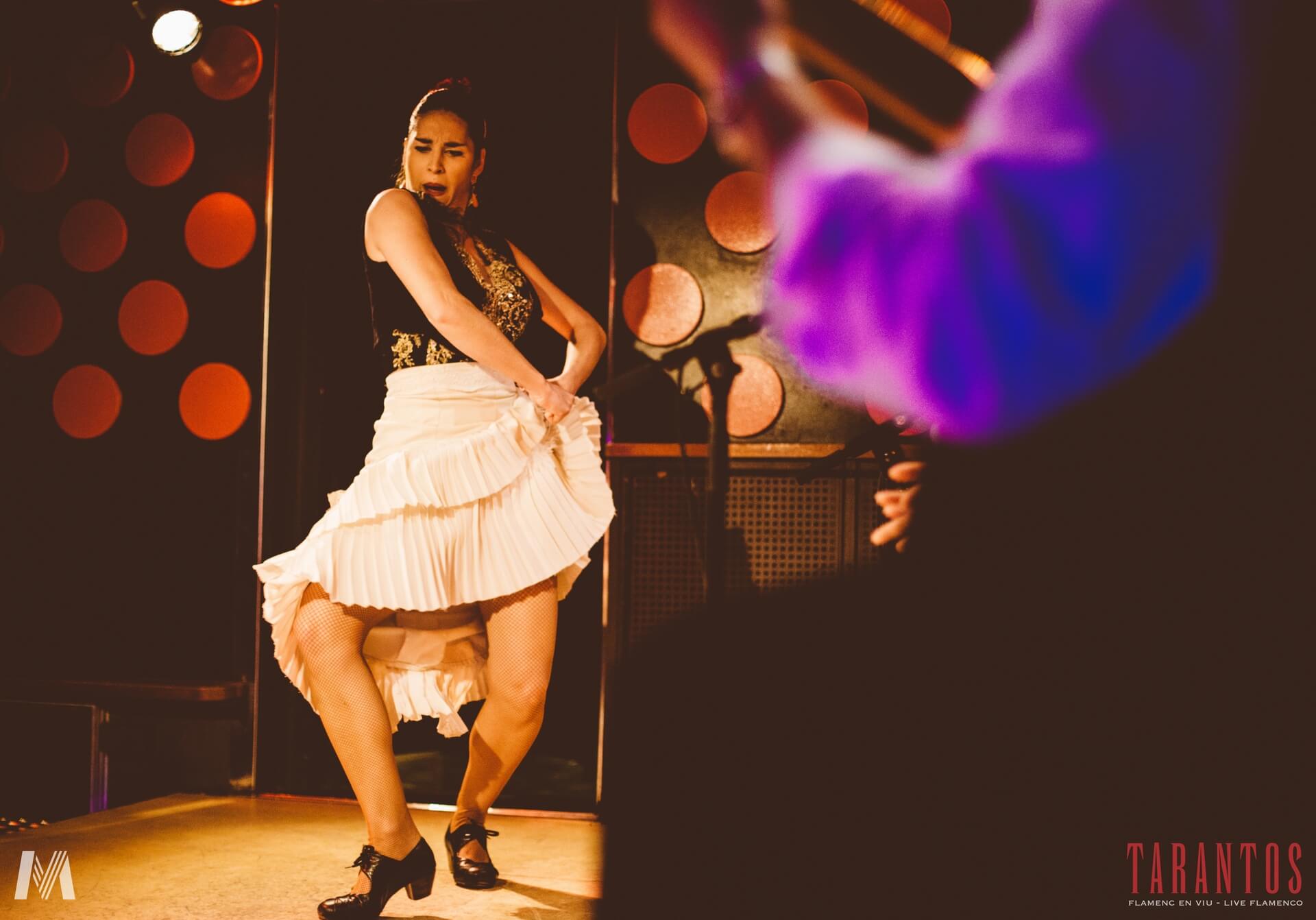 A flamenco performance on April 20, 2019. (Photo by Marta Vilardell via Los Tarantos website)

BARCELONA, Spain — A guitarist in a black button-down shirt with white polka dots sat on stage, vigorously strumming his acoustic guitar. Beside the instrumentalist, a woman in a green flamenco dress stomped her foot and clapped while she sang in Spanish.

In front of the musical duo, two flamenco dancers commanded the small corner stage at Los Tarantos, the oldest tablao theater in Barcelona, Spain, according to the theater’s website.
Draped in form-fitting, silky dresses with smocks and ruffled bottoms, as well as the traditional polka dot design, the two dancers took turns charming the audience with their rhythmic feet stomping.

Los Tarantos has been home to authentic flamenco programs in Barcelona since its opening in 1963, according to its website. Lining up both big-name and rising local artists, Los Tarantos shares the world of passion in this centuries-old art.

Known for having a wood stage that offers an ideal sound for flamenco dancing, tablao stages also help protect dancers’ joints as they undergo constant impact from stomping.

The steel shanks underneath the dancers’ shoes smacked down onto the black wooden stage at Los Tarantos, scraping the floor when the dancers slid. Powerful and crisp sounds corrupted the air after each strike of the dancer’s heel, leaving the percussions of flamenco to resonate in the dark, club atmospheric room.

“I liked the way that they would feed off each other’s energy,” said Eliza Merriam, a junior psychology major at the University of Maryland.

“[They] kind of do parallel dance moves,” she added. “First, they move slow, and then they put on this, you know, powerful performance and there’s foot-stomping and they’re moving around and there are facial expressions, and it’s just really high energy and then it slows down again.”

The dancers lifted their skirts to reveal their tapping toes and hard-hitting heels hidden underneath their layered gowns. Throwing their arms up above their heads, the two dancers’ faces were locked in intense conviction as they focused all their energy on their meticulous movements.
Audience members who were familiar with flamenco would make call-outs during important parts of the show, noted Ari Bailey, a junior computer science major at this university. The dancers seemed to go back and forth with the audience, bringing a participatory aspect to the show.

Although flamenco is deeply rooted in Spanish culture, the tablaos’ origins are relatively recent. The first tablaos emerged in the mid-20th century, acting as a substitute for old Cafés Cantantes, which were the first places to offer public flamenco shows.

When migrants from Andalusia, the primary region of reference for flamenco, migrated to Catalonia, they brought the flamenco tradition with them.

In Barcelona, these cafés were extremely popular, reaching 74 Cafés Cantantes by the end of the 19th century. As the cafés dissolved, tablaos took on the responsibility of providing a social atmosphere around Andalusian art.

Flamenco was even declared an intangible heritage of humanity by UNESCO in 2010 due to its gamut of purposes and means of expression.

“The style of dancing is so entertaining,” Trabulsi said. “The women never stopped moving for the entire time they were on the show.”

The dancers lifted their skirts like props, speeding up and slowing down to the tempo the guitarist controlled. A soothing classical Spanish guitar interlude quickly became layered with the claps and stomps, displaying a virtuosic setlist that gave way to the upbeat yet dramatic narrative of the show.

Flamenco shows the evolution of Spanish culture as it incorporates both traditional and modern narratives. Expressing sincerity within the drama, and even interweaving peaks of emotional highs and joy, the flamenco dancers demanded the audience’s attention. Eyes and ears couldn’t escape the colorful dresses and swift spins.