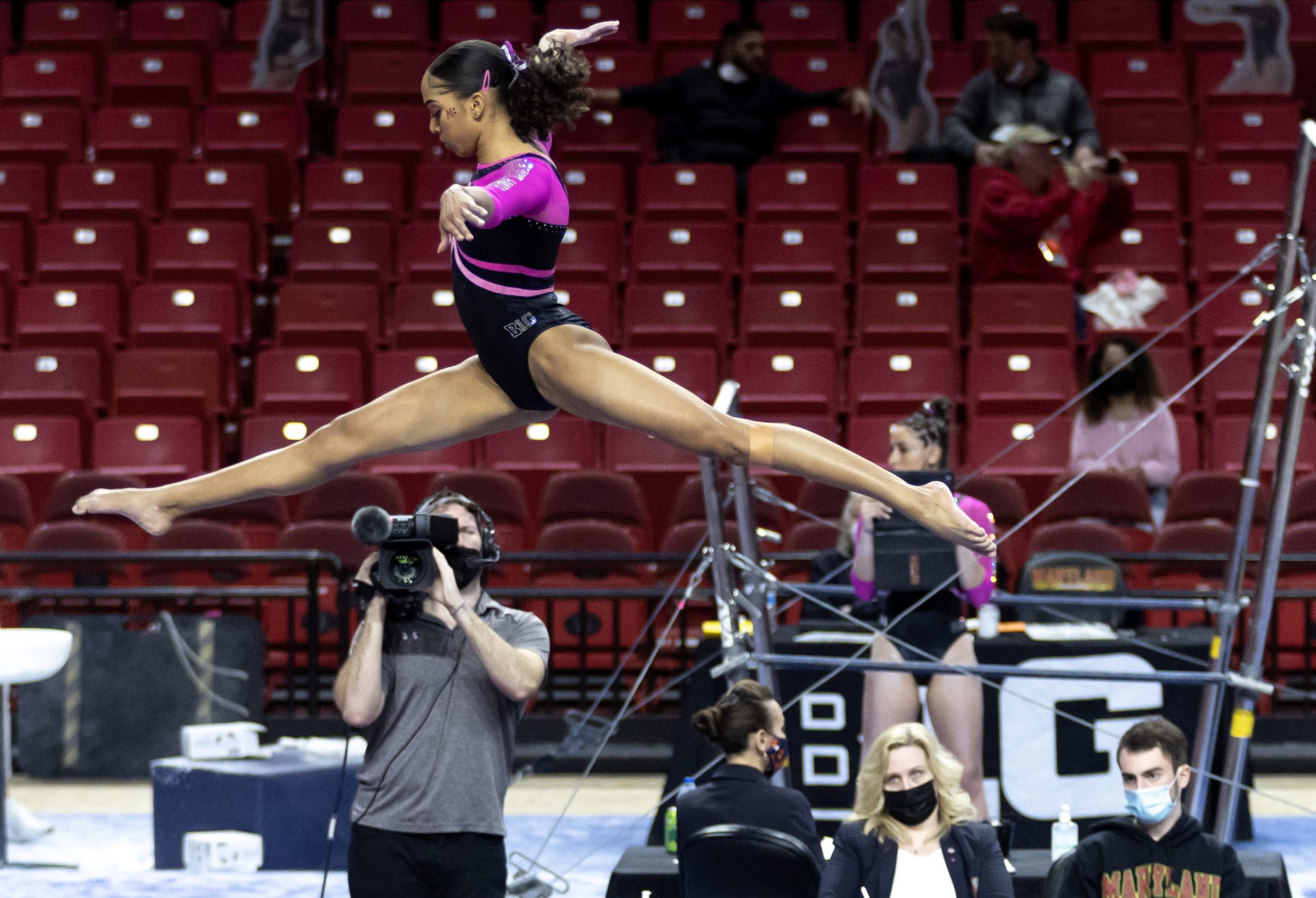 Audrey Barber leaps in the air during her beam routine during Maryland gymnastics' win at the Terp Tri on Feb. 14, 2022. (Julia Nikhinson/TheDiamondback)

Heading into its final rotation, Maryland gymnastics led Penn State, 146.975-146.950 — but once there, the Terps put up the lowest-scoring rotation of the meet at the beam and the Nittany Lions put up the highest of the day on their floor routines.

It was more than enough to separate the two in what had been a neck and neck competition. Maryland finished almost a full point behind Penn State, falling, 196.400-195.425.

Beam has been the lowest-scoring event for the Terps all season. Maryland’s beam group came into the meet averaging 48.458, ranked 50th in the nation.

While that mark is weighed down significantly by an outlier of 46.600 in the first rotation of the season, even disregarding that performance, beam remains the lowest-scoring rotation for Brett Nelligan’s squad.

On Saturday afternoon, Maryland put up an underwhelming 48.450, its second-worst score on beam this season.

“We had the one fall, we didn’t have to count it and no other major mistakes [were made], but, we want to be great on beam, and I think we’re capable of that,” Nelligan said. “Today we were good. And unfortunately, that wasn’t enough.”

On beam, Audrey Barber was the only Terp to score above 9.8, earning a 9.825. Maryland’s other five beam competitors averaged only 9.505.

She put up Maryland’s highest score in every event, despite enduring a heel injury on beam during last week’s Big Five meet.

“[Barber] brings that stability,” Nelligan said. “[Since] we have Audrey at the back, and she’s consistent, we can be a little more aggressive with some of the routines at the beginning of the lineup. She sets that calm, confident tone for everybody.”

The beam fall that Nelligan referred to was from Reese McClure, who scored an 8.900. McClure, who was an All-Big Ten selection last season, has yet to return to her peak since coming back from a severe ankle sprain suffered in December.

“It’s hard [mentally]. What I’ll say for her is that she’s a really tough kid and I know that ankle still hurts,” Nelligan said. “It’s really hard to have the same type of confidence [when hurt] that she had when she feels 100%. She’s a warrior and she has nothing but support from me.”

McClure has averaged 9.48 since returning to competition. Despite her struggles on beam, the team is hoping for her to return to the floor lineup in the next week.

With a four-meet stretch in the span of ten days starting on Thursday, Nelligan said decisions about McClure’s floor status will likely be made based on how she looks in practice on Monday and Tuesday.

Unfortunately for the Terps, though, McClure is far from the only injured member of the lineup — Nelligan said the entire vault lineup, who still managed to score 49.000, is dealing with injuries.

“Their toughness is second to none. They’re all hurting. And it’s that middle part of the season that we have a pull coming up, so I’m really proud of how tough they are. And there’s no quit in this group,” Nelligan said.