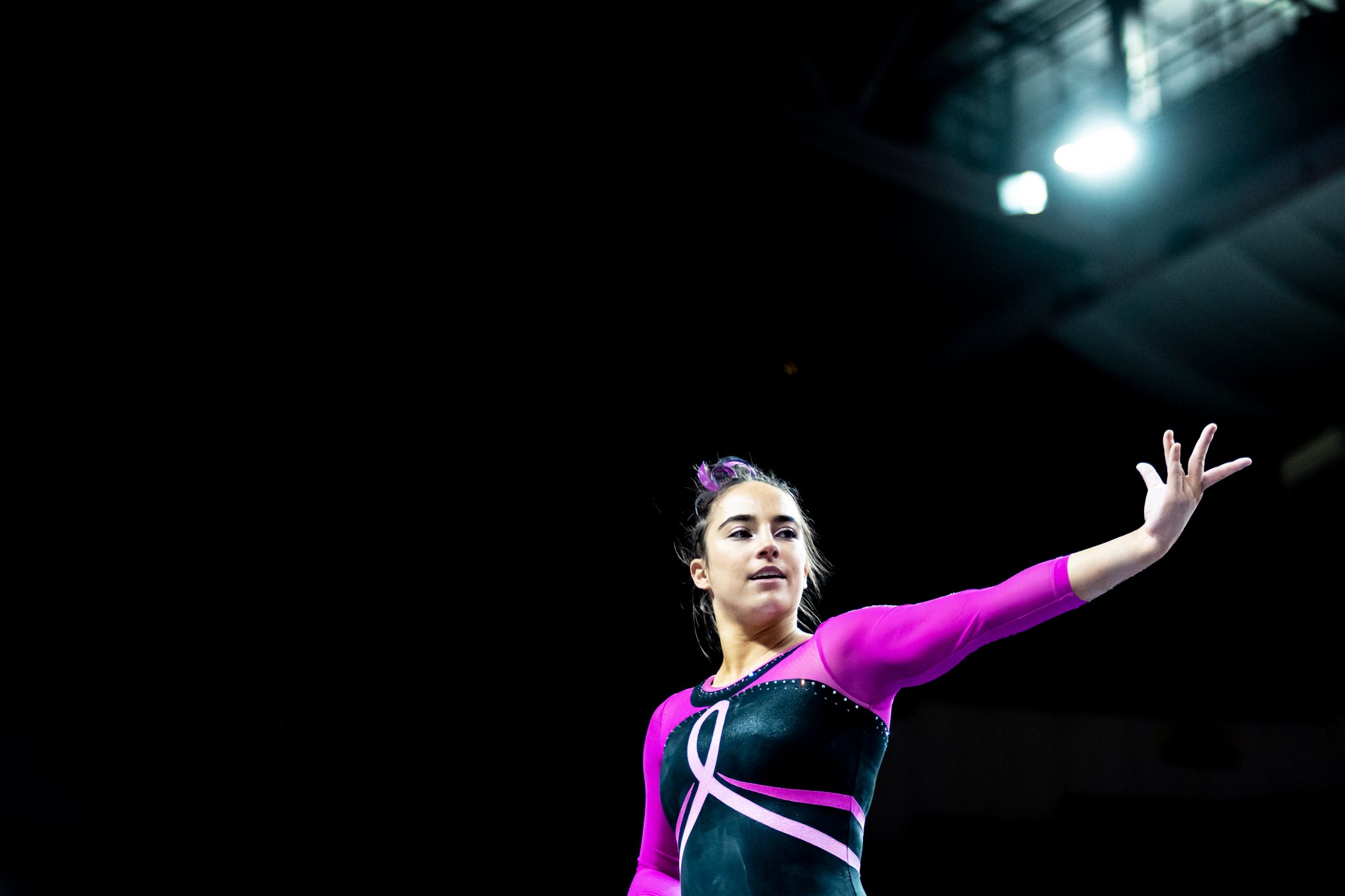 Emma Silberman raises her arm during a routine in Maryland gymnastics' Tri-Meet win over Minnesota and Pitt on Monday, Feb. 14 (Julia Nikhinson/The Diamondback)

Maryland gymnastics fell to four conference opponents in the annual Big Five meet in Toledo, Ohio on Friday, as the 195.725 points posted was the Terps’ lowest mark in nearly a month.

The score — Maryland’s lowest since January 22 against Rutgers — shows how much of a roll the team was on. But with the strength of the Big Ten, respectable scores don’t earn wins. The Terps would’ve needed to continue its streak of 196-point performances for any chance at a victory.

Coach Brett Nelligan said he told his team he doesn’t generally believe in moral victories — but Friday might’ve been an exception.

On Thursday, after boarding their flight to Detroit that originally was said to have a standard delay, the Terps were later informed that the flight was canceled.

After waiting two hours to retrieve their bags, they rushed to find a flight, but were unable to do so, according to the team.

They were planning to do some driving — the trip from Detroit to Toledo is about an hour on wheels — but the cancellation turned their one hour bus-ride into a much longer trip.

After a Walmart pitstop where Audrey Barber and coaches JJ Ferreira and Hilary Steele purchased pillows and blankets for everyone on the team, the Terps took a bus from BWI to Pittsburgh, arriving at around midnight.

The team then stayed the night, and got back on the road early Friday morning to head to Toledo and compete.

All things considered, Nelligan thought it would’ve been easy to see his team’s score drop down to where it was in the first two meets. But it didn’t, and for that, he’s proud of his group.

“We think we’re a mid-to-upper 196 team. If I’m being honest, considering the travel, being on podium, and competing with four top-26 teams, I’m not disappointed [with our score],” Nelligan said.

Like the Big Ten Championship meet, the Big Five is competed on a podium. Given the hollow underneath, there’s a different bounce and feel to the surface.

Nelligan says it typically takes a few turns to adjust to the differences on podium. With experience under their belt, Nelligan hopes it’ll have the Terps more adept there come postseason.

“It’s invaluable getting [those] experiences,” Nelligan said. “When they get to Big Ten [championships] hopefully they’ll acclimate to it. It turns gymnastics into a premier event.”

The sweep brings Maryland to a 6-18 record in the annual Big Five meet.

Despite falling short to No. 1 Michigan, No. 22 Ohio St., No. 26 Illinois and No. 17 Iowa, the Terps’ score was tied for their highest Big Five score in their six years competing in the meet.

Had Maryland put up the score it did Friday in each of the previous five seasons, it would’ve entered the meet at 9-11 rather than 6-14.

The fact that the Terps went 0-4 with that score this year but would be near .500 in the previous five years shows just how much the Big Ten conference has improved.

In the defeats, Audrey Barber scored a season-low 38.675 in the All-Around. But despite a forgettable performance Friday, she became the second-highest all-time scorer in program history.

Barber now trails only Rachel Martinez. With 1957.775 total points scored, Barber is only 81.325 points away from Martinez’s record. At her current pace, that’ll only take three meets.

Barber’s best performance came on floor, where she scored her third consecutive 9.900. Floor was also the event that the Terps did best on as a team,  the first time this season where it was their highest-scoring event.

“After floor, I was really pleased. You start on that first event and there’s gonna be nerves, but they didn’t show any,” Nelligan said.

Despite it being their best event coming into the day, Nelligan’s squad scored a season-low 48.725 on vault Friday evening.

Maryland had at least three gymnasts score above 9.800 on vault in each of its last three meets. On Friday, they had zero gymnasts higher than that mark for the first time this season.

It caused no long-term concern for Nelligan, though. Adjusting to podium alone is a challenge, never mind the hectic and unorthodox travel that makes competing at an elite level an even taller task.

Unlike last the previous week, where the Terps had a packed schedule, Nelligan’s squad now has some time to rest before getting back to the gym for a full week of practice.

“Having a full week of practice we can go back to dialing the details,” Nelligan said. “There really wasn’t any time to get back to neutral and build ourselves back up again [last week].”

This week, Maryland will get to go back to the gym to re-polish for its meet on Saturday at Penn State, where the Terps hope to elevate their score back into the upper 196 range.

“We made all the routines we needed to make but they weren’t as clean or sharp,” Nelligan said. “ [we were] surviving, not thriving.”