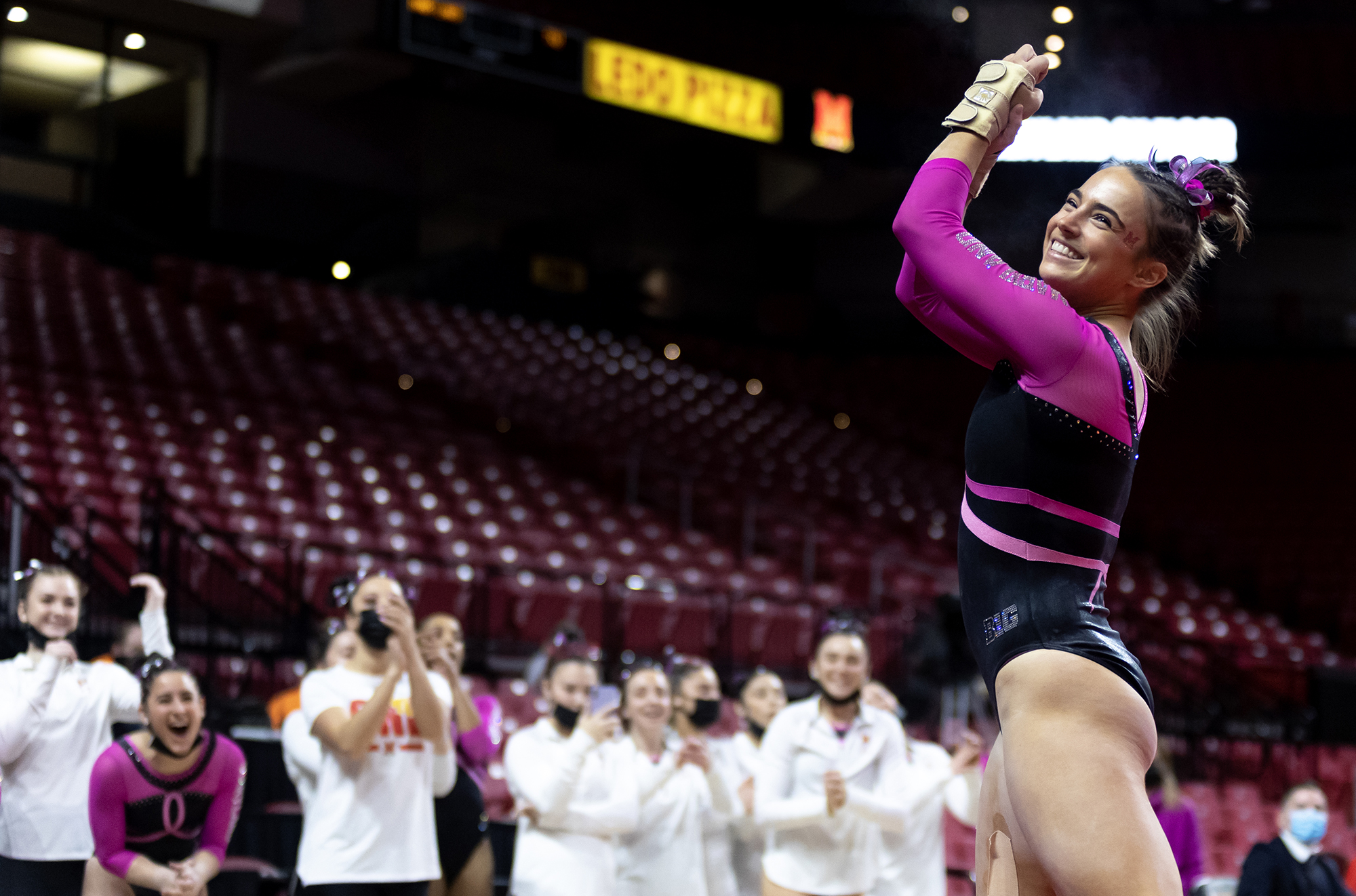 Following its Terp Tri win, where Maryland gymnastics posted its fourth-highest score in program history, the Terps enter the heart of their schedule already in mid-season form.

Fresh off of victories over Pittsburgh and No. 6 Minnesota, the highest-ranked victory in program history, Maryland will have its strong form challenged.

The Terps will battle top-ranked Michigan, No. 17 Iowa, No. 22 Ohio St. and 26th-ranked Illinois Friday night in Toledo, Ohio, in the annual Big Five meet.

Although Maryland averages the lowest score amongst the five teams, coach Brett Nelligan and his squad think their recent scores in the Terp Tri as well as their dual-meets against Nebraska and Michigan St. are more representative of the team they are.

With the recent success, the Terps will take their confidence from College Park to Toledo.

“For us to gain this type of confidence is going to be really helpful. We’re gonna get in the gym, work really hard and then go in on Friday with all the confidence in the world,” Nelligan said following the Terp Tri.

Maryland has improved its score in every meet this season with the difference between the season-opener and Monday’s victory being nearly four points. It’s unfair to expect that trend to continue given how high that score was. That’s on top of the fact the Terps will be in a different gym surrounded by some of the nation’s best talent. Nevertheless, Nelligan feels his team is strong regardless of what gym they’re competing in.

“We take a lot of pride in competing here in Xfinity on the main floor and we want to protect it with everything we got. But I’ve been proud of this team on the road and you saw it at Michigan State, they’re a good road team so if we can go in with some confidence. I think we can do some damage,” Nelligan said.

The meet in East Lansing was the Terps’ third of the year. There, Maryland set its season-high marks in all four events.

While three of those four event scores have since been topped in the Terps’ last two meets, the road win against the Spartans was the start of Maryland’s recent run of high scores.

Following the Michigan St. dual, Nelligan began expressing that the Terps’ score — which was 195.950 against the Spartans — is far closer to what he and his coaching staff see from his team in practice every day compared to the underwhelming 192.925 and 194.925 posted to open the season.

The teams’ scores against Nebraska and in the Terp Tri support Nelligan’s claim about the first two meets being uncharacteristic.

But now, Maryland — who’s only had one full practice in the last week due to a packed schedule — is tasked with keeping its score where it’s been the last few meets in order to compete against top-tier talent.

The team, while overall getting healthier, is still dealing with its fair share of injuries.

Reese McClure, who suffered a severe ankle sprain in December, is still competing exclusively on beam and has yet to put up the big numbers she did last season that gave her All-Big Ten second-team honors.

[Maryland gymnastics beats Pitt and No. 6 Minnesota in biggest upset in program history]

Elizabeth DeBarberie competed on vault, bars and beam in every meet prior to taking a fall off of the bars last Friday and proceeded to miss beam on the next rotation. She did compete on bars and beam, sitting out on only vault, Monday.

Sanya Glauber has been nearing a return to bars, where she competed in an exhibition on Monday. Glauber shares the record of highest bars score in Maryland history.

Despite the injury complications, though, the Terps are on a roll, and look to carry their momentum all the way to their next meet, where they’ll be squaring off against four of the top programs in the nation.