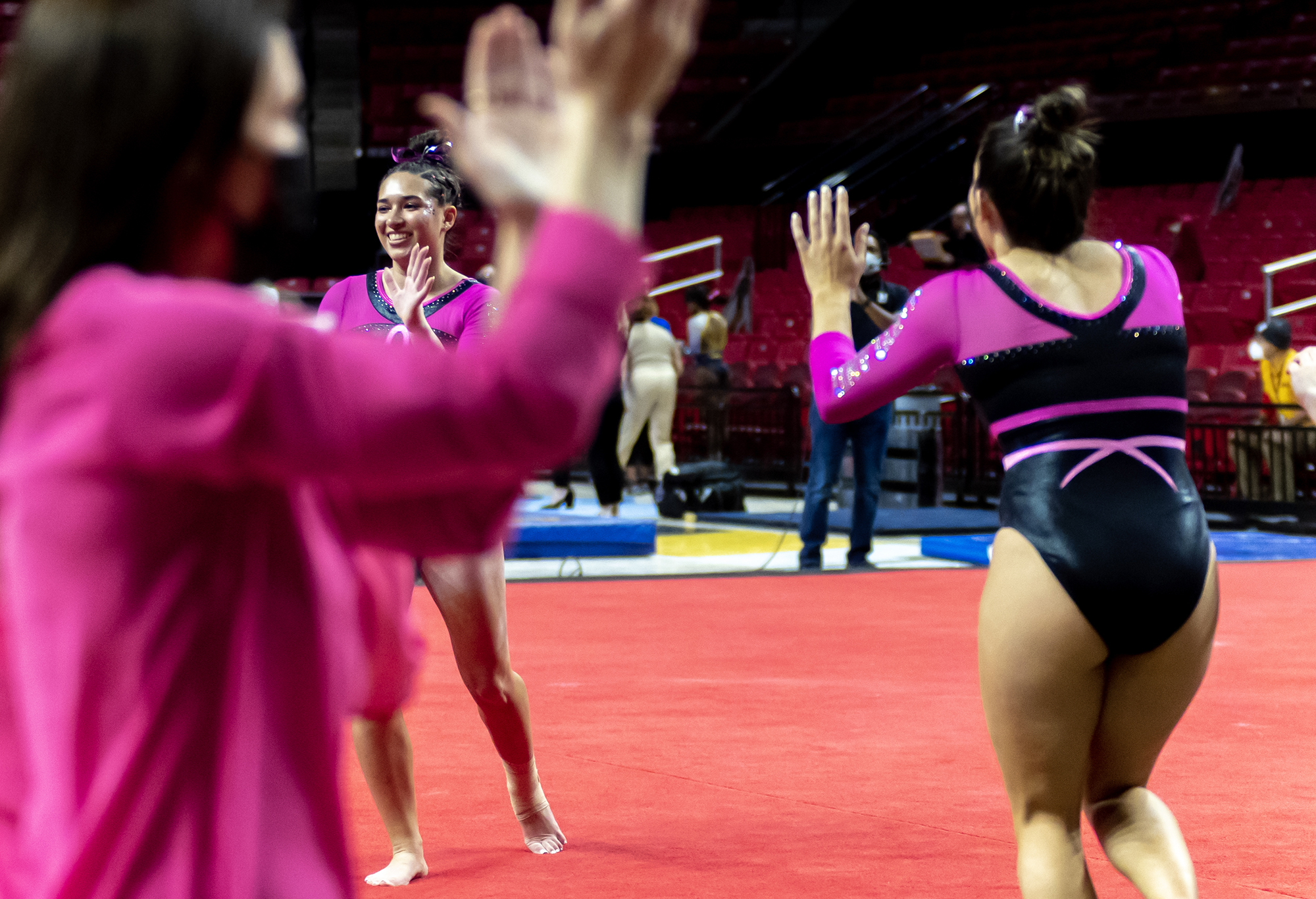 Maryland gymnastics knows it can count on Audrey Barber to put up big numbers, Alexsis Rubio to give a hit vault routine and Emma Silberman to deliver in all four events.

After breakout performances, the Terps can also rely on freshmen Josephine Kogler and Sierra Kondo for strong lead-off performances on vault and bars, respectively.

But what the team likely didn’t know it could count on was its gymnasts lower on the depth chart — particularly on floor — the unit with the most lineup changes this season. In Maryland’s wins over Pittsburgh and No. 6 Minnesota on Monday evening, it might’ve found some reliable contributors.

Tayler Osterhout and Alexa Rothenbuescher didn’t have typical paths to the floor lineup for Brett Nelligan’s squad, but have now become potential mainstays.

“[Osterhout and Rothenbuescher] are turning into kids we can count on, that we can depend on. When we need someone to close the meet, having Tayler, Alexa and Audrey at the back [of the floor lineup], that’s as good as any other back-three in the country,” Nelligan said.

Osterhout was originally slated to compete in vault and floor in the Terps’ first meet on Jan. 16 before suffering a bone bruise while warming up that day. Rothenbuescher then replaced her on the floor.

Rothenbuescher, a sophomore, didn’t appear in competition her freshman year. Even so, she put up a 9.800 in her unplanned debut and was the Terps’ highest floor scorer of the day.

[Maryland gymnastics beats Pitt and No. 6 Minnesota in biggest upset in program history]

“Honestly, it really meant everything to me, I really just wanted to be there for my team,” Rothenbuescher said following her debut.

Despite being a meaningful moment and a sign of optimism, the floor unit still needed work. In Maryland’s second and third meets, Rothenbuescher’s scores dropped to 9.450 and 9.675 — the Terps’ lowest and second-lowest scores on floor, respectively.

Following the disappointing scores in the Terps’ next two meets, Nelligan stuck with Rothenbuescher, and his decision paid off.

Rothenbuescher admits being on the sidelines for her entire freshman year wasn’t ideal. Because of her last two performances, it is almost certain she will avoid the sidelines this year.

Rothenbuescher picked up the pace Friday and Monday, scoring 9.850 on floor in both of the last two meets. Rothenbuescher, who has scored 9.8+ in three of Maryland’s five meets, is the only Terp aside from Barber to score multiple 9.8+’s on floor this season.

Unlike Rothenbuescher, Osterhout was originally going to be a starter for the Terps and competed for Maryland as a freshman. However, she didn’t compete on floor, and when she made her floor debut on Monday, it was unplanned, just as Rothenbuescher’s was.

Heading into the weekend, Nelligan said he wanted to use Osterhout in an exhibition spot to ease her back into competition. However, due to Kogler dealing with ankle soreness, the Terps needed a replacement, and Osterhout rose to the occasion.

Osterhout also scored 9.850 on Monday in an impressive season-and-event-debut despite returning from injury.

“I’m super excited to be back and competing, especially for this floor lineup, we’re definitely building here and I can’t wait to see where the floor lineup goes at the end of this year,” Osterhout said.

Despite their unorthodox paths to the floor lineup, Osterhout and Rothenbuescher turned into floor gymnasts Nelligan can trust.

Nelligan has tested nine different gymnasts on floor this season — two more Terps have participated in floor than in any other event.

With the lack of certainty about the best six to go with each week, Nelligan may have just found large pieces to his puzzle in Osterhout and Rothenbuescher, who have epitomized what it means to be the next-gymnast-up.