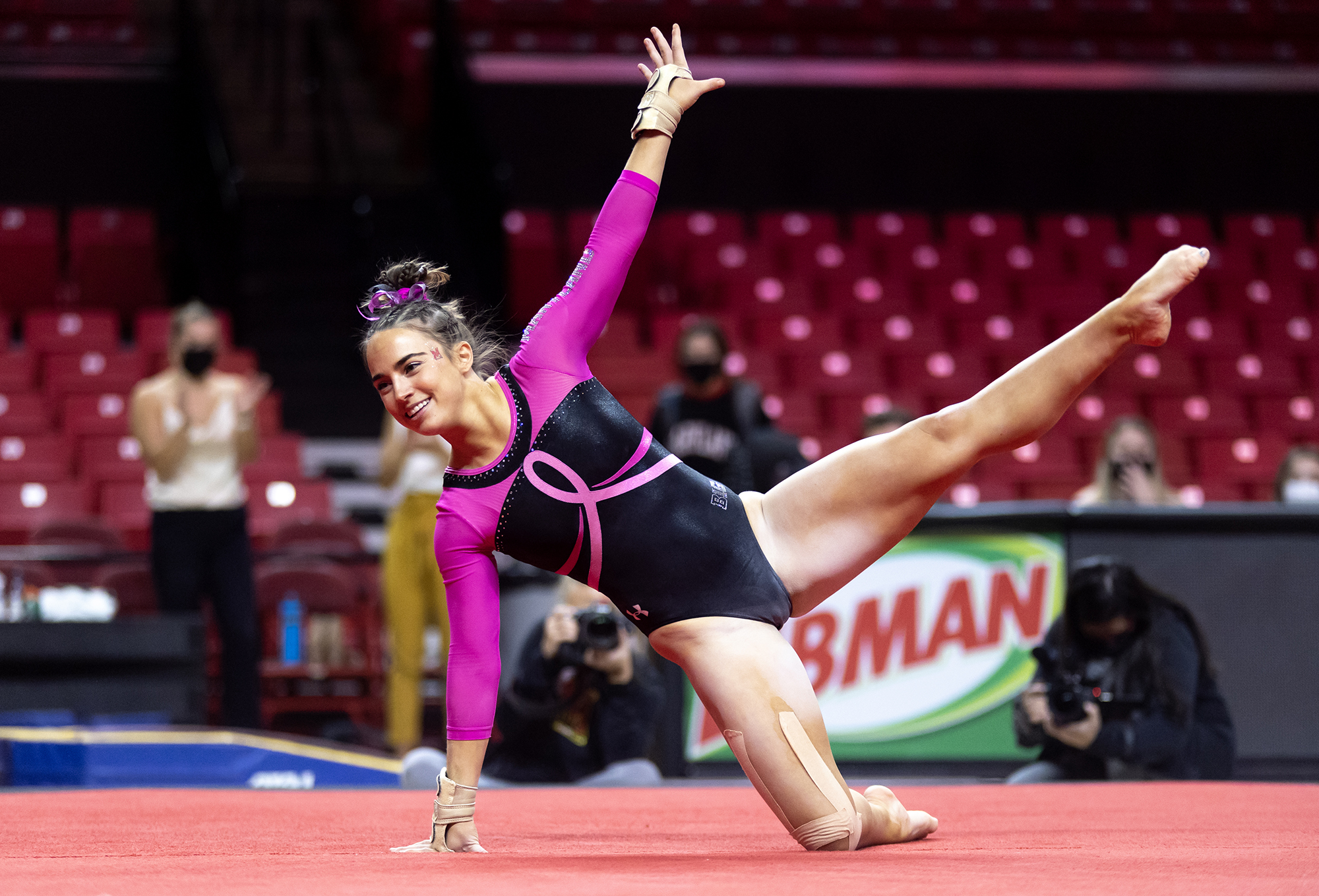 Emma Silberman does her floor routine during Maryland gymnastics’ tri-meet win over Minnesota and Pitt on Feb. 14, 2022. (Julia Nikhinson/The Diamondback)

After a fifth-place, 195.725-point finish in the annual Big Five meet, Maryland gymnastics was given a luxury often taken for granted: practice.

With just one practice in the week leading up to Big Fives and travel complications, the Terps found themselves a tad rusty in Toledo, Ohio.

Coach Brett Nelligan thought his team did what it needed to do, but didn’t go above and beyond, they were surviving, not thriving.

With time in the gym prior to Maryland’s meet at Penn State on Saturday, the Terps look to show repolished routines to elevate their score back into the 196 point range.

“Having a full week of practice we can go back to dialing the details. There really wasn’t any time to get back to neutral and build ourselves back up again [last week],” Nelligan said

Of the things to tune-up, the overall vault unit is at the top of the list — a crucial part of improving Maryland’s total score. Despite entering Toledo with vault as their highest-scoring event, it was the Terps’ lowest score on Friday.

“We weren’t as clean as we’ve been with our landings,” Nelligan said. “We’ve gotta do a better job.”

The Terps’ vault scored a season-low 48.725 points — a quarter-point less than their previous low from the season-opener.

Vault still remains Maryland’s highest-scoring event even after its performance last Friday. However, coming into the meet, the Terps had the fifteenth ranked vault average in the country, but heading into their battle with the Nittany Lions, they post the 20th-ranked average.

While vault needs improvement, if Nelligan’s floor group can just replicate its score, the Terps will be on the right track.

The floor group, which has seen the most changes to its lineup this season, has put up back-to-back showings of above 49 points.

“We’re settling into a good lineup group with the lineup we’ve shown in the last couple of weeks, and we’ve seen them grow in confidence,” Nelligan said.

The lineup used on floor in the last two meets has seen freshman Josephine Kogler sidelined due to ongoing ankle soreness. Kogler, who’s remained in the vault and beam lineups for the Terps despite injury, is still recovering from her ankle injury and her future is still up in the air.

Two-time All-Big Ten second-team selection Reese McClure remains on track to return to floor in early March, per team spokesperson. McClure has competed on beam in the Terps’ last four meets after missing the first two due to a sprained ankle in December.

Sanya Glauber is also nearing her return to Maryland’s lineup. She put up staggering numbers on bars to finish last season and holds a shared record for highest bars score in program history, scoring a 9.950 at last year’s Big Five meet.

Glauber, who has competed and exhibitioned on floor this season, is recovering from an elbow injury. She has one bars exhibition under her belt and could have another on Saturday as she nears competition.

On a more long-term note, freshman Athlyn Drage broke her foot and underwent possibly season-ending surgery, she announced via her Instagram page on Wednesday. Drage competed in all six meets on bars for the Terps this season.

Maryland’s battle with the Nittany Lions on Saturday begins at 1:30 p.m. as the Terps look to soar past their rival program and bounce back from the last meet.