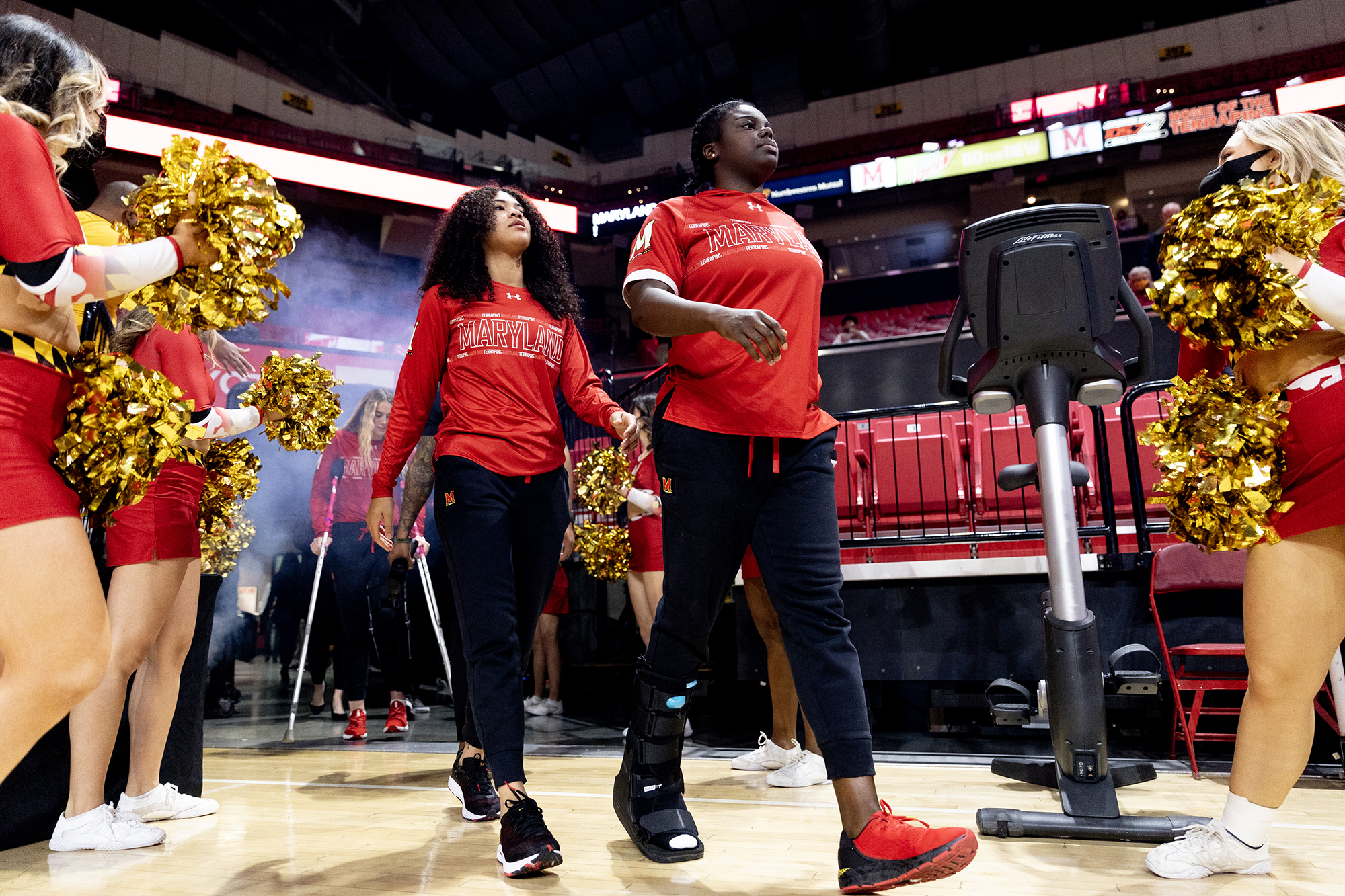 Ashley Owusu walks out to the court before Maryland women's basketball's 80-65 win over Nebraska on Feb. 6, 2022. (Julia Nikhinson/The Diamondback)

Maryland women’s basketball has walked a winding path throughout the regular season, one intentionally laden with dangerous opponents at every turn while mired with unexpected injuries.

All things considered, the Terps navigated that path pretty well. There were troublesome moments and strings of losses, but a year after sliding through a straightforward regular season, coach Brenda Frese’s squad trudged through adversity.

With one game left in the regular season against No. 5 Indiana, Maryland has a chance to finish off the regular season by winning three of its last four matchups against ranked opponents after only going 1-6 in its first seven ranked contests of the season.

“I would say that I think if you ask the team in general, across the board, it’s been a season of adversity,” Frese said.

It started with Diamond Miller, who didn’t consistently play until Dec. 21 and didn’t make her first start until the Terps’ first matchup against Penn State in January. Channise Lewis was forced to sit out the whole season due to challenges in rehab after an ACL tear over a year ago.

The adversity continued during Maryland’s trip to the Bahamas, where they took on two top-10 teams without Miller, Lewis, starting guard Katie Benzan and forward Faith Masonius, with the latter two absent due to illnesses.

The depleted Terps lost those two games by a combined 36 points.

Masonius would tear her ACL on Jan. 2. A month later, Ashley Owusu suffered a high-ankle sprain against Michigan State that sidelined her for four games. Even in her return against Michigan, she came off the bench and was visibly hampered, missing a wide-open layup late in the game.

“You can’t predict what a season is going to look like from year to year,” Frese said. “That’s why they’re so valuable to never take a day and never take a practice or game for granted.”

The constant adversity of this season has impacted Owusu the most. At the beginning of the season with Miller out, Angel Reese dealing with near-constant foul trouble and Chloe Bibby in a shooting slump, the junior guard was one of the few constants in the ever-changing lineup.

That’s taken a toll on her numbers. She’s averaging over four fewer points per game than she did a year ago and is shooting just over 40 percent from the field, largely due to a precipitous drop in her two-point field goal shooting percentage. Owusu’s also averaging two fewer assists than a year ago.

The Terps hope their break between the Indiana game and the Big Ten Tournament can give their star a chance to recover from her injury and recapture the form that made her one of the Big Ten’s best.

But before their path goes to their tournament in Indianapolis, Maryland will host Bloomington’s Hoosiers in what could be its last game of the season at Xfinity Center. The Terps will try to avoid a sweep against a team that beat them for the first time in school history earlier this year and overcome this roadblock with a victory.

“Really just excited to play Indiana — great competition, love playing in Xfinity,” Bibby said. “I’m just excited to go out there and hopefully go get the dub and play as hard as we can.”