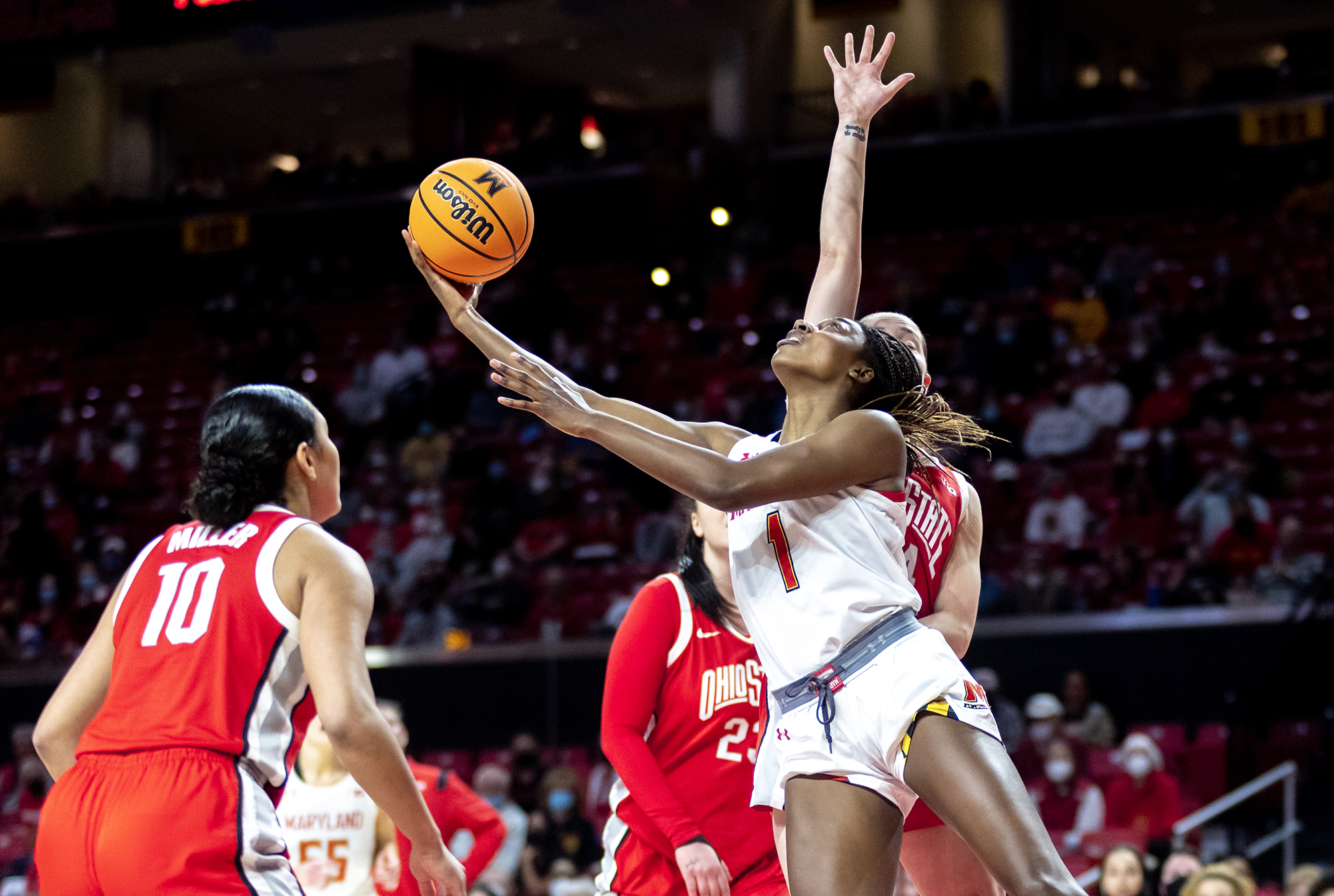 Diamond Miller outran the trap, sprinting past the two Michigan defenders who’d pressured her back near half court. She turned the corner, leaving the hapless pair behind her and sending the Wolverines’ defense scurrying.

With Katie Benzan occupying a third defender from well behind the three-point line, Miller had a four-on-two in front of her. The junior guard pressed the advantage, driving to the hoop and forcing Michigan’s Emily Kiser to shuffle over.

That rotation left markswoman Chloe Bibby, second on the team in three-point makes, wide-open in the corner. Instead of feeding the shooter, Miller tried to sidestep the defender before forcing a tough left-handed layup that went straight off the backboard into Kiser’s arms.

A team that self-admittedly is best when driving and kicking didn’t do enough of the latter in Sunday’s 71-59 loss to Michigan. Maryland women’s basketball finished with just 12 assists in the game as the Terps’ offense stagnated.

“Not just a little, a lot,” coach Brenda Frese said when asked about the tunnel vision. “They speed you up, their physicality kind of forces you into some of that … we’ve got to just be better with … understanding how to kick out and make plays for each other.”

The lack of ball movement limited Maryland to shoot just 33.3 percent from the field and 23.8 percent from deep. Few Terps shots came with space or in the rhythm of the offense, leading to clunky possessions.

The Wolverines played aggressive defense, sending two to the ball by trapping ball screens and forcing guard Shyanne Sellers and Benzan to peer over the defense to find open teammates.

“It’s just kind of difficult to see,” Sellers said. “We know the skip pass is open, but when you have two people surrounding you that are six-foot, [six-foot-three], it’s pretty tough.”

Despite Ashley Owusu’s return, the brunt of initiating the offense still fell on Sellers and Benzan, a duo that finished with five total assists.

“I thought in some areas, we got better. I thought [Benzan] and [Miller] handled more of those double teams where [Sellers] is still learning and growing through them,” Frese said. “But as a team, we still have work to improve with their length and those double teams. We got to be able to expose them more and be able to make plays for each other.”

Owusu didn’t make a field goal in her return to the court, but was tied for the team lead with three assists. Her rust clearly showed, especially late in the game when she snuck behind the defense for a wide-open fastbreak layup that would’ve cut the deficit to four but saw it roll off the right edge of the rim.

“She’s playing through some pain, doesn’t quite have the lift,” Frese said. “It was an uncharacteristic layup that she missed there, late game, that normally a healthy [Owusu] is going to make.”

A healthy Owusu, who’s still tied for the team lead in assists despite missing four games, will help the connectivity of Maryland’s offense. She’s proven to be lethal at both sides of the drive and kick game, and if she’s able to get back to her usual level of play it’d go a long way to avoiding a repeat offensive performance.

“It’s just getting her back with timing and rhythm and being able to have these games to get her ready here for postseason,” Frese said.