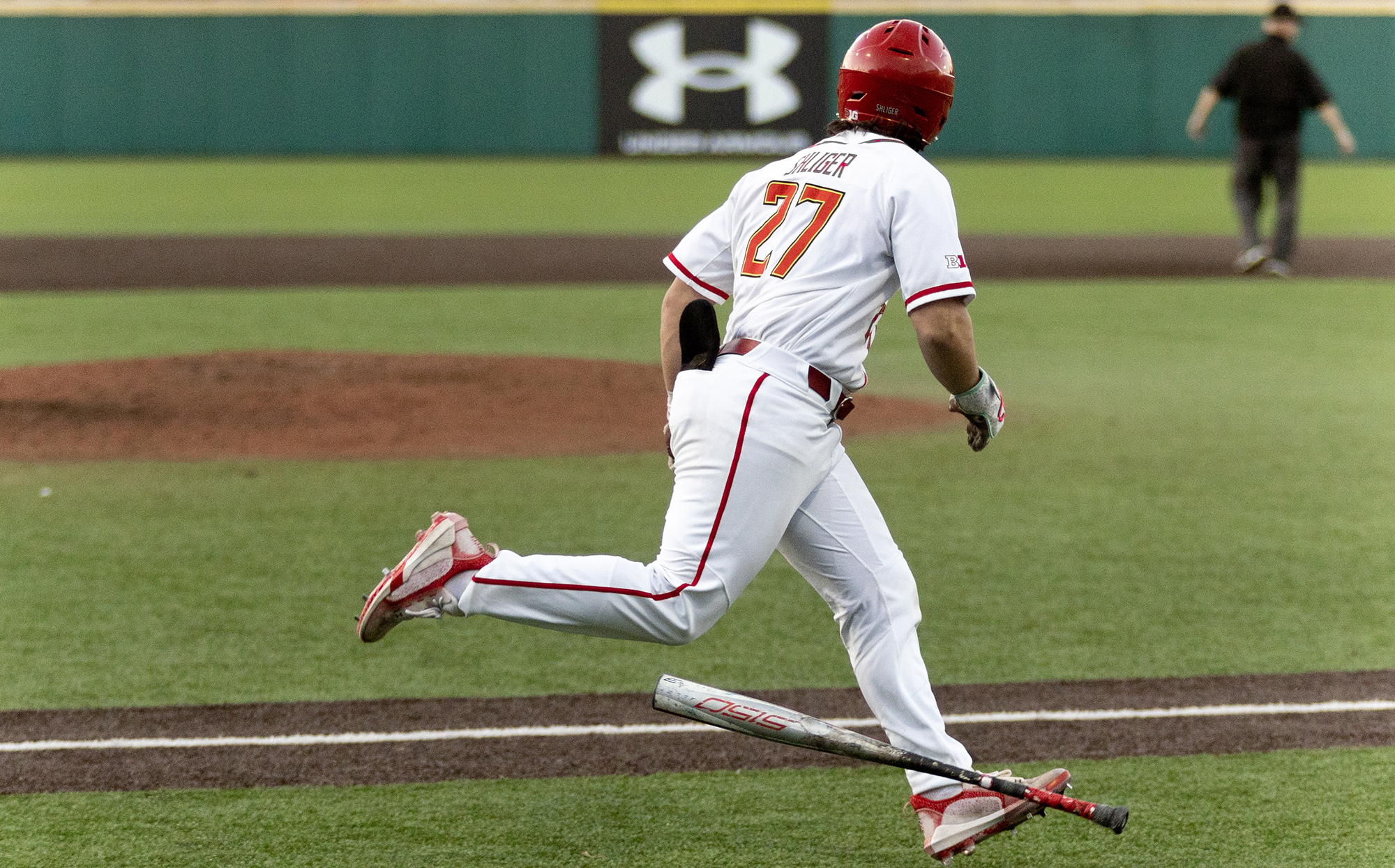 Luke Shliger runs to first base during Maryland baseball's 3-2 win over UMBC on Feb. 23, 2022. (Julia Nikhinson/TheDiamondback)

With Nick Dean doing everything but driving in runs, the Terps looked set. When he left, losing looked probable, even with a 1-0 lead most of the match. The momentum clearly fell to Campbell and it looked as if it was Maryland’s game to lose.

But Nick Lorusso wanted to be the hero again. Slashing a two-RBI single to center in the ninth inning, he helped the Terps escape a tightly contested matchup for the second straight game.

Maryland baseball now finds itself 5-0 for the first time since 1968 as the squad escaped the Camels’ grasp, 4-0.

Nothing flew well for either squad. Numerous contact opportunities amounted to little throughout the early innings as both pitchers accumulated pop-up and shallow outs. Dean and the Camels’ Thomas Harrington, who threw a one-hitter in his last outing, would duel it out.

“We knew what Harrington could do,” coach Rob Vaughn said. “There’s a reason he’s getting the attention he’s getting on the net. That’s pretty elite level stuff.”

Maryland looked to have changed little in recent momentum at the plate from their sub-par performance batting against UMBC. Dean would have to shine, once again.

“The curve ball had some swing and miss to it…had some really good hitters in two strike counts that [Dean] got on the curve ball,” Vaughn said.

Benefiting off a sole run scored by Chris Alleyne’s savvy base running in the first, Dean kept the Terps in it even as Maryland failed to reach base 15 straight times between the second and sixth innings. Wednesday’s outing against the Retrievers looked like a higher standard for the Terps at the plate.

While not the most exciting match, something always stands to be said about the building anxiety with every batter called out. Would Dean make the final mistake? Or would Harrington fall short?

Dean was first on the chopping block. With an umpire call going against Maryland on a close play at second, the Terps had to fend off the Camels with a runner on second with two outs in the sixth.

But Dean’s work didn’t change with the pressure.

Throwing a gleaming-hot inside ball, he punched out the final batter and left a crucial runner on base. Campbell continued to ride Harrington to the tune of 100-plus pitches — finally relieving him in the eighth — as the Terps looked to take advantage of a thrower who might look mortal in comparison.

“The biggest thing [for] me is getting a clear mind before I go out there and just focus on each pitch at a time,” Dean said. “When you start thinking about the whole inning that’s when you start leaving some pitches in places they shouldn’t be.”

Campbell’s Ryan Chasse picked up where Harrington left off.

[After sweeping Baylor on the road, Maryland baseball will face local foe UMBC at home]

Enforcing another 1-2-3 inning for the Camels, Chase gave way for Maryland to put their own reliever, Noah Mrotek, in.

Mrotek quickly melted under the pressure, allowing two straight runners on base as Maryland baseball collectively held its breath. Catching a runner stealing at third kept the threat at bay for the moment, however the Terps’ next reliever, Sean Heine, would load the bases.

But in the right moment, Heine found the final out.

Sending the final batter swinging at open air, Heine advanced Maryland to a crucial ninth inning. And the Terps dodged an impending first loss to the season off the back of another clutch hit from Lorusso.

“[Lorusso’s] up there and he’s buried with two strikes, he lands a curveball…doesn’t get sped up,” Vaughn said. “He’s mature and doesn’t hammer it but gets above something and gets it in play, finds a way to extend that lead.”