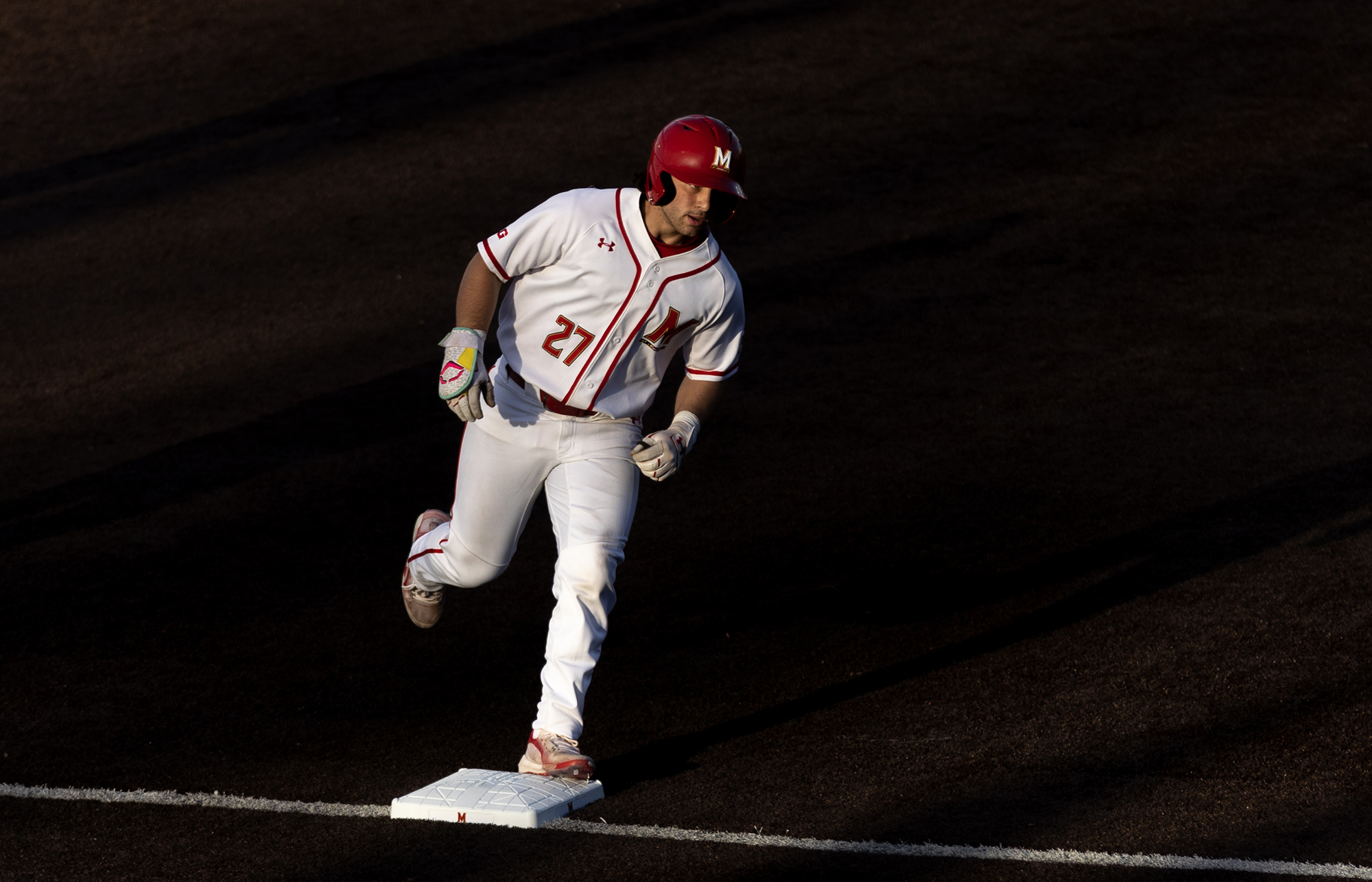 Luke Shliger runs through third base after hitting a home run during Maryland baseball's 3-2 win over UMBC on Wednesday, Feb. 23 (Julia Nikhinson/The Diamondback)

The Retrievers’ lucky day didn’t look like it was going to end.

Through almost nine frames, Maryland couldn’t find a way to land hits consistently. UMBC hung around with the 3-0 Terps. The dream stayed alive.

As Nick Lorusso took the plate in the ninth with a runner on third, he took control. Slamming a ball to dead-center with a lucky carry into open grass, he drove home the winner.

Chris Alleyne crossed home. Lorusso found himself swarmed from the dugout, and the Terps were 4-0. Saving its best for last, Maryland baseball edged the UMBC Retrievers, 3-2.

“Very fortunate to win that…wasn’t our best game in the world,” coach Rob Vaughn said. “But there’s something to be said about teams that find a way to win.”

Absent their starting three pitchers and with some injuries in the bullpen, pitcher/position player Logan Ott took the mound against the Retrievers. The crafty lefty started just one game last season — posting six innings with only one run allowed.

He’d about match that on the day. Ott pitched four innings, striking out three batters and earning a pair of runs in a solid outing.

“Very steady. That’s what [Ott] does, he throws a lot of strikes [and] he can mix looks,” Vaughn said. “I thought [Ott] gave us a phenomenal start. Anytime you go out there and give us five innings and two runs, I’m going to take that 100 times out of 100.”

Before that, Maryland would look to continue its explosive offensive start. That looked to come to fruition early, as the Terps put two runners on with little effort in the first.

It wasn’t going to be Maryland’s game too early, though — Chris Alleyne was left stranded in scoring position after Zmarzlak hit short enough to land Nick Lorusso out at second for the final out.

[After sweeping Baylor on the road, Maryland baseball will face local foe UMBC at home]

For the Terps’ bats, it didn’t look as easy as it was supposed to be.

The winless Retrievers fought. Contact remained no issue for the Terps — they racked up multiple hits throughout the first couple of innings. Balls just weren’t landing well enough at times to get runners on-base or advance players in position.

“We just missed underneath the baseball, a lot of lazy fly balls today,” Vaughn said. “…Not enough strung together and that’s a credit to their [pitching] staff.”

If it weren’t for a booming hit over the centerfield wall in the third by Luke Shliger, Maryland would be looking at a home opener laden with missed opportunities and disappointing bounces. Alleyne would find home plate the same inning to give the Terps a 2-0 lead.

Tiring and faltering, Ott found himself relieved in the inning as he spotted the Retrievers a score and a pair of runners in the frame. Ryan Van Buren wouldn’t be able to clean up Ott’s mess, as the reliever allowed the tying run before ending the inning.

The bottom of the inning would prove fruitless for the Terps as Max Costes stepped up to the plate with a runner on and two outs. A new pitcher for his at-bat sparked even more hope.

But Costes caught an unlucky break. Swinging, the senior fouled a ball off his lower half, crumbling him to the ground. Eventually getting up to finish his at-bat valiantly, Costes slugged a ball into right field that landed in an outfielder’s glove to end the fifth.

“I think we started off a little slow with the bats, but I think at the end we had that feeling that we knew we were gonna win,” Alleyne said.

Thankfully for Maryland, its pitching rotation did its job well enough.

Sean Heine would take over for two-thirds of an inning and Will Glock did enough for two and a third innings as the Terps kept it tight with UMBC.

Bad luck continued to strike Maryland as Shliger stood in the box in the eighth with two outs, and Costes on third. Needing the tying run, Shliger made contact.

The ball drifted straight to a Retriever, ending the frame and sending the game to a ninth inning deadlock.

Glock and reliever Noah Mrotek did their jobs in the top of the ninth, combining for two strikeouts to give the Terps the chance to put the game away in the bottom of the inning.

And after an Alleyne double followed by a sacrifice fly put Maryland on the brink of its fourth straight victory, Lorusso sealed the deal.

“It was just a matter of time before things started clicking,” Alleyne said. “Thankfully it came together in the last inning.”