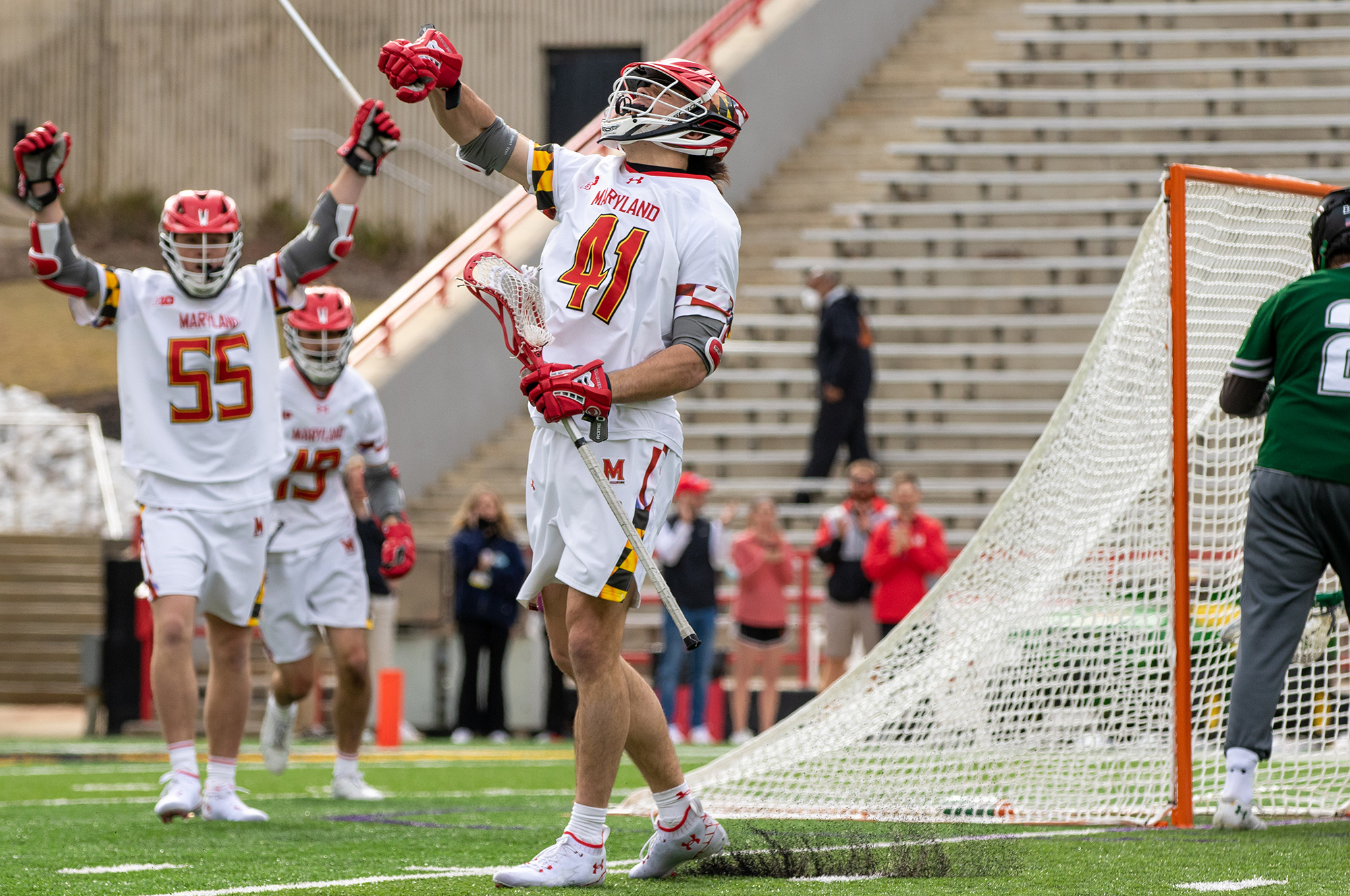 Jack Brennan pumps his fist after scoring during Maryland men's lacrosse's 20-8 win over No. 8 Loyola on Feb. 12, 2022. (Cam Andrews/The Diamondback)

Despite holding a 5-0 lead early in the second quarter, two Lucas Quinn goals with under 35 seconds left in the half capped off a 6-2 run that whittled Maryland men’s lacrosse’s lead down to only one at halftime.

Maryland shut out Syracuse’s offense for the first 14 minutes of the third quarter and restored a three goal lead, but the Orange once again struck twice in the final 35 seconds to make it a one goal game heading into the final 15 minutes.

But when it mattered most, the Terps’ offense found its groove, beginning the fourth quarter with a 3-0 run.

Syracuse found its way forward later in the quarter, but Maryland’s defense withstood multiple long possessions from the Orange’s attack.

The 5-2 fourth-quarter run was enough for the Terps to pull away in its first road test of the season, topping No. 9 Syracuse, 14-10, on Sunday.

“Coming to Syracuse and getting the win is never easy,” coach John Tillman said. “First time on the road for us, so we knew we’d have our hands full and it was kind of as advertised.”

The victory was a true show of grit from the Terps, as Syracuse looked to prove itself in its first true test of the Gary Gait era, after defeating Holy Cross 28-5 in its opening game the week prior.

Even though the Terps were able to pick up the big road win, Maryland lost a majority of faceoffs, committed more turnovers, and picked up the same amount of ground balls throughout the match.

However, in the fourth quarter, Maryland won the faceoff battle 5-3 and scooped up 10 more ground balls than Syracuse, notching just under half of the Terps’ total for the game in the final 15 minutes.

Maryland’s determination shined through in the fourth quarter as it beat its second straight top-10 opponent, this time in a much more intense battle.

“Everything was contested, every ground ball, every face off,” Tillman said. “Every possession just felt like both teams were going at it. And that’s where win or lose, you know you’re going to get better.”

[Maryland men’s lacrosse faces first road challenge of the season in No. 9 Syracuse]

Logan Wisnauskas and Jonathan Donville were focal points of Maryland’s attack once again, notching four and three goals respectively. However, the Terps ended the game with a variety of goalscorers, totaling eight different players.

None were more unlikely than defensive midfielder Roman Puglise, who had scored only 14 goals in 59 games before Sunday.

But when Keegan Khan found a trailing Puglise in transition, the defensive midfielder made no mistake, ripping a shot from about 15 yards out into the top corner.

The goal was representative of a complete performance from the Terps, who always had someone step up even when Syracuse seemed to be storming back.

“You look at our team and there’s pieces everywhere,” Puglise said. “We work on things every single day to try to play positionless lacrosse, and that bleeds into our defensive guys. It doesn’t really matter the opportunity, you got to take advantage of it.”

Maryland now stands alone at the No. 1 position in both the latest Inside Lacrosse media poll and USILA coaches poll after Sunday’s win.