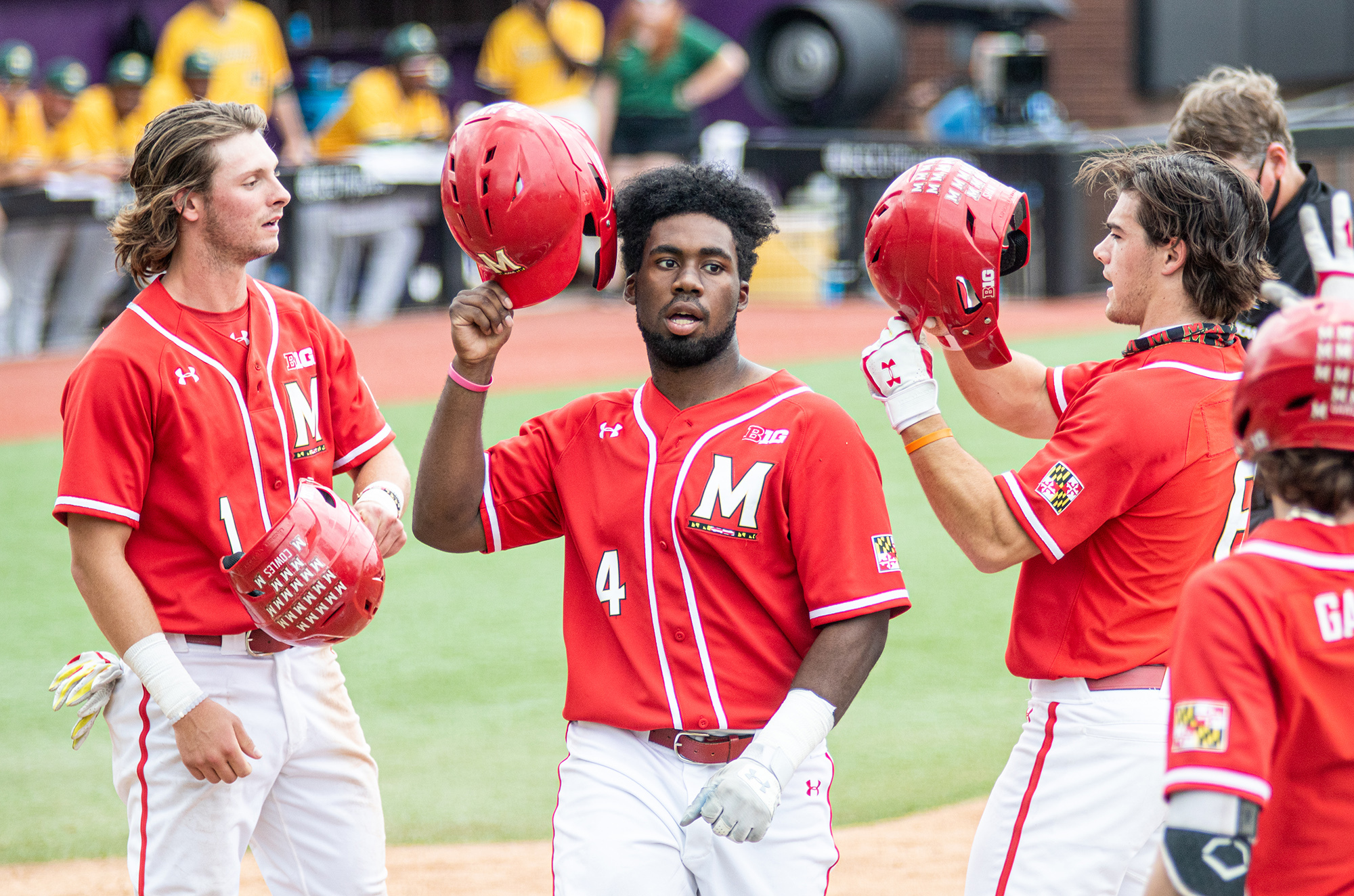 Max Costes raises his helmet after scoring during Maryland baseball's 16-0 win over Norfolk State in the NCAA Greenville Regional on June 5, 2021. (Julia Nikhinson/TheDiamondback)

Max Costes batted ice cold to start the weekend against Baylor. One bat-flip, then another, and he flipped the script in a flash.

Powered by homers from Costes and Matt Shaw, Maryland baseball cruised to another powerful offensive win and an opening-weekend sweep of the Bears, 8-4.

“Story of the weekend is pitching and defense,” coach Rob Vaughn said. “Obviously we had some homers and played pretty good offense but it’s elite level starting pitching this weekend… elite level defense.”

This one appeared different from the rest right as it dawned.

The top of Maryland’s lineup found itself quickly stifled by Baylor’s right-hander in Jake Jackson — not helped by an early hit-by-pitch rule that favored the Bears — and uncharacteristically off to a cold start.

Baylor couldn’t quite say the same.

[Offense explodes for Maryland baseball in second win against Baylor, 9-5]

A pair of hits off Jason Savacool to start had Bears on second and third with Baylor primed to jump to a decisive early lead. Savacool came back to earth just as a wild pitch landed the Bears their first lead of the game, before he struck out the final batter to keep it inconclusive.

“I feel good,” Savacool said. “I got a couple of things to clean up before my next start but to be able to go out there and get ourselves some whacks out of the start was huge.”

Costes didn’t look to play the role of game-changer based on the weekend he had so far. But things went differently Sunday.

Cranking one right onto a neighboring soccer field, Costes bat flipped and trotted around the bases to tie up Baylor. A subsequent double by Troy Schreffler set up a Bear error on an overthrow to first that scored him.

“I know what I can do. I got pitches to hit and I didn’t miss them,” Costes said.

Baylor quickly tied it up in the next inning before both teams stalled as the fifth started. And then Maryland came alive yet again. Courtesy of another bomb, this one by Shaw, that elevated the Terps to a 4-2 lead.

Baylor would chip that one down with some steady hits that brought one runner home in the bottom of the frame..

The contest remained close after Maryland cushioned their lead with a hard-hit single to center by Schreffler in the sixth until Shaw would have his day again.

All bat-flips and smiles for Maryland baseball’s series finale against the Bears.

“It’s very easy to hit when you have guys ahead of you, guys behind you like we did,” Costes said. “We have an incredibly complete lineup.”

Third-baseman Nick Lorusso closed out the ninth for the Terps and — despite some theatrics that added one more run for the Bears — the position player sealed the win off a line-out and the away series sweep of Baylor.

“We haven’t done anything yet,” Vaughn said. “We didn’t win the Big Ten this weekend, we didn’t get in the NCAA tournament this weekend…This is just the first step of these guys’ journey.”