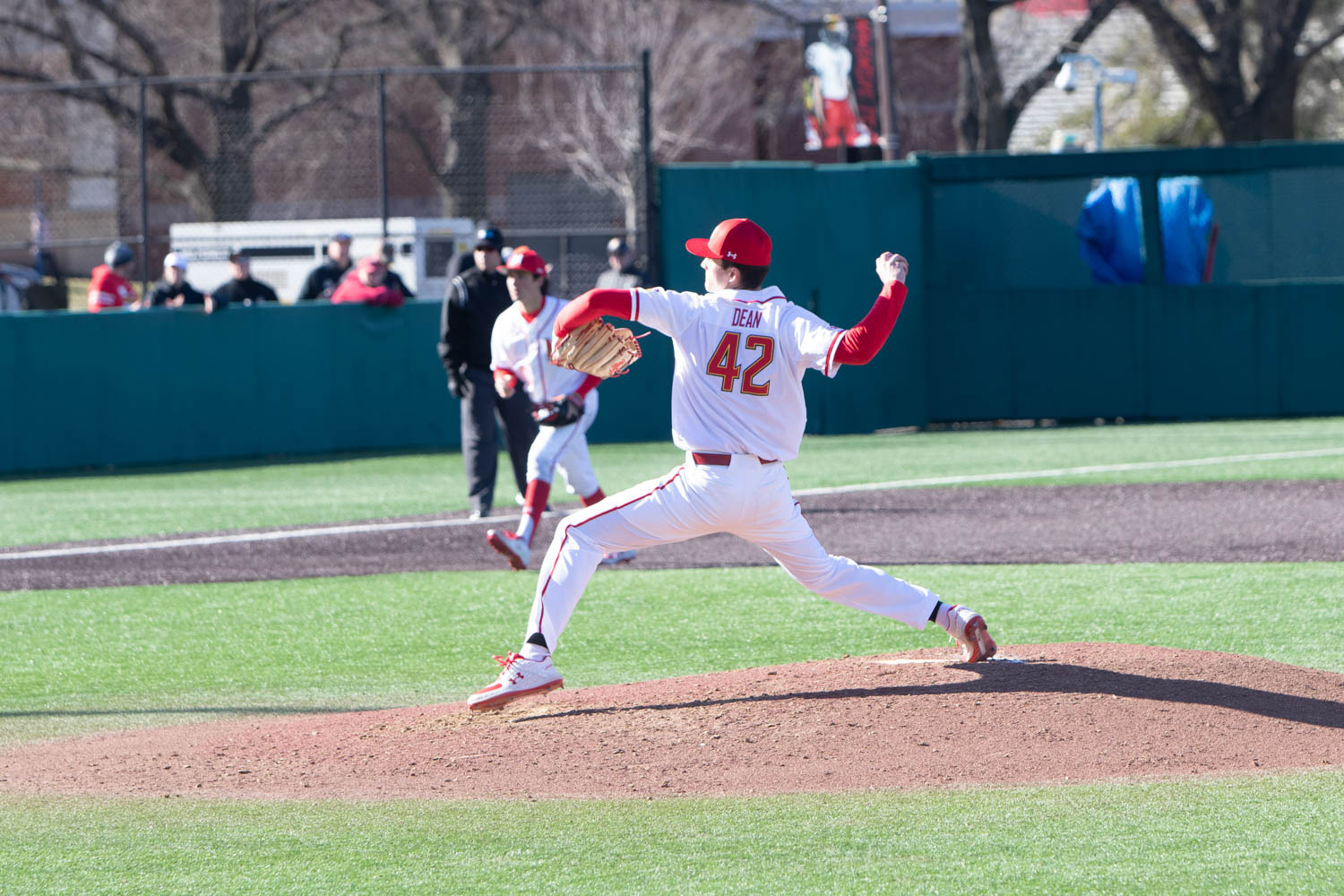 Crowd noise, the familiar thump of a baseball slamming into a glove and fielders shifting position christened the night. Maryland pitcher Nick Dean and Baylor pitcher Tyler Thomas made sure there wasn’t much else to hear.

Skillfully, each pitcher kept up their end of the bargain when called upon. As the night wore on, no clear winner stood out. Dean survived, and Thomas couldn’t recover from an early-inning onslaught by the Terps.

After Maryland’s offense capitalized early, Dean threw the Terps to their first victory of the season against the Baylor Bears, 4-0.

“The story of the game is Nick Dean,” coach Rob Vaughn said. “I mean, good gracious, what an outstanding start.”

The night couldn’t have started better for the Terps in the deep south.

A fast double to left field by Luke Shliger gave Maryland an early advantage on the bases against Baylor’s ace pitcher, Tyler Thomas. Chris Alleyne quickly capitalized, whacking a long ball off the wall in center and scampering all the way to third as Schliger scored.

After a Matt Shaw groundout, Alleyne easily reached home from a Nick Lorusso grounder to shortstop. A 2-0 lead against one of the better baseball teams in the Big 12 after the first inning amounted to plenty of hope for a dominant offensive outing for the Terps.

Thankfully for Maryland, Dean stayed and performed at the mound.

Throttling the Bears’ batting lineup, Dean kept the Terps in front against a powerful Baylor team headlined by Jared McKenzie. As long as he made it hard for McKenzie, he looked as if the rest of the Bears’ lineup didn’t give him too much trouble.

“I feel awesome. It’s definitely a huge confidence builder,” Dean said. “I hadn’t been on the mound in quite a while but coming back and having that type out outing…I credit a lot of it to Shliger and [Pitching Coach Mike] Morrison for calling a great game.”

Thomas impressed in his own right. Again and again, he effortlessly retired Maryland’s lineup at the plate. Thomas would go on to strike out nine Terps in six frames as he dueled it out with Dean.

In the fourth inning, McKenzie surely made Dean sweat. Bringing his usual imposing figure, he slammed a ball to left that hit high on the wall and threatened to go over. It didn’t, but he landed on second where he would stay for the inning as Dean picked up where he left off.

Neither team would threaten after the first inning until Maryland managed to get runners on first and third with one out in the sixth. Presented with the important opportunity, it seemed as if the Terps may finally cushion their lead.

A pop-up by Bobby Zmarzlak and a fly-out from Max Costes ended the chance silently. Maryland would have to cling to its pair of runs tightly.

“Wasn’t the prettiest things at times offensively but had some really good moments that we capitalized on,” Vaughn said.

But from there, Baylor made it easier for the Terps at the plate. Rotating Thomas out for Anderson Needham, the strategy worked flawlessly through his sole inning of work, retiring three Maryland batters easily.

But as the next inning dawned, Needham — who had thrown with velocity as he retired batters in order — was gone. Instead, Grant Golomb had taken his place.

Golomb didn’t have the same luck. Shliger imposed his will on the bases after a leadoff walk and stole third after another walk, this time by Shaw. Shliger’s next move was brave, to say the least.

Taking off as the ball slipped away from Baylor’s catcher narrowly, it looked as if Shliger may have been too brazen. With a little luck, he got away with it.

“Once I saw it bounced, I took off and let it go where it was gonna go, but I was confident in myself,” Shliger said.

Diving for home plate, the Bears’ catcher couldn’t fully gather the ball as he tagged Shliger and the runner was called safe at the plate. Shaw would add a fourth run for the Terps as he capitalized on a Lorusso single.

Remarkably, Baylor couldn’t put together a comeback. Noah Mrotek took over Dean and labored through the inning, doing just enough to escape cleanly.

Mrotek didn’t disappoint the rest of the way. Retiring the Bears lineup in order, the freshman finished off Maryland’s first victory of the season.