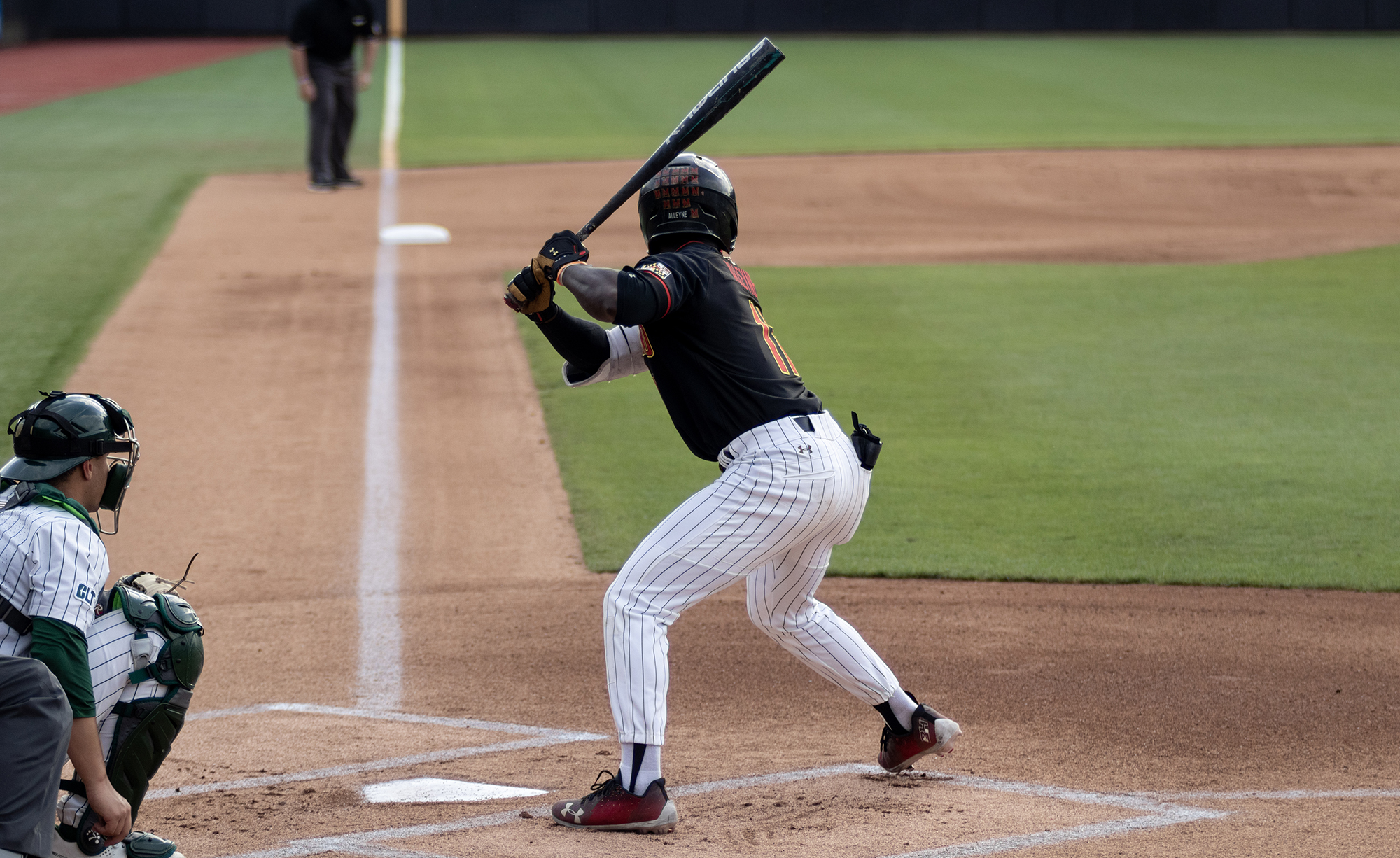 All Chris Alleyne needed was a phone call to come back home.

Fresh off the heartbreak of silence during the 2021 MLB Draft, Alleyne picked up the phone. A familiar voice graced the other side of the line: Maryland baseball coach Rob Vaughn.

He told Alleyne if he wanted to sign a MLB free agent contract, he could. But he’d always have a spot in the Terps’ lineup if he chose to come back for one more year.

Alleyne made up his mind.

The outfielder had unfinished business after taking a foul ball off his eye in the opening at-bat of the NCAA Greenville Regional. That left the Terps without one of their best players for the entirety of that tournament.

“I still haven’t really played any regional baseball yet in my career, so obviously that’s always a goal of mine and goal of the team so I’m really excited to get back there,” Alleyne said.

He’ll be on his way back to College Park to spearhead a batting lineup sans-home-run leader Benjamin Cowles. Alleyne will be a stunningly crucial part of what’s expected to be an explosive lineup at the plate with Max Costes, Matt Shaw and Bobby Zmarzlak returning as well.

“I don’t know if there’s a better center fielder in college baseball,” Vaughn said of Alleyne. “He can really throw. He’s fearless, which I think is the biggest trait of a centerfielder.”

Transfers, Nick Lorusso and Drew Grace from Villanova and Kentucky, respectively, are both expected to contribute to Maryland’s batting lineup and infield. Lorusso has especially high expectations having hit career numbers of .294/.392/.391 over 88 games at Villanova. The two will hope to fill the void of Cowles and the graduated Randy Bednar.

Another departed Terp made a surprising lateral move. Tommy Gardiner, who was a routine starter and a solid batter in the lineup last season, joined Maryland baseball’s staff as Director of Player Development.

Among other coaching staff moves, Maryland hired former Coastal Carolina pitcher Mike Morrison as their new pitching coach after Corey Muscara left to coach at Wake Forest. Morrison won a national championship with the Chanticleers in 2016 and then left for a multi-year stint in the White Sox organization.

“Our guys have responded really, really well to him,” Vaughn said. “He’s got a great personality. His ability to help develop guys has been really good.”

Morrison will have the important job of teaching one of the better pitching rotations the Terps have had. Nick Dean, Ryan Ramsey and Jason Savacool are expected to be routine starters this season.

Each one has impressed in their own right.

Dean maintained a 2.87 ERA last season, until he got hurt before Maryland could trot him out in last year’s regionals. Ramsey, viewed as a steady and reliable closer last season until a breakout game saw him limit the Charlotte 49ers to three hits, days after they pummeled the Terps at the plate.

And Savacool, a freshman last season, led Maryland’s pitching staff in wins but struggled in its first regional game against Charlotte. But he seems to be building up some buzz — his teammates and coaches laud him for his fastball.

“He’s been really consistent this whole fall and into the preseason,” Vaughn said. “He’s gonna be a pretty good one. I’m glad I at least get one more year with him after this year.”

Fellow pitcher Sean Heine had no issues praising the sophomore right-hander either.

“He’s going to be one of the guys this year who’s really going to carry us to another regional and he’s gonna be our guy,” Heine said.

Vaughn said Savacool’s body changed in the offseason as he got stronger and has been throwing between 92 and 94 MPH.

University of Rhode Island transfer Nick Robinson is also expected to contribute to Maryland’s bullpen with a 5.3 career ERA.

And if all the aforementioned turnover wasn’t enough, Maryland also received a new clubhouse shortly before the season.

Today is a special day for Maryland Baseball.

We unveiled the Eric Milton Clubhouse, the new home of the #DirtyTerps! pic.twitter.com/cJZ0ek0tUE

The Terps are slated to face a myriad of difficult nonconference opponents for the first time since before the pandemic. That slate will kick off with Baylor on Friday.

The Bears went 31-20 last season with a host of pitchers sporting sub-four ERAs. 2022 preseason D1 Baseball Second-Team All-American Jared McKenzie slugged 44 RBIs and 10 homers across last season. This opening series will provide a heavier-than-usual measure on how Maryland baseball will compete this year.

Ultimately, playing their best will be key.