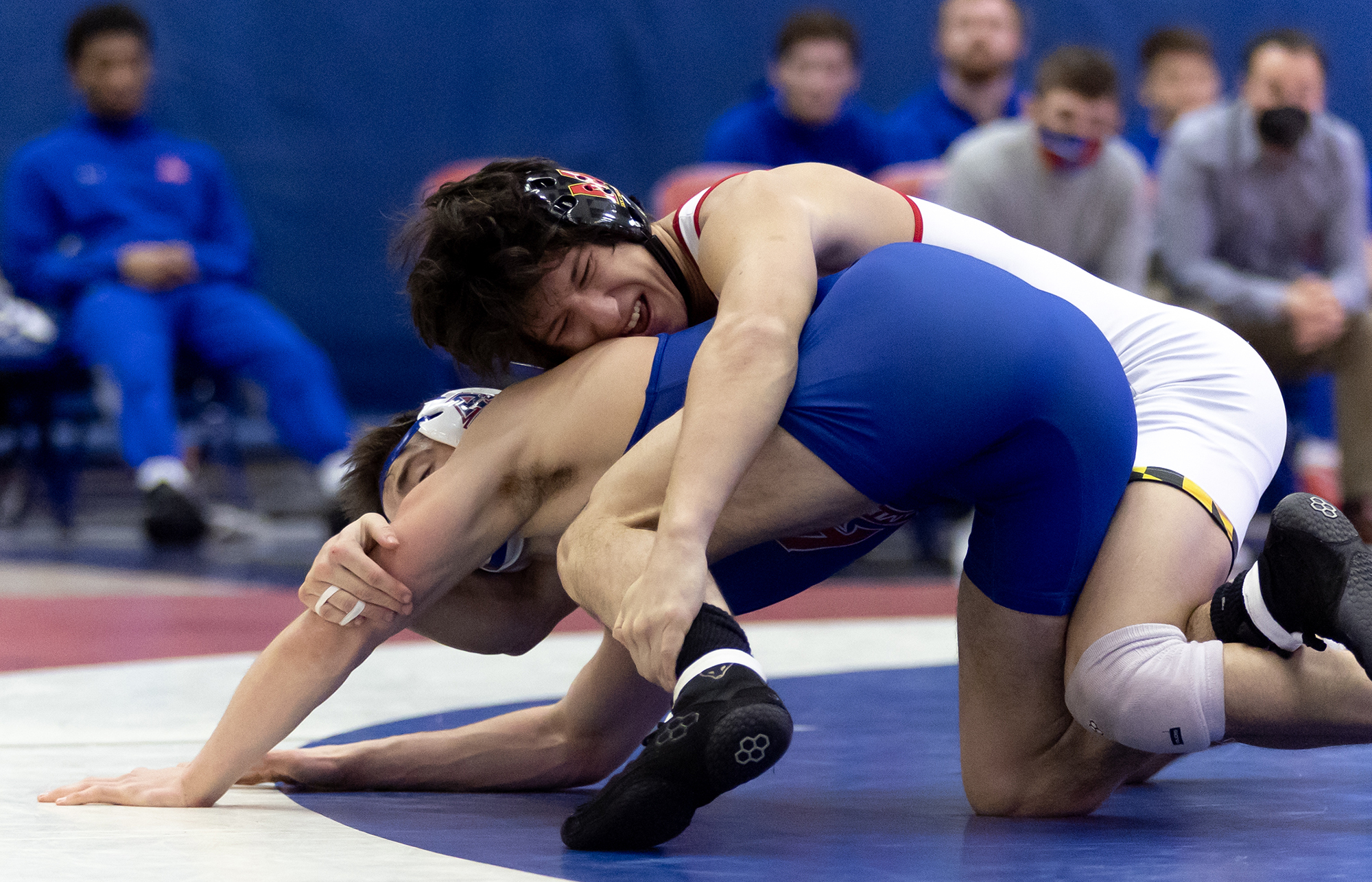 Danny Bertoni tries to take down his opponent during Maryland wrestling's 31-12 win over American on Feb. 19, 2022. (Julia Nikhinson/TheDiamondback)

WASHINGTON, D.C. — Down 9-0 after two bouts, things could have gone south for Maryland wrestling a mere day after an emotional senior-night win.

But 18 unanswered points from the middle of the lineup and a dominant display from their two ranked wrestlers lead the Terps to a 31-12 win over American in their final preparation before the Big Ten tournament.

“A couple weight classes wrestled as well as they could,” coach Alex Clemsen said.

Danny Bertoni started Maryland’s resurgence, spinning Ethan Szerencsits for an early takedown, while also acquiring eight near fall points in the first period. In the second period Bertoni kept racking up the near falls, getting four more and one final takedown in the third period to clinch a 16-0 tech fall for that cut the deficit to 9-5.

Michael North built off of Bertoni’s momentum with a dominant offensive display behind a handful of takedowns for a 9-3 decision win. North rebounded from his loss Friday night, but he was unable to get a late takedown for a major decision win. Either way, thanks to Bertoni and North a 9-0 deficit turned to a tight contest, 9-8.

Lucas Cordio got an early takedown in the first 10 seconds of his bout and kept pressing Antonio Segura with another takedown to take a 5-1 lead into the second period.

Cordio got his third takedown, locking Segura in a cradle, before turning him onto his back to finish off the fall. His strong performance gave Maryland its first lead of the night, 14-9.

“I was just really happy to get an opportunity… to compete and go out there and just scoring points and helping my team how I can,” Cordio said.

From there, Gaven Bell took an early 2-0 advantage in the first period on a takedown against Cole Painter. In the third period, Bell got a reversal then turned Painter onto his back, accruing four near fall points to — using riding time — find a 9-0 major decision win.

It was Bell’s second dual win of the season and pushed the Terps’ streak to 18 unanswered points.

“For us to kind of stop that bleeding and then just take off and go. It’s just a sign that the guys in our program are really good,” Cordio said.

In his final warmup before the Big Ten tournament, No. 10 Kyle Cochran got a takedown and a two-point near fall on Colin Shannon, taking an early 4-0 lead.

After a brief injury stoppage, Cochran went back on the attack with another takedown and six near-fall points. One last four-point near fall gave Cochran a tech fall victory finishing off the regular season in style with a 2-0 weekend.

No. 29 Jaron Smith, in his final preparation before postseason play, got a speedy fall win over Mervin Mancia in just under two minutes.

Zach Schrader and Isaac Righter went to sudden victory tied at one. But in a scramble with the Maryland bench up on their feet, Schrader finished off a takedown to win, 3-1, and go 2-0 on the weekend.

“[Schrader] stayed composed, stayed engaged, wrestled really smart and then had an opportunity and made it happen,” Clemsen said. “I was really happy for him.”

There were some losses on the evening for two Terps looking to make a potential push in the postseason.

King Sandoval, building off of his momentum from Friday, earned an early takedown on Jack Maida in the first period to take an early 2-0 edge.

In control for most of the bout in the third period, Sandoval started in the top position and Maida quickly escaped to cut into his lead. Maida would spin Sandoval around for a takedown, pushing ahead, 4-3. Maida would then ride out Sandoval for the rest of the period for a victory.

The loss meant, going into the postseason, Sandoval still stands at 13 falls leading the Schalles Award race by one over Air Force’s Wyatt Hendrickson.

At 174, Dominic Solis and Tim Fitzpatrick were evenly matched for their entire bout before Fitzpatrick won a scramble, spinning Solis for a takedown late in the third period.

The 3-2 decision win briefly put a halt to Maryland’s momentum at the time. After winning three in a row, Solis went 0-2 on the weekend in his last preparation for the conference tournament.

“We got to get Solis going again,” Clemsen said. “He seems to be in a little rut. I know he’ll work himself out of it.”

However, by the end of the night, the team score read in favor of the Terps. And that’s all that matters for Maryland. Ending the regular season with a successful 2-0 weekend, the Terps built momentum to the Big Ten tournament in Lincoln, Nebraska in two weeks.

“It was nice to see some guys have an opportunity to get to some positions and score some points and get their hand raised,” Clemsen said.