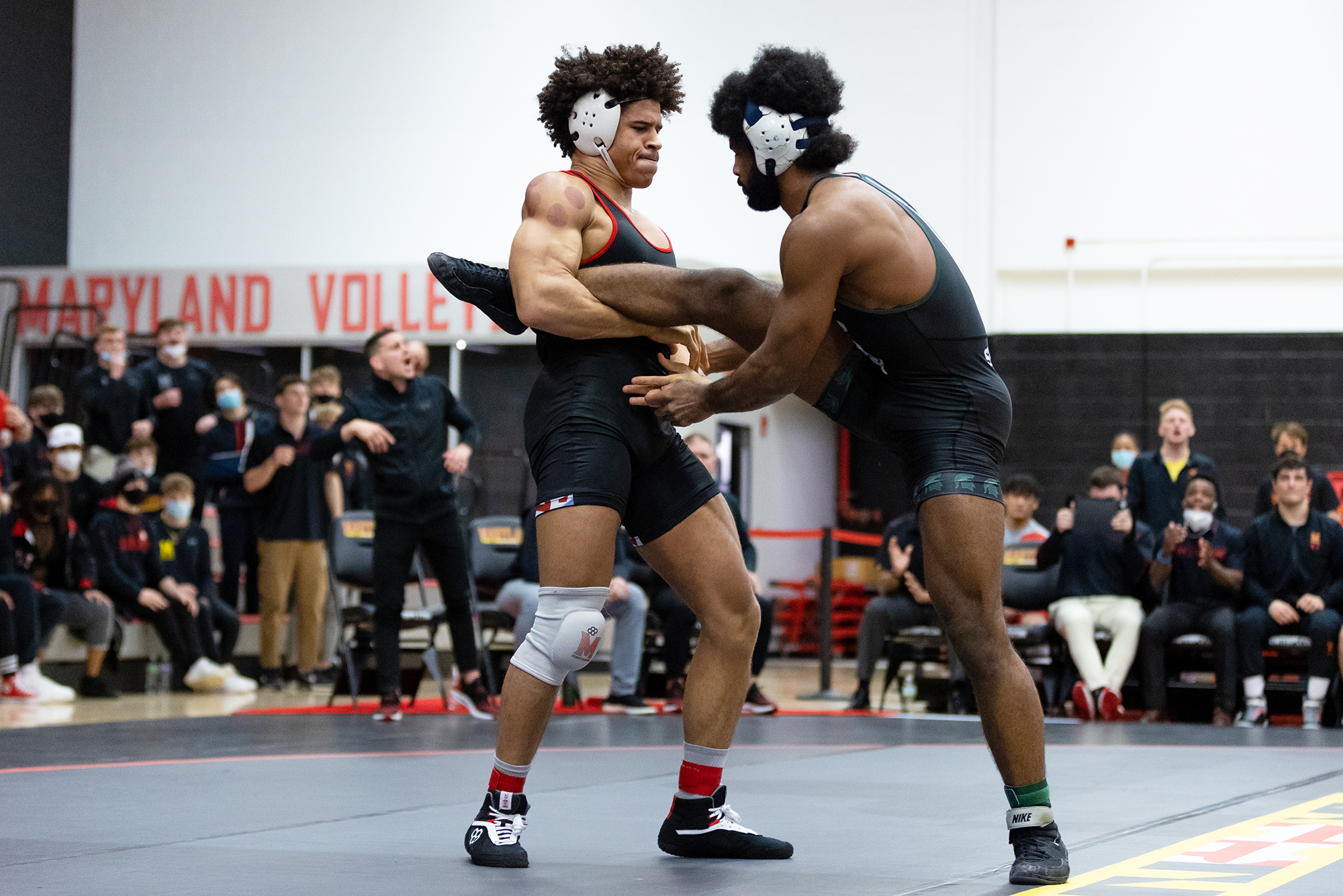 Jaron Smith holds up the leg of an opponent during Maryland wrestling's 29-6 loss to Michigan State on Friday, Feb. 4, 2022. (Cam Andrews/ The Diamondback)

Those five athletes have been a crucial part of the Maryland wrestling program on and off the mat, and the emotions will be high as they will be honored for their contributions to the program on senior night.

The class has been through its share of obstacles — a coaching change and a COVID-19 pandemic that shortened the 2020-21 season.

But Sandoval, Bertoni, Smith and Cochran didn’t leave the program when coach Alex Clemsen took over — they chose to stay and bought into Clemsen’s plan for the future.

Sandoval, a Maryland native, has been a standout at 133 this season with a 14-12 record. He leads the NCAA in falls with 12 and looks to join an elite list and win the Schalles Award — an award given out to the wrestler with the most falls in the NCAA.

“[Sandoval is] a kid that doesn’t let you in really easy. He’s pretty quiet. He’s pretty soft spoken, but he’s a good kid. He’s bright and he’s creative and you see that in his wrestling at times,” Clemsen. “I know that he’s got a really bright future ahead of him.”

Sandoval will be moving on after the season is over to pursue a career in architecture.

Despite a recent slump, Bertoni was a key factor in the early-season success for the Terps at 141 with wins against Drexel, Duke and Navy. He helped set up three comeback wins for Maryland.

[Maryland wrestling went another year without a Big Ten win. Next year could be different.]

Bertoni is also one of the more competitive kids in the Maryland wrestling room. Like Sandoval, Bertoni will be leaving College Park for the next stage of his life.

“I’m glad he stayed … I’m glad that I got the opportunity to coach him,” Clemsen said. “He’s got a competitive core, and because of that he’s gonna have a lot of success when he leaves us and ventures out on his next endeavor as well.”

Schrader, a transfer from California Baptist, made an impact right away as a Terp.

Schrader got his 2021-22 season off to a great start going, 5-0 and winning the 2021 Clarion Open. Schrader closed out three comeback wins for Maryland in December and was ranked by InterMat for most of the season.

Despite his nine-dual losing streak, Clemsen described Schrader as “cool as a cucumber” for the way he’s handled the slump as a veteran wrestler. And thanks to Schrader’s early season success, he’s still in a position to potentially make the NCAA Championship by committee.

Despite only being at Maryland for one season, Schrader was a big addition to the program for the younger wrestlers in the room behind him at heavyweight.

“We really needed a heavyweight,” Clemsen said. “I think it was good for our young heavyweights in the room to see a guy that’s really mature and [handles] his business and [trains] hard every day and [is] really consistent in his development.”

For Smith, a seven-year member of the program, it’s been a battle of adversity getting to this point thanks to a bevy of injuries.

This year was a successful one for him at 197, being ranked 29th in the latest InterMat ranking. Smith is in a good position for the Big Ten tournament and to make the NCAA Championship for the first time in his career.

“To see him continue to battle back from injuries and give himself opportunities and for him, not to give up and not to lose sight of what his goals are … he’s been great for our program,” Clemsen said.

Cochran, described by Clemsen as the “poster boy” of the program, is towards the end of his breakout season that features a Southern Scuffle championship and being 10th the latest InterMat rankings at 184.

Cochran had a slow start to his collegiate career, but he made the adjustment and it has paid off this season with the chance at postseason glory in March.

Like Smith, Cochran has one year of eligibility left if he chooses to use it. But Clemsen won’t forget his impact as a wrestler and captain to the program.

“I can’t say enough about him,” Clemsen said. “I really enjoyed Kyle Cochran as an athlete and as a person.”

As Maryland continues its rebuild and with the future bright for next year, this class helped them take another step.

This class’ impact on the program and its younger wrestlers haven’t gone unnoticed to captain Dominic Solis.

“It’s been amazing that our seniors have been able to actually have set that foundation for our young guys,” Solis said.

With Maryland currently on a nine-dual losing streak and hoping to build momentum toward the Big Ten tournament, Friday night will be an emotional night especially after not having a senior night last season due to COVID-19.

A win by the end of the night against Columbia will send this class off in style.

“You want to go out with a bang in your own gym,” Clemsen said. “I want that for these five guys and their families.”