Maryland wrestling went another year without a Big Ten win. Next year could be different. 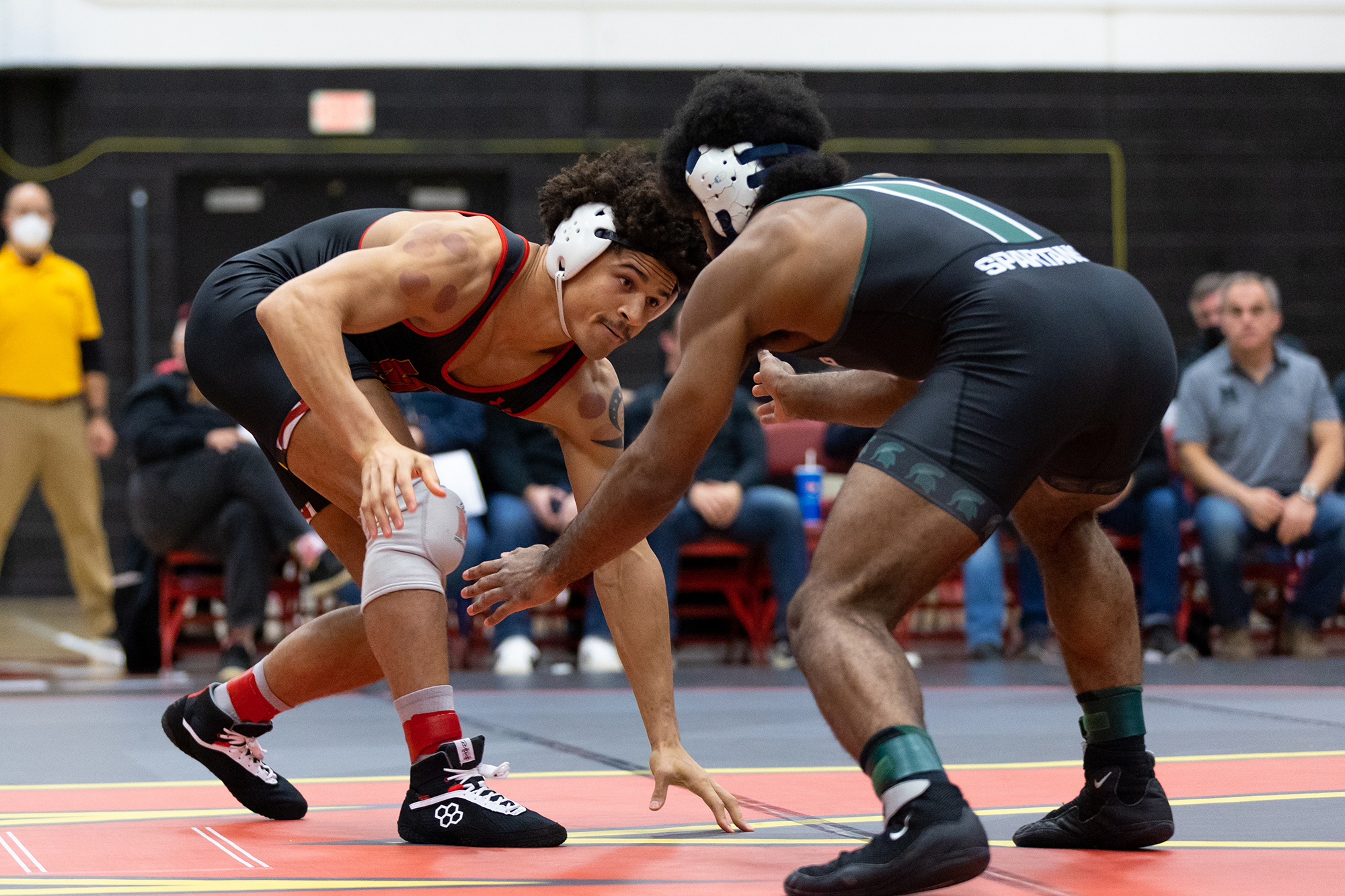 The Big Ten is one of the best and deepest conferences — 10 teams in the conference were ranked, and Maryland wrestling faced six of them this season.

The conference is also full of talented wrestlers up and down the standings who have achieved individual accolades such as All-Americans, NCAA Championships and even success overseas.

Once an ACC powerhouse, the Terps have picked up just one conference win since they joined the Big Ten in the 2014-15 season. That win came in 2016 against Michigan State.

Snapping that losing streak would have been a tall task for this year’s rebuilding Maryland program.

After a 31-13 loss to No. 15 Rutgers, the team clinched another winless conference slate and another last-place finish for the Terps in year three of coach Alex Clemsen’s tenure.

“We’re just not there yet,” Clemsen said. “We’re getting exposed a little bit against some better programs … it is what it is.”

Going into the dual against then-No. 2 Penn State back in January, Maryland was riding high and feeling confident.

But a 46-0 loss to the Nittany Lions dashed the Terps’ hopes of an upset and held them in the basement of the conference.

Then, the Terps had their best chance to pick up an elusive win against an Indiana team that also ranks towards the bottom of the Big Ten.

Despite good performances from King Sandoval, Dominic Solis and Kyle Cochran in the dual, not having Danny Bertoni or Jaron Smith available due to health and safety protocols hurt Maryland’s chances to pull away a win in a 26-12 loss.

As the schedule got more difficult, the Terps’ results mirrored their troubles.

Maryland then began a three-dual homestand hoping they could pick up a win in front of the Xfinity Pavilion faithful. That wasn’t the case — the Terps lost against a then-No. 10 Wisconsin team, managing just one win from Michael North in the 39-4 loss.

Despite Smith’s top 10 upset win over Patrick Brucki, Maryland was no match for a deep then-No. 4 Michigan team in a 40-2 loss.

The dual against then-No. 17 Michigan State was full of missed opportunities scoring-wise. Maryland had chances in five bouts to put points on the board and put more pressure on the Spartans.

But at the end of the night, the score read 29-6 in favor of the Spartans. In their homestand, the Terps were outscored, 108-12.

Against Northwestern, Maryland was lackluster from the bottom position in the first half of the dual and found itself in a 21-0 hole after the 165 bout.

Despite good performances from its duo of Solis and Cochran at 174 and 184, the Terps lost 29-7 to the Wildcats.

“There’s things that we can improve on, and I think that this program is just continuously building up from what we were,” Cochran said. “There’s some matches that could have been a little different, but everyone’s improving. So that’s all that matters.”

In total, Maryland was outscored 279-48 in conference play. Compared to last season — where the Terps were shut out five times — they’ve improved, being able to salvage some wins in these blowout losses.

Even with good individual wins and performances, it’s still a team loss. And Clemsen does not believe in moral victories.

With two duals left against Columbia and American with the Big Ten tournament and NCAA championship on the horizon, the Terps will have to wait another year to snap their conference dual-winning drought.

But there is a sense of hope for next season.

In the trip to Rutgers, Maryland brought every member of its 2021 class — ranked eighth in the country by InterMat — to get a feel of the Big Ten experience on the road.

The hope will be that class is a factor in flipping conference results in the Terps’ favor next season.

“We have a good young group of kids waiting in the wings that are chomping at the bit,” Clemsen said. “I expect to reverse this next year.”