Maryland wrestling loses to No. 15 Rutgers, 31-13, is winless in Big Ten duals again 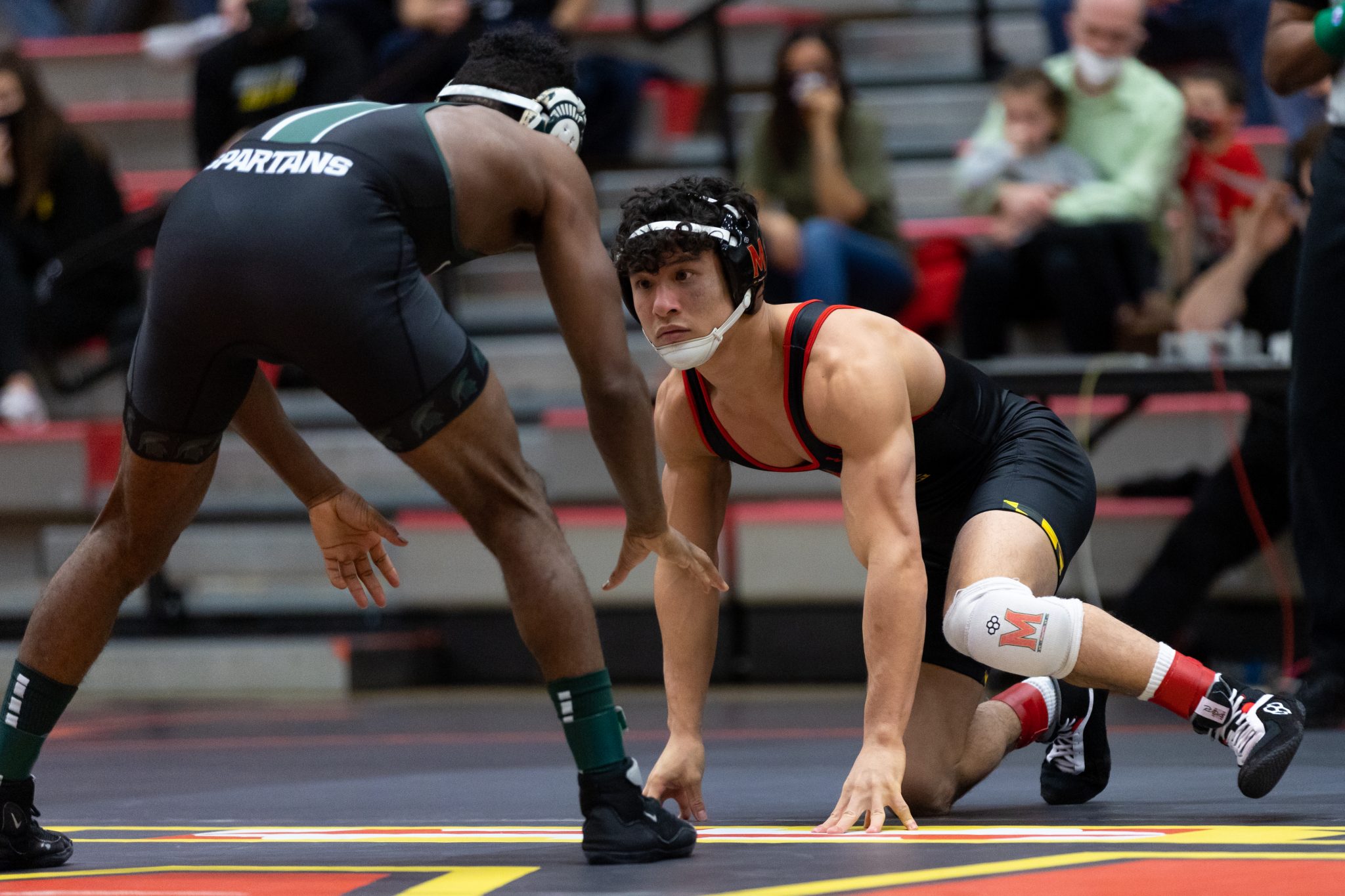 When the referee blew his whistle and raised the hand of King Sandoval, it signaled his NCAA Division I-leading 12th fall of the season.

But despite Sandoval’s performance along with wins by Dominic Solis and No. 16 Kyle Cochran, Maryland wrestling lost its ninth straight dual, 31-13, to No. 15 Rutgers. The Terps have gone winless in Big Ten duals again this season.

“In the matches, we competed really hard we had good fights,” coach Alex Clemsen said. “Some of the matches they didn’t do that we got beat up.”

Coming into the bout, Sandoval was on a four-dual losing streak during which he combined for only one point in total. But his offense returned in a big way with a quick finish over Devon Britton.

After starting in the neutral position Sandoval went on the attack early in the first period, securing Britton in a headlock.

From there, Sandoval twisted onto Britton’s back and lowered him to the mat before turning him over to his stomach to finish off the fall and give Maryland an early 6-5 lead, its only one of the afternoon.

“[Sandoval] almost had the headlock and went for it,” Clemsen said. That kind of got him rolling … he put it away.”

Solis picked up his third straight dual win over Connor O’ Neill. Solis rolled over O’Neill to clock an early takedown and the lead. From there, Solis racked up riding time along with another takedown and an escape to take a commanding 6-0 lead.

Another takedown helped to finish off a 9-1 major decision victory for Solis. He continues to build late-season momentum approaching the Big Ten tournament and he picked up the Terps’ second bonus points of the day.

“ I thought [Solis] did a good job of making sure that he dominated enough positions to get his hand raised,” Clemsen said.

Cochran got an early lead over No. 8 and All-American John Pozanski with a double-leg takedown. To start the second period, Pozanski got a reversal to take the lead, 3-2, but Cochran answered with a quick escape. In a scramble, Cochran grabbed Pozanski by the leg and head to drop him to the mat for another takedown to take a 5-3 lead.

To finish the second period, Cochran got on top and held off Pozanski’s attempts to escape. Cochran took over after an escape in the third period and he turned Pozananski over to get another takedown and an 8-3 lead.

Cochran finished off a 9-4 decision win in his home state and earned another ranked victory for his resume.

“I thought I performed really well,” Cochran said. [I] stayed on the attack and was really focused on my offense.”

But outside of those three performances, nothing else went Maryland’s way — the Terps were unable to pull off an upset win to close the conference season.

At 125, No. 28 Dylan Shawver locked in two cradles on Tommy Capul for eight near-fall points. Shawver won by tech fall in the first period to punctuate Maryland’s struggles at 125 this season.

After Sandoval’s win, the Terps’ momentum dissipated — the strength of the Rutgers lineup at 141 and 149 was too much for Maryland.

[Despite flashes of opportunity, Maryland wrestling succumbed to poor execution]

Danny Bertoni was no match for No. 3 Sebastian Rivera’s offense. Rivera contributed a 20-3 tech fall win and the Scarlet Knights took the lead back, 10-6.

No. 15 Michael Vanbrill shut out Michael North to extend the Rutgers lead to 13-6.

Losses at 157 and 165 only increased the Terps’ deficit. After Solis and Cochran’s wins, No. 30 Jaron Smith was unavailable to wrestle due to an injury and Kevin Makosy was also unavailable. Chase Mielnik moved up a weight class to fill in was pinned by No.12 Greg Bulsak.

Zach Schrader wrestled at the end of the afternoon. But Maryland didn’t get the finish it hoped for.

Boone McDermott got a last-second takedown on Schrader in the third period to win by decision, 3-1. McDermott handed Schrader his ninth straight dual loss, no doubt hurting him in his quest to make the NCAA tournament.

“[Schrader]  just relaxed a little bit,” Clemsen said.” I understand strategy and not wanting to extend yourself but you still got to finish periods by positioning and control.”

The Terps, now 5–12 on the season, will have to wait another year to snap their Big Ten winless drought that goes back to 2016. Maryland will quickly have to shift its focus to its final two duals before the Big Ten tournament — Columbia at home for senior night and an away matchup against American.