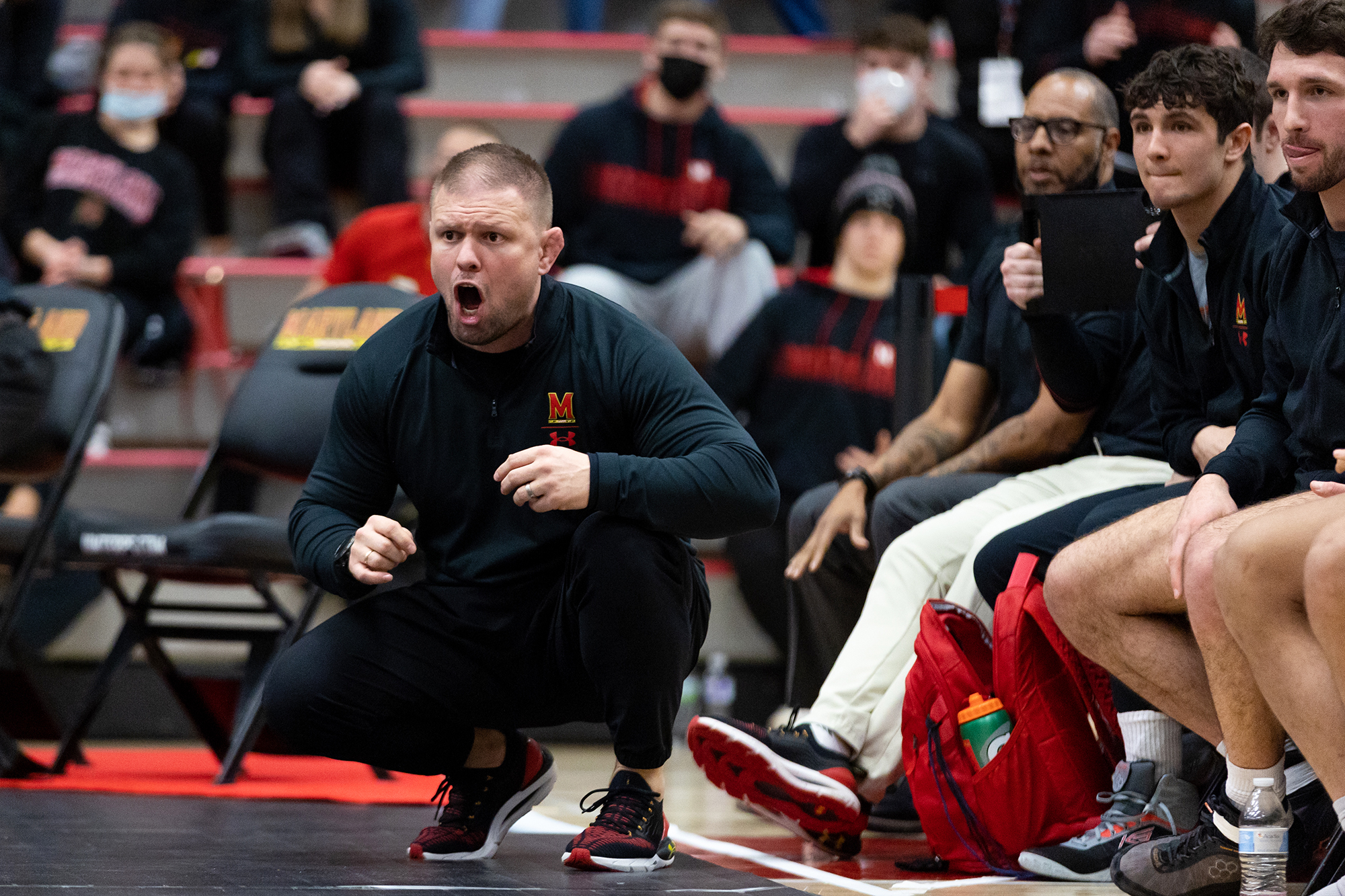 Coaches across sports have their wisdom and philosophies about how to run their teams.

Those words are written on the Terps’ wrestling room wall and they’re the four pillars every Maryland wrestler lives by as a member of coach Alex Clemsen’s program.

Clemsen introduced the four pillars when he took over as head coach of the program.

There were other words Clemsen considered including in his coaching philosophy. But the four words he chose are special to him — each pillar has its own meaning in different ways in regard to the team culture and what he wants to see in his program.

Sacrifice involves making a trade — giving something up to be successful in return.

Finally, perseverance involves doing the whole thing over and over again every time.

All four words are essential. Together, they create an infinite loop.

[Maryland wrestling went another year without a Big Ten win. Next year could be different.]

The pillars have had an effect on Maryland’s veteran wrestlers.

Lucas Cordio was a sophomore when Clemsen took over the program from the previous coaching staff and brought in assistants Nick Brascetta and Devin Mellon.

Cordio decided to stay with the Terps during the transition period and Clemsen explained to him what the four pillars were and what they were supposed to represent.

Cordio took those words to heart as a lifestyle, even putting faith, accountability, sacrifice and perseverance in his Twitter bio.

“I’m bought in,” Cordio said. “This is how I want to live my life … I wanted to learn what each of them really meant … so that those four words now represent my life in all facets.”

Dominic Solis had a similar reaction to his coach’s creed.

When Solis finds himself alone in the wrestling room, he looks up at the four words on the wall. A chill runs down his spine when he thinks about the significance of the words in front of him.

The four pillars have had a big effect on Solis as a person. He’s gotten closer with his teammates on and off the mat — they help Solis give his best every day and hold him accountable.

As one of the three captains in the program, accountability is a big pillar to Solis. He hopes to set an example every day in the wrestling room for his teammates while holding himself responsible for his progress.

That’s a part of the reason he believes he was named captain alongside Kyle Cochran and Michael North.

“I try to do everything right,” Solis said. “If I’m working my butt off in the room … and not caring what anyone else is doing just doing what I got to do to give my best effort. I know that’s gonna feed off of other people.”

All four of the pillars have had a big impact on Solis’ wrestling. However, he specifically signals out the first pillar, faith, as a particularly important one for him. Solis trusts the Terps’ coaching staff.

In high school, Solis didn’t go into matches with a game plan — he just went out and wrestled. But that mindset has changed during his time at Maryland.

Solis and the coaching staff have worked on his preparation for duals. They’ve put together game plans for his matches and Solis’ effort has not gone unnoticed — especially when he looks over at his corner for guidance during matches.

“I try to listen as much as possible and just trust like okay, I don’t know if this is gonna work but I’m going to trust [the coaching staff] because how much time and effort [they] have put into me,” Solis said.

Cordio also signaled faith as a favorite pillar of his. Just as Solis does, Cordio trusts Maryland’s coaching staff.

Cordio knows that listening to his coaches is going to get him to where he wants to be as a wrestler. Trusting what his coaches have to say gives Cordio the motivation to execute their advice on the mat.

“I’ve grown tremendously in my wrestling and how I present myself and how I like to wrestle,” Cordio said. “I know that what they’re gonna tell me to do is going to be the best for me to do and that’s how you grow as a wrestler.”

In year three of Clemsen’s tenure, the Terps sit in the basement of the Big Ten, still looking for their first conference win since 2016.

Clemsen has embraced the reconstruction of his program — he goes back to the old saying, “Rome wasn’t built in a day.”

“Some guy had to start laying bricks, and guess what, we’re that guy,” Clemsen said. “That’s the mentality we’re always going to have.”

Even after Clemsen’s wrestlers hang up their singlets and retire, his pillars will remain with them through the rest of their lives.

Cordio said he sees sacrifice, and the necessary trade-offs that come with it, as the best way to learn and become more successful in any field. The perseverance he learned from his time with Maryland wrestling will translate to whatever hard times he’ll face in his future.

Solis said sacrifice has helped him balance the weight of schoolwork and wrestling. It’s also helping him set his life up after wrestling — the four pillars are going to be a lifestyle to hold onto.

“I believe that all four of these pillars are going to be great words to live by, even after competing for Maryland,” Solis said. “Everything you do in your everyday life comes back to the four pillars.”

Clemsen and his coaching staff aim to prepare their wrestlers for life after wrestling. The program’s four pillars — faith, sacrifice, accountability and perseverance — will help the wrestlers make the transition from Division I athletes to the next stage of their lives a smooth one.