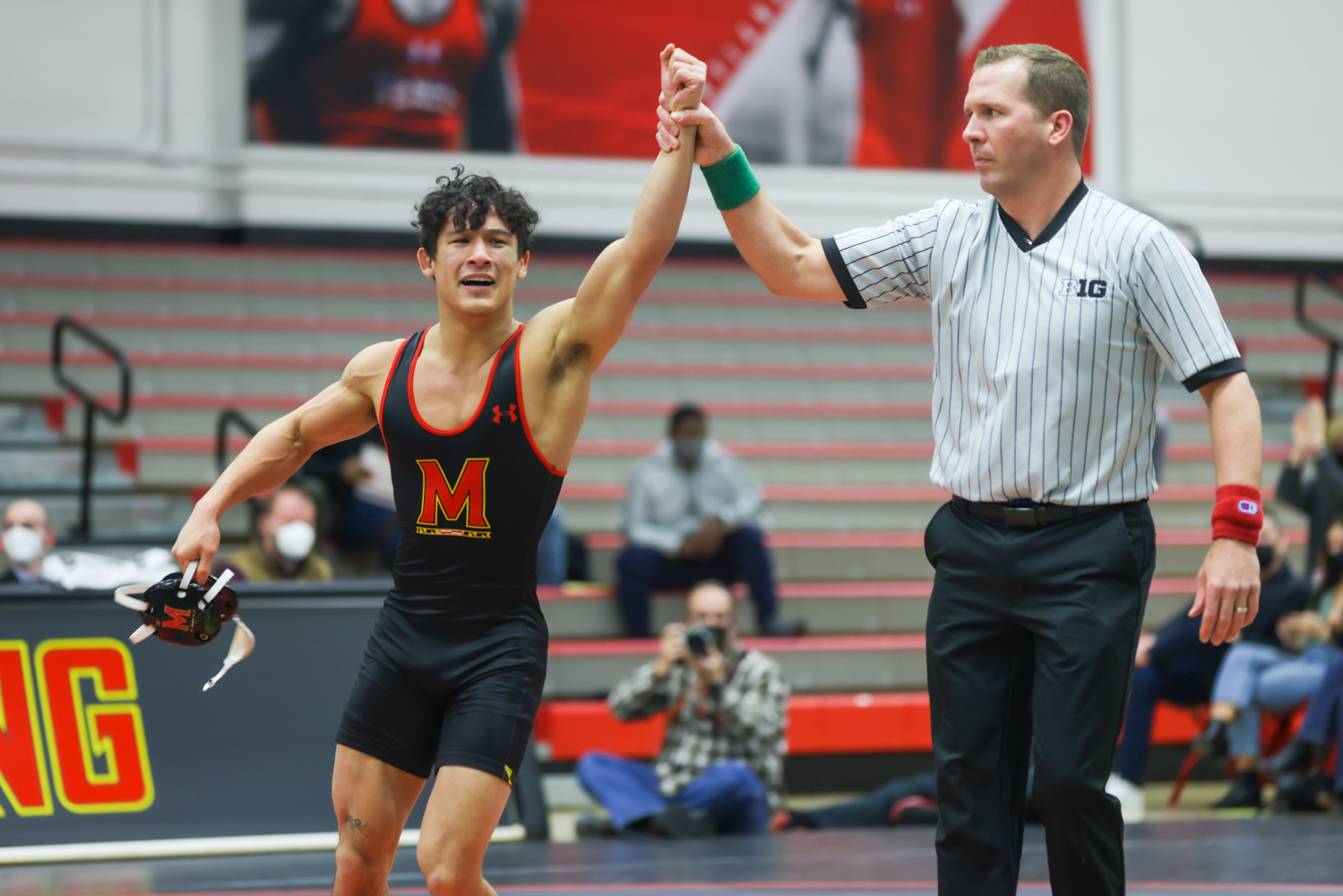 King Sandoval has his arm raised after beating No. 23 Angelo Rini during Maryland wrestling's 22-15 win over Columbia on Feb. 18, 2022. (Collin Riviello/TheDiamondback)

King Sandoval was on the hunt.

From the opening moments of the first period, the Xfinity Pavilion crowd could sense that a fall was coming and Sandoval looked to finish off his prey in quick order.

The NCAA fall leader turned No. 23 Angelo Rini onto his stomach and, when the referee gave the signal, Sandoval jumped up flexed his muscles.

He pointed to his bench, and sprinted to the locker room, showered with high fives from his coaches and teammates as the crowd leapt to its feet to celebrate one last fall from Sandoval at the Pavilion.

Sandoval’s 13th fall on the season along with strong performances from its four other seniors gave Maryland wrestling a 22-15 win over Columbia on senior night to snap a nine-dual losing streak.

Sandoval went on the attack looking to execute a cement mixer move on Rini, moving him across the mat. From there Sandoval finished Rini off in his final home dual and continued his quest to win the Schalles Award — given to the best collegiate pinner.

“That’s what [Sandoval] does,” Clemsen said. “He set the tone for us tonight, for sure that was big.”

In his senior night, Danny Bertoni used three takedowns and over three minutes in riding time to upset and defeat No. 20 Matt Kazimir to extend the Terps’ lead to 9-4.

Danny Fongaro dominated Michael North from the opening whistle to win by major decision. However, North fought off Fongaro’s pin attempt in in both the first and second period and got a late takedown in the third period to prevent a tech fall and keep Maryland’s edge intact, 9-8.

“North never quits,” Clemsen said. “I think tonight [embodied] that more than probably any victory he’s had this year.”

North’s fight keep the momentum on the Terps’ side for Lucas Cordio.

Down 4-3, Cordio got a late takedown on Andrew Garr and finished off the period with two crucial near-fall points to extend his lead to 7-4.

In the third period Cordio got another takedown, going up, 9-4. From there Cordio held off Garr’s late comeback attempt to win by decision, 9-8, and Maryland was up 12-8 over the Lions in the best performance from their early wrestlers all season.

“If that pin happens [on North] maybe Lucas Cordio doesn’t wrestle as well as he does because there’s so much momentum,” Clemsen said.

But, No. 19 Joshua Ogunsanya would get a major decision win over Gaven Bell to tie it up, 12-12. Now, the dual was set up for the Terps back end of the lineup to snap their losing streak.

After being awarded a caution point, Dominic Solis reversed Nick Fine to take a 5-3 lead late in the second period. But Fine used two escapes and a takedown to push ahead, 7-5. He would finish off a decision win and give the Lions a 15-12 lead while snapping Solis’ recent hot stretch.

“I’d like to see Solis wrestle in his positions a little more,” Clemsen said. “He wrestled really hard like he always does and fought rally hard. I just don’t think he wrestled very smart.”

A dual win for Maryland would come down to three of the Terps’ most experienced wrestlers on their senior night No. 10 Kyle Cochran, No. 29 Jaron Smith and Zach Schrader.

Cochran faced off against Brian Bonino, using multiple takedowns including a crucial one late in the third period to earn a bonus point and win by major decision.

“I wanted to go out there and get the major to put extra points on the board for my team,” Cochran said.

From the opening whistle, Smith went on the attack getting two explosive early takedowns over Sam Wustefeld. Smith would add another takedown late in the second period and rode out Wustefeld the rest of the bout to win by decision, 9-2, and extend Maryland’s lead to 19-15 with only Schrader left to close it out.

Needing just to avoid a major decision loss or worse for the Terps to win the dual, Schrader played defense and used a reversal on Danny Conley to take a 3-0 lead into the third period.

From there Schrader got a takedown and rode out Conley to finish the win off and snap his nine-dual losing streak to get back on track in his quest to make the NCAA Championship.

All five of Maryland’s wrestlers who were honored for senior night picked up victories and the Terps picked up momentum heading into their last dual of the season on Saturday against American — the final preparation for the Big Ten tournament in March.

“Life’s easier when you’re winning,” Clemsen said. “Hopefully we can ride a little momentum and we’ll have another good performance at American.”