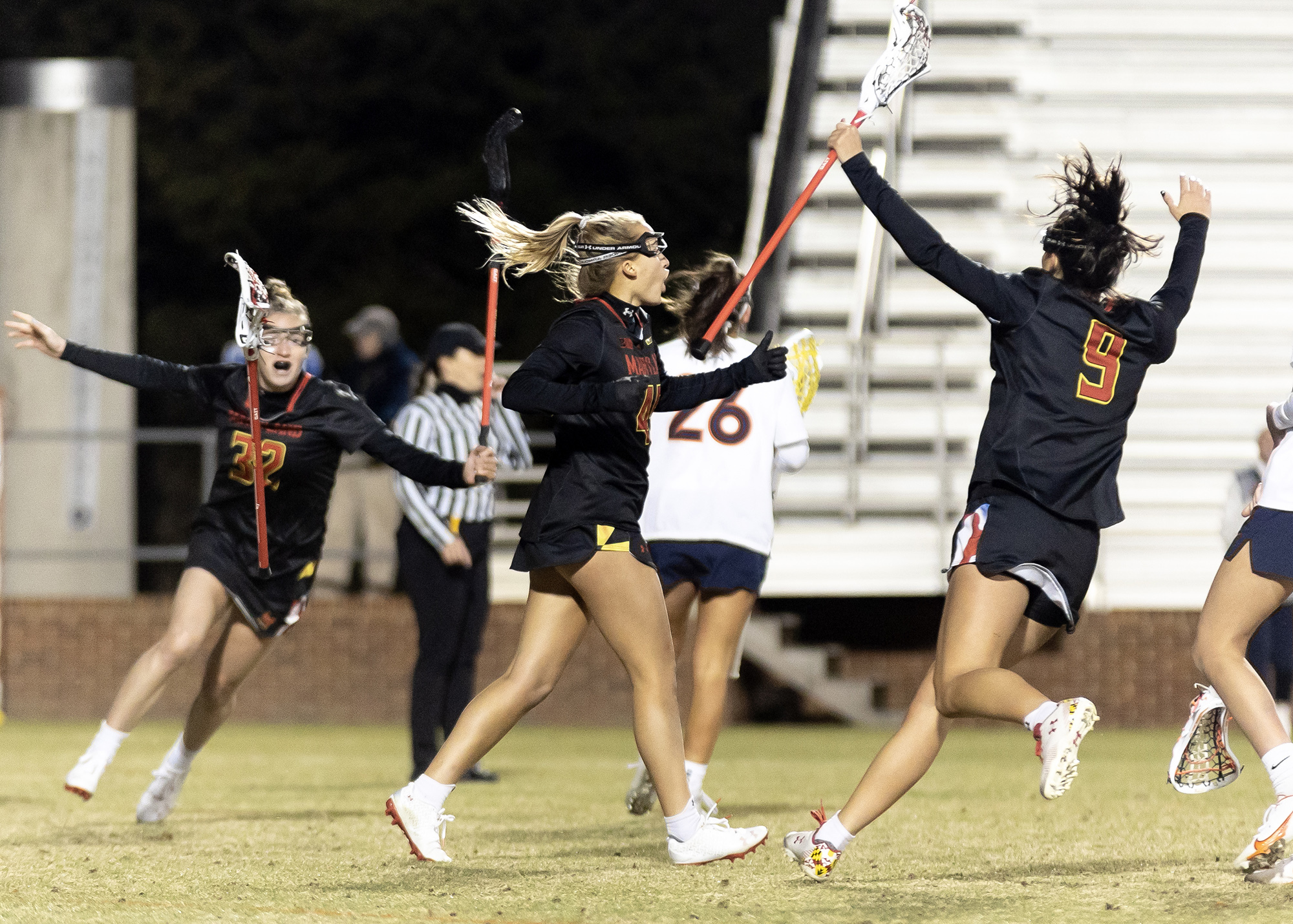 Hannah Leubecker, Libby May and Shannon Smith celebrate after a goal during Maryland women's lacrosse's 17-13 win over No. 10 Virginia on Feb. 18, 2022. (Julia Nikhinson/TheDiamondback)

CHARLOTTESVILLE, Va. —After not scoring for the entire second quarter, No. 8 Maryland women’s lacrosse came back with a vengeance in the third quarter.

Hannah Leubecker started off the scoring spree, firing the ball into the net. And No. 10 Virginia couldn’t keep up.

After a first half of back and forth play, the Terps came back in the second half with dominant offense and aggressive defense to win their second game of the season against a former rival in the Cavaliers, 17-13.

“It’s so early in the season that we have to go through these ups and downs to learn about ourselves,” coach Cathy Reese said.

The Terps started off strong with attacker Libby May scoring the first goal of the game with an assist from Grace Griffin. Shannon Smith lobbed in the second goal just over 10 seconds later. Virginia responded with two goals of its own.

Maryland jumped back on top with a goal from Leubecker. Then in a repeat of the first goal, Griffin tossed the ball to May and she fired it in.

The Cavaliers kept their momentum alive, once again scoring two goals to tie the game back up at four apiece.

With just under three minutes left in the opening period, May chucked the ball into the back of the net, this time with an assist from Aurora Cordingley. She followed up with another goal to end the first quarter, 6-4 in favor of the Terps.

Virginia cooled down Maryland’s defense in the beginning of the second quarter. The Cavaliers scored another pair of goals and prevented the Terps from scoring during the entire second quarter.

Control of the second quarter continued for Virginia with three goals and aggressive defense that Maryland couldn’t seem to get around.

After dominating draw controls in the first quarter, the Terps couldn’t catch a break. The Cavaliers dominated the draw control in the second quarter winning five of six draws.

However, Maryland came back fighting in the third quarter. Cordingley won the draw control for the Terps to start the second half, paving the way for Leubecker to score the team’s first goal since the opening quarter. Smith followed shortly with another goal.

Maryland matched its reinvigorated offense with stronger defensive play. Reese’s squad shut out the Cavaliers during the third period after their poor defensive showing in the second.

Cordingley tied the game at nine, spinning away from Virginia defenders and whipping the ball into the net for her first goal of the game.

May was the one to put Maryland back in the lead for the first time since the beginning of the second quarter, with a strike assisted by Cordingley.

When the Virginia defense and goalkeeper moved up the field to compensate for a yellow card on one of their attackers, Leubecker struck next. She picked up a ground ball and lobbed it into the net before Cavalier goalkeeper Ashley Vernon could make it back to the cage.

“I picked it up and I was like this is going in the back of the net, there is no other way this could go,” Leubecker said.

Midfielder Shaylan Ahearn scored two of her own to give the Terps their first lead over two goals for the game.

With less than 20 seconds left in the third, Cordingley fired the ball in, ending the quarter with a score of 14-9.

Maryland overpowered Virginia at the draw, winning seven out of nine in the circle. Cordingley and attacker Eloise Clevenger proved to be dangerous on defense — the pair caused three turnovers.

But the Cavaliers had one more run in them. In the opening minutes of the fourth quarter, they scored twice and won the first three draw controls.

Virginia ended a five-minute scoring drought with a free-position goal, but the Terps kept the edge, up, 14-12.

Similar to the second quarter, the Cavaliers took control, preventing Maryland from scoring, while slowly eating away at its lead with another goal.

Unlike the second quarter, the Terps came back and scored. Cordingley put her team on the board for the first time in the fourth and heaved the ball into the net again just over a minute later.

With just under two minutes left, Leubecker darted through Virginia’s defense and shot the ball into the bottom of the net, cementing Maryland’s lead at 17-13.

The Terps were able to run down the clock and earn themselves a top-tier win over a former-ACC rival.

“They brought the competition tonight,” May said. “It was really fun to show the ACC what we can do”