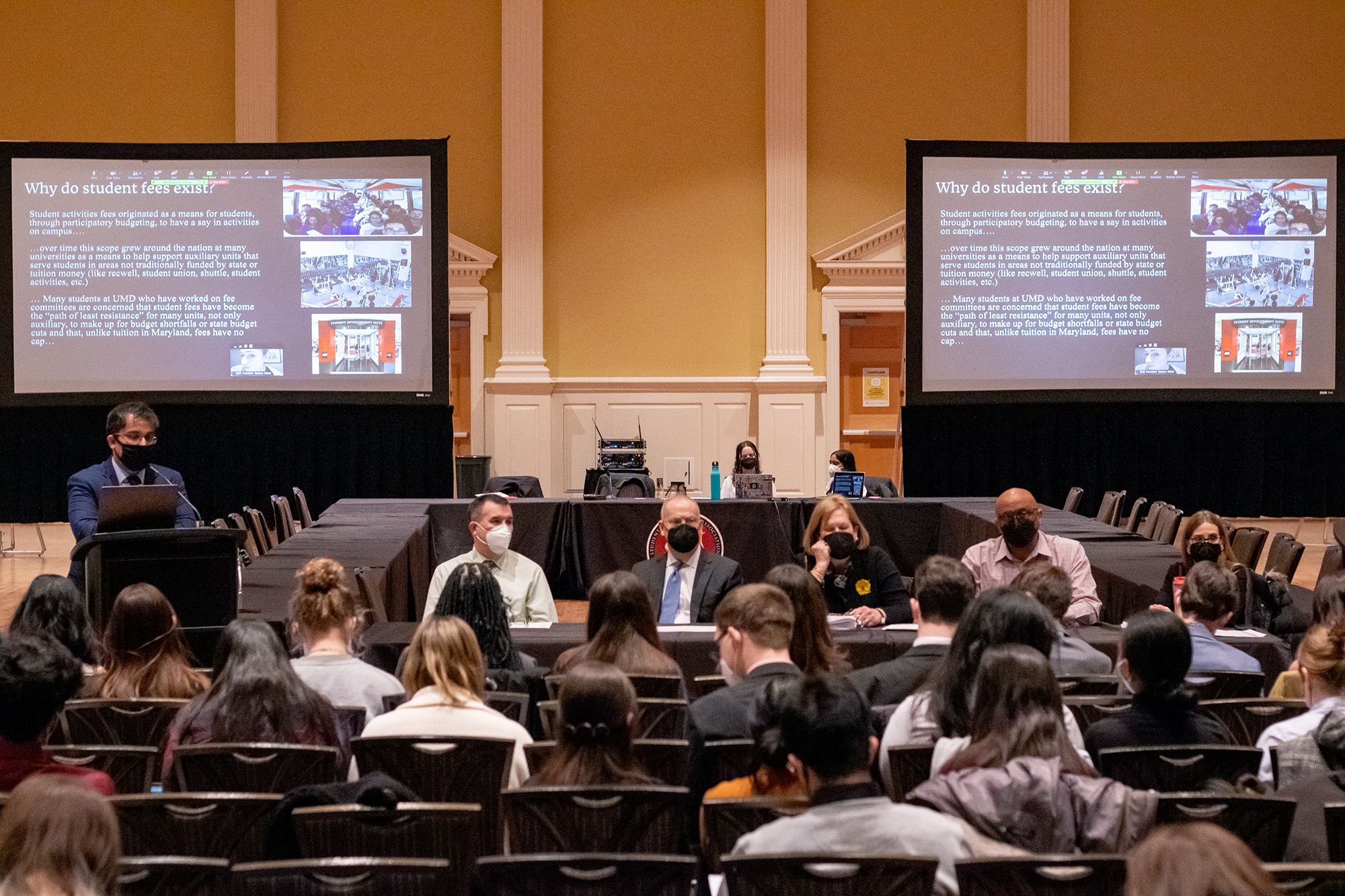 Students and administration gather in the Grand Ballroom in Stamp Student Union to hold a joint forum on student fees on February 16, 2022. (Jordyn Salow/The Diamondback)

By Trisha Ahmed and Victoria Stavish

Student groups at the University of Maryland hosted a forum Wednesday where they fielded questions from students about mandatory fees with university officials.

Leaders from the SGA, the Graduate Student Government and the Residence Hall Association held the event.

They were joined by university officials from Resident Life, student affairs, Dining Services and the Department of Transportation Services.

Usually, conversations about increasing or decreasing student fees happen behind closed doors between a few student leaders — including the presidents of SGA, GSG and RHA — and members of this university’s faculty, staff and administration, Parashar said.

The student fees, which are not included in tuition, go toward campus amenities including University Recreation and Wellness, Stamp Student Union, shuttle services and student activities.

Nina Jeffries, a senior environmental science and policy major and director of sustainability in SGA, brought up the mandatory student athletic fees during the forum, which she said, “just really makes me mad.”

Jeffries pointed to the potential to cut salaries of people in the athletics department, which can be as high as over $800,000.

“[The athletics department is] always saying [it doesn’t] have enough money,” Jeffries said. “Why are we increasing student fees … when in fact, you could be cutting people’s salaries?”

Allard also pointed to the lack of prevalence of mandatory student athletics fees for graduate students at other Big Ten universities.

Additionally, the fees put students living on a really low stipend at a disadvantage when considering the cost of living in this area, Allard added.

Forum participants also had questions about a mental health fee, which is a project Parashar hopes to propose soon, but is not an official fee yet, he said.

The mental health fee would create a “stream of financial resources for the Counseling Center so that they can provide mental resources to the students,” Parashar said.

Coming to almost two years in a pandemic, students are facing mental health issues at a larger scale, Parashar said. Once he proposes the mental health fee, Parashar said the fee will supplement the work of the Counseling Center and help it provide resources to students.

Parashar said his biggest takeaway from the forum was that students need more information about fees than they have now.

CORRECTION: A previous version of this story’s photo caption misidentified the forum’s location. The event took place in the Grand Ballroom in Stamp Student Union, not the Banneker Room. The caption has been updated.