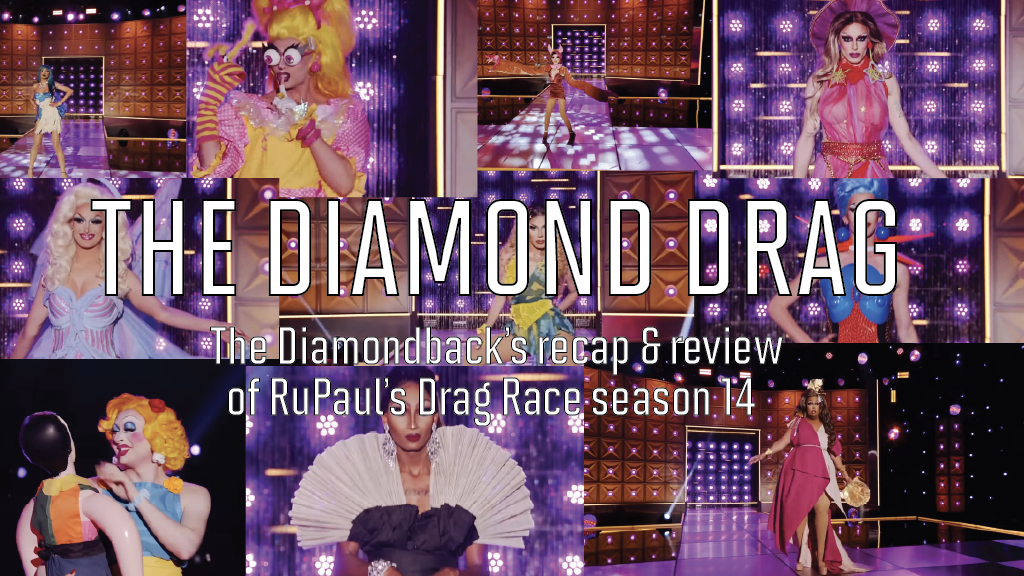 I want to start off this week’s review with a content warning, in a sense. I think every season the RuPaul’s Drag Race producers are required to have one episode where almost nothing about it makes sense and is solely done to create fan outrage and get people talking. It works — look at me now — but nonetheless it is still annoying.

The queens return to the Werk Room after Orion’s elimination. Jorgeous is clearly feeling shook after lip-syncing for her life. The queens then begin to celebrate Bosco’s first win but in the midst of their celebration, Daya Betty is clearly feeling bitter for not being in the top.

The next day the queens walk back in ready to compete in another challenge. RuPaul then enters the Werk Room and solemnly delivers the news of Michelle Visage’s unfortunate late-night shopping addiction on Glamazon (nudge nudge, wink wink).

Luckily they’ve been able to treat her addiction but unfortunately, the queens are still stuck with the remains of Michelle’s many purchases. For this week’s challenge, the queens must use the materials found in the Glamazon boxes to create an outfit.

I love the unconventional material design challenges. It really tests the queen’s creativity.

Right off the bat, Jasmine Kennedie is excited. After crying because she didn’t win the previous sewing challenge, she’s ready to prove herself.

As the queens ravage through the boxes, we see Willow Pill struggling to open the boxes due to her chronic illness. This broke my heart and really annoyed me. Obviously Drag Race wants to have an even playing field for all the queens but this queen has a chronic illness. Give her some scissors or a box cutter or something.

The queens begin construction and everyone is looking for the win. Daya is feeling very confident as she makes a lot of her drag from unconventional materials. She’s also feeling very … protective, for lack of a better word. She proudly announces she will be doing a baby doll concept and after hearing that Willow is doing something similar, Daya pulls her aside and basically tells her, “I’m doing it so you can’t.”

Construction continues and everyone is very intensely focused. RuPaul then enters the Werk Room with Carson Kressley to check in on the queens and chat with them.

I love Carson Kressley so much. He’s absolutely hilarious while also offering great feedback and fashion advice. One by one the queens go over to him and we for sure see lots of foreshadowing.

RuPaul’s advice is usually good but also misdirected sometimes. For example, Lady Camden talks about her outfit and inspiration and in response Ru tells her she needs to draw her lips bigger.

Maddy Morphosis then goes to receive feedback and Ru explains she needs to find her inspiration down here and gestures to her nether regions. Both Ru and Carson then so eloquently state her pussy needs to be on fire, a classic Drag Race adage meaning you need to have that passion.

The final standout moment from Ru and Carson’s Werk Room chats is the awkward moment between them and Daya. Daya asks what she can do better to land in the top and she gets told to be herself more and stop looking like her drag mom/mentor, and Drag Race alum, Crystal Methyd.

The queens continue to make their garments and Jorgeous is having some trouble with the original material she chose. She scraps what she had and uses some extra material Angeria Paris VanMicheals gave her.

We hit the runway and it’s time to see what the queens made.

From this moment on, nothing about this episode made sense. My personal favorites were Lady Camden, Daya Betty, Angeria Paris VanMichaels and Bosco. My least favorites were DeJa Skye, Maddy Morphosis and Jasmine Kennedie.

RuPaul announces the top three queens to be Lady Camden, Angeria and Jorgeous and the bottom three to be DeJa, Jasmine and Maddy.

RuPaul announces Jorgeous as the winner and I could not disagree more. I do think she did fine but I thought she just made a safe garment, not a winning garment. To me, Lady Camden should’ve won and I even think Daya Betty should’ve been in the top.

Jasmine and Maddy are announced to be the bottom two and I agreed with this. The queens lip synced to “Suga Mama,” by Beyoncé and I think the lip sync was generally strong. If Maddy sent home a queer person to Beyoncé as well as a Kylie Minogue song, when she lip synced against June Jambalaya, I think that could’ve been considered a hate crime.

Jasmine wins the lip-sync battle and Maddy reveals her chocolate bar and does not have the golden bar.

This episode was just wack, plain and simple. The challenge had the potential to be really fun but questionable judging choices just really turned me off to the whole episode. Hopefully next week is a little better and more justifiable, but knowing Drag Race I cannot guarantee that.