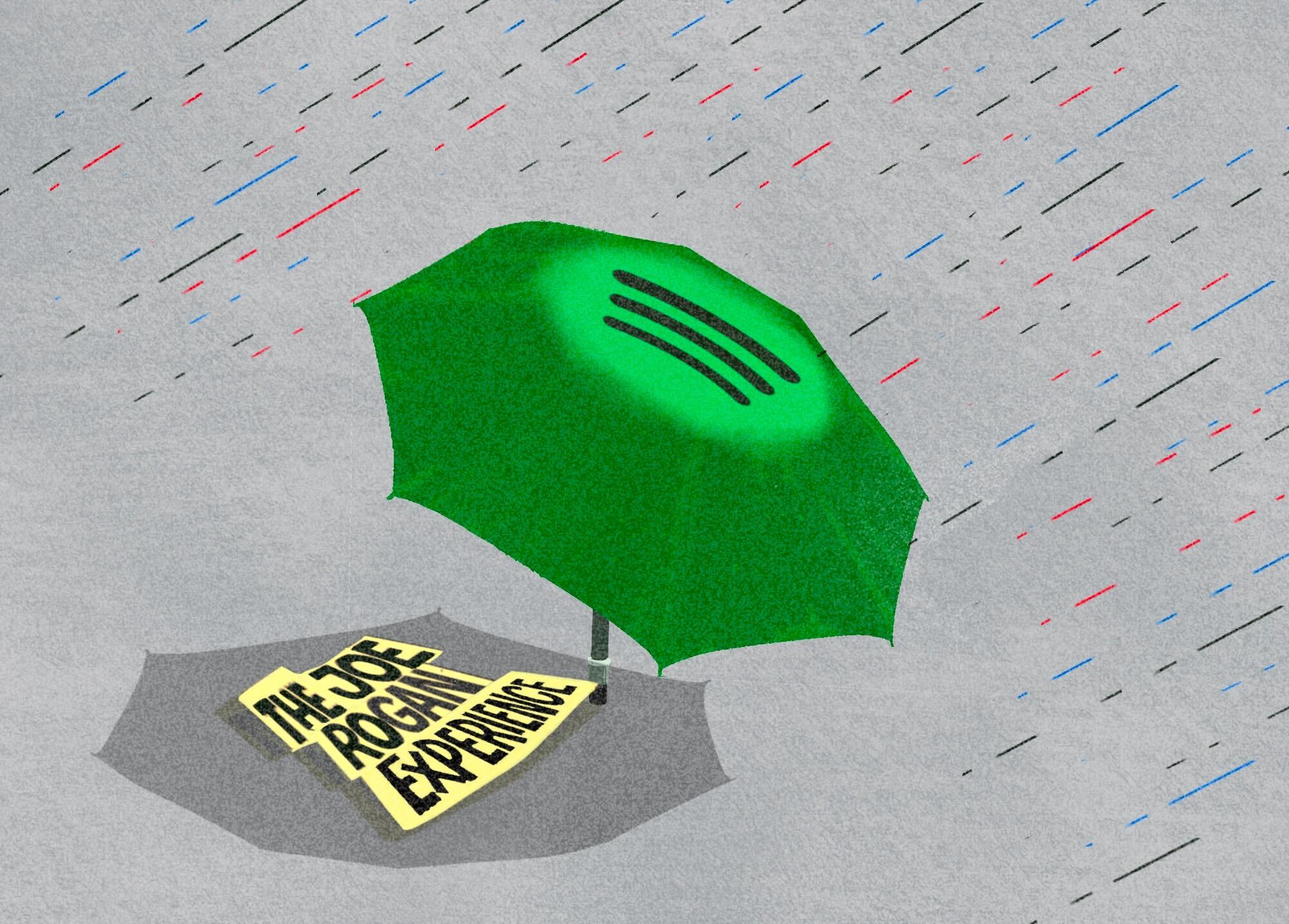 Recently, Spotify has come under attack for keeping episodes of comedian Joe Rogan’s podcast on its streaming service.

Singer-songwriter Neil Young asked Spotify to remove his music from the platform as a protest against keeping Rogan’s podcast on the platform. The company had signed an exclusive deal worth $100 million with the comedian to host the podcast on Spotify. Young’s protest was shortly followed by other artists, such as singer-songwriter Joni Mitchell, who requested their music be removed in solidarity with Young.

Sophomore information science major Leilani Martinez said she is pleased with the decision that Young made to remove his content from Spotify, except now she’s sad that it’s harder to stream his music.

Martinez isn’t the only one who wasn’t surprised by Spotify’s decision to keep Rogan’s content on their service, even after artists like Young retaliated.

The company’s CEO, Daniel Ek, released a message to employees saying that while he condemns what Rogan said, he does not believe that silencing him is the answer. Jack Landau, a senior operations management and business analytics major, said he wasn’t surprised that Spotify decided to stick with Rogan.

“When you look at the amount of viewers that he’s getting, and just the market share he has, I think every man ever has been exposed to Joe Rogan, whether they like his content or not,” Landau said.

Musicians haven’t been the only group attempting to call out Spotify for their actions. A group of more than 270 medical professionals released an open letter to Spotify to implement a misinformation policy.

“We are a coalition of scientists, medical professionals, professors, and science communicators spanning a wide range of fields such as microbiology, immunology, epidemiology, and neuroscience and we are calling on Spotify to take action against the mass-misinformation events which continue to occur on its platform,” the group wrote.

Some students have supported Spotify in their decision to keep Rogan on its platform. Harshit Garg, a freshman enrolled in letters and sciences, said he believes Rogan should stay on the platform, and he commended Spotify for their hard decision.

“Speech does not matter whether it’s true or false because the arbiter will deem stuff true for their own benefit or false when it’s beneficial that time; and so I think that people need to become attuned to figuring out what’s true, what’s false, and making that decision on a personal level,” Garg said. “De-platforming has no place anywhere.”

Although Spotify has kept most of Rogan’s podcast on their service — including episodes surrounded by controversy of spreading coronavirus misinformation — they did remove about 70 episodes recorded between 2009 and 2018. The removal of these episodes occurred around the same time that Rogan apologized for using racial slurs on his podcast, including the N-word. One of the guests from these 70 removed episodes includes Youtuber Gad Saad, who tweeted about the removal.

“I believe that in that particular episode (if memory serves me right), Joe had uttered the N-word (I can’t remember the context but it was not in a racist manner notwithstanding the likely minefield),” Saad wrote in the tweet.

Rogan spoke up about the controversy around his podcast in an almost 10-minute video posted on his Instagram on Jan. 30. He said many of the things we once considered misinformation about the coronavirus were proven as fact, such as cloth masks not being as effective as other masks.

Users who disagree with Spotify’s decisions can boycott the platform or switch to another music-streaming service. However, Landau said that it is hard to do this because of limited options and Spotify being at the top of the food chain for music services.

“I’ve been thinking about it over the past few days and talking about it with people and unfortunately streaming in its current form is not something that’s really, you know, able to go away at the moment,” he said.