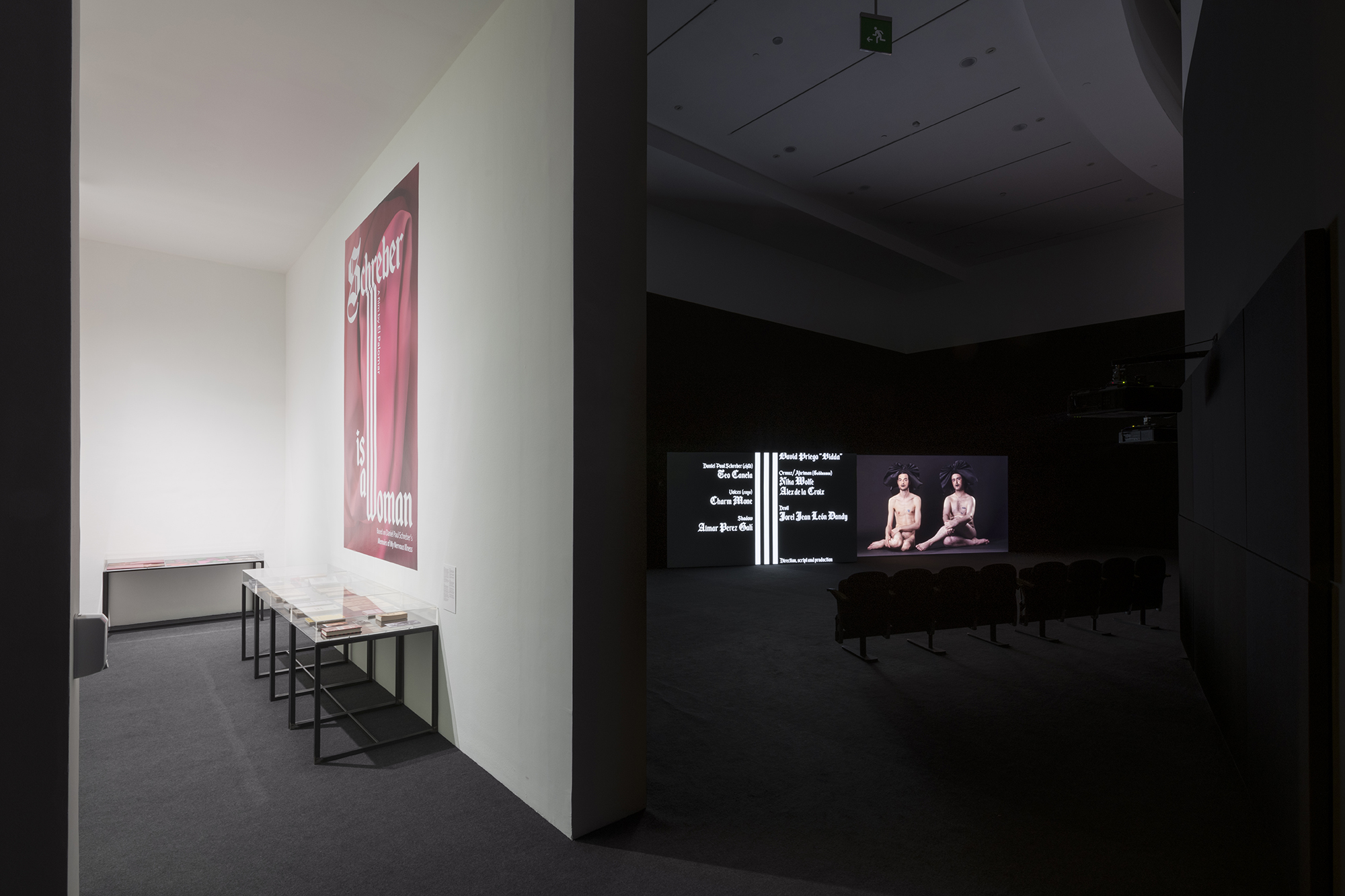 Two large screens, with the left just overlapping the right, flashed erotics scenes and ambient sounds to capture the unconventionality of sexuality that lies beyond classical binary archetypes. Standing in front of a dark navy blue background, one actor rotates in front of the camera, emotionless and confined.

“Schreber is a Woman,” a video installation commissioned from the Barcelona-based art collective El Palomar for the 2020 Berlin Biennale, investigates queer history from the experiences of Daniel Paul Schreber, a German judge who was held in a psychiatric insitution in Saxony, Germany, in 1894, according to the Berlin Biennale. The installation seeks to reinterpret the writings of Schreber from his 1903 Memoirs of My Nervous Illness, in which Schreber recounts feeling like a woman.

El Palomar, which was formed in 2013 by Mariokissme and R. Marcos Mota, focuses on queer empowerment, community building and investigating the hidden histories of the LGBTQ+ community. This installation, among previous films, aims to accelerate LGBTQ+ participation in the Spanish contemporary art scene, the founders of El Palomar wrote in an email.

In 2016, the art collective produced a film titled “It’s not homosexual just the homophilic but also the one blinded by the lost phallus.” Based on a draft of a short film by LGBTQ+ activist Alberto Cardín, the film is the first chapter of an audiovisual trilogy. “Schreber is a Woman” is the second chapter.

Zeroing in on the images and sounds Schreber describes in their memoirs, the installation diverts from historical circumstances of queerness and reconceptualizes gender identity and sexual pleasure in today’s world, according to the Berlin Biennale.

“We believe that Schreber expressed their nonconforming gender through [schizophrenia],” El Palomar wrote. “The fact that [Schreber] couldn’t express themself at all was because of the restricted morality of their time, and [so they lost] the reins of rationality.”

Envisioning Schreber as a woman or nonbinary person, El Palomar created a project where Schreber was the main character and had a virtual space to express themself.

“Delusions gave Schreber more satisfaction than probably real life,” the founders of El Palomar wrote in an email. “In ‘Schreber is a Woman’ we created a narrative place for those delusions to be, and to develop into Schreber’s happiness.”

For this reason, El Palomar’s script was heavily influenced by Schreber’s own words; in fact, “Schreber is a Woman” is mostly a conceptualization of the different delusions described by Schreber, El Palomar wrote.

“Schreber described different Gods of their invention that in our film we represented with trans women,” El Palomar wrote. “This detail is important to understand the reality from where we wanted to portray Schreber.”

The split screen used to display the short film also works to this effect, acting as a parody of binarism as it requires the audience to choose where to look. Likewise, it serves as a critique to realism — the audience is held in a moment of illusory transformation, which is a theme in Schreber’s memoir as they speak of the prevailing desire to transform from a male body into that of a woman, the founders of El Palomar wrote in an email.

The chaos that stems from confusion over one’s identity is something Teva Kenny, a junior at Boston College, said is clearly portrayed throughout the film.
In Schreber’s case, the scenes that address self-pleasure illustrate the desire to be pleased as both a man and a woman, Kenny said.

“The reason why it’s such a huge, overplayed scene, I think, [is that it] is like dramaticized to the extent of not knowing how we please ourselves physically based on our gender,” Kenny added. “But also how intense we view sex, especially that concept of like, what’s in somebody else’s pants?”

The musical production, carried out by El Palomar, specifically Mariokissme, was lyrically based on Schreber’s memories, El Palomar wrote.

Charm Mone, a Brazilian transgender singer and friend of El Palomar, is heard throughout the film alongside David Priego Vidda, who plays Schreber’s character in the film and is featured on the two Spanish songs — “Una Mujer” and “No Estoy Loca” — on the otherwise English soundtrack.

Many vocal extracts gained influence from the voices Schreber wrote about hearing during their nervous breakdown, El Palomar added.