From Jones to Ivey: Maryland volleyball is growing from focused DMV recruiting 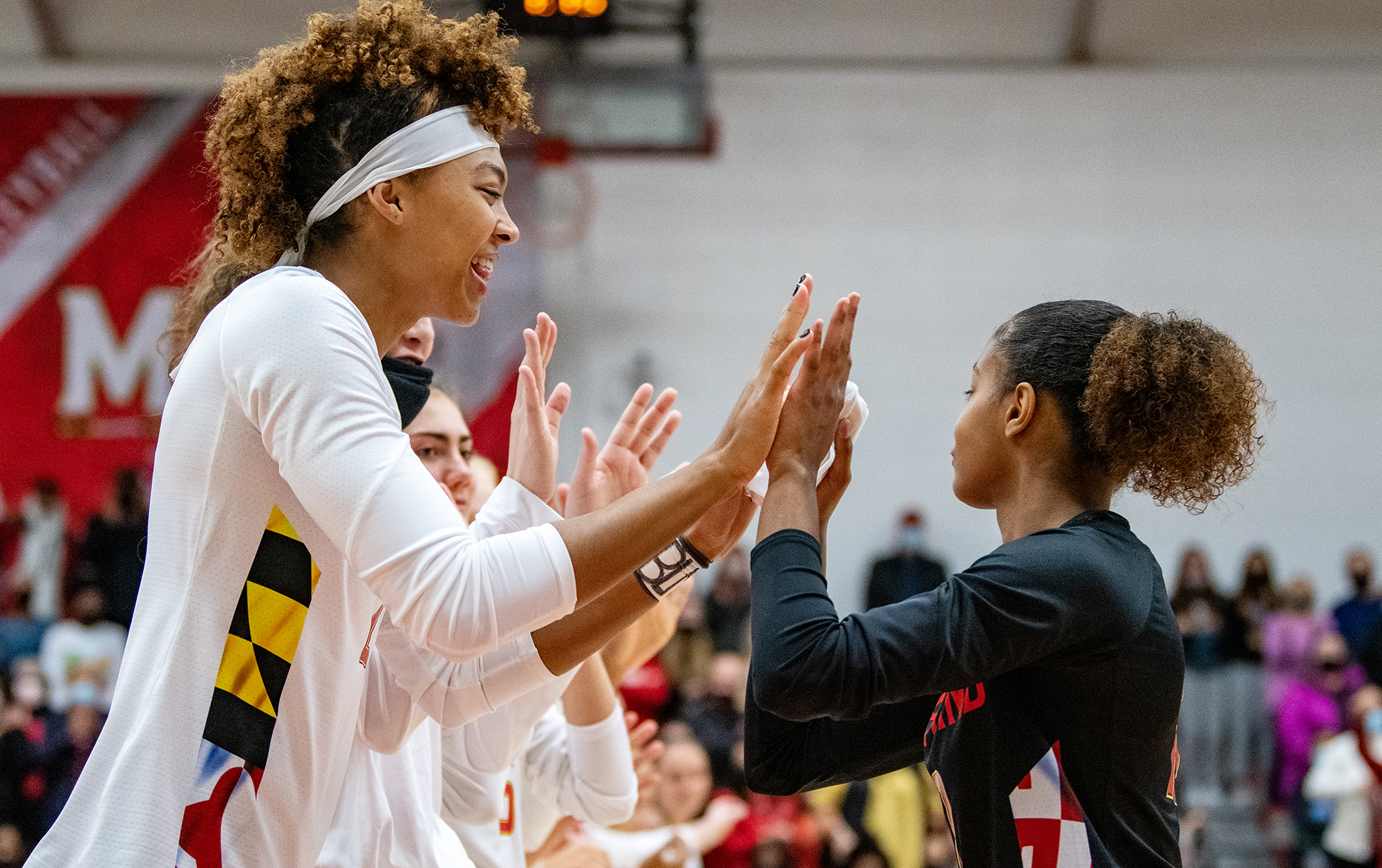 There’s a buzz inside Xfinity Pavilion when Rainelle Jones rises for a block attempt — the middle blocker is greeted with a cacophony of cheers as the ball careens back to the hardwood.

Jones’ clinical blocking displays have become a staple over the course of her four seasons with Maryland volleyball. Local fans have packed ‘The Pav’ for years to watch the Oxon Hill native impose her will on the nation’s elite.

“I feel like the roar of everyone is super awesome,” Jones said of the Pavilion’s rowdy attendants. “It brings [the team] up, and really brings the vibe up.”

Jones, the Terps’ vocal leader, has embodied the spirit of coach Adam Hughes’ squad ever since she decided to represent her home state in 2018. She leads a long line of high profile volleyball recruits with ties to the Washington, D.C.,-Maryland-Virginia area, thrusting the region into the spotlight as a hotbed for emerging talent in the college game.

Recruiting well in Maryland’s backyard has been a point of emphasis over the course of Hughes’ four seasons at the helm in College Park.

“It’s important for us to have some of the best players locally who continue that path there from the DMV to UMD,” Hughes said. “[We] want to make sure that the best and brightest are staying at home.”

Jones isn’t the only local player making an impact at the Pavilion.

Big Ten All-Freshman honoree Milan Gomillion hails from Bowie, and freshman setter Zoe Huang came to the Terps from Centreville, Virginia. Middle blocker Laila Ricks rose to prominence in the DMV area before moving to California to close out her high school career.

Newly signed outside hitter Laila Ivey rounds out Maryland’s current batch of local products, each of whom brings a unique skillset to Hughes’ program.

It’s a sign of the times, Hughes said. The Washington Catholic Athletic Conference houses some of the most prominent men’s and women’s high school basketball programs in the country.

But the landscape is changing.

“This area as a whole has grown tremendously,” Hughes said. “It’s always been a [historically] good basketball area, but I think we’re getting a lot more opportunities for young players to not just participate [in volleyball], but also to see it.”

Scores of local high school players made the trip to the Pavilion to witness Hughes’ program face off against some of the Big Ten’s storied volleyball programs.

Ivey remembers witnessing Maryland’s historic 3-2 victory over Wisconsin in September. She sat close to the floor when the Terps flooded the court in triumph after Sam Csire’s kill knocked off the then-No. 2 team in the country.

“I went to the first game against Wisconsin, which was insane,” Ivey said. “I remember coach [Hughes] telling me how he likes how the Pavilion is smaller than most volleyball gyms, so you can just pack it up and it’s just loud and the fans are cheering.”

A First Team All-American outside hitter from Annapolis, Ivey comes from the same club volleyball pipeline as each of the Terps’ other local products — Metro Volleyball Club of DC.

Silvia Johnson, the club’s director, spoke glowingly of Ivey’s potential after coaching her on the 18-year-olds travel team this past season.

Ivey joins a group loaded with talent on the heels of one of its most successful seasons in recent memory. A vast majority of Hughes’ roster is expected to return to the Pavilion next fall, with hopes of building on a year that already showed evident improvement.

And Jones couldn’t be more thrilled for Ivey’s arrival.

“I’m glad that we have another ‘Metro to Maryland’ kind of thing, I feel like we’re definitely keeping the program in the area,” Jones said. “The whole ‘DMV to UMD’ is still thriving, and I like that a lot.”

After finishing her senior season atop the NCAA blocking leaderboards with a dazzling 1.73 blocks per set average, Jones announced her intentions to return to Hughes’ squad for her fifth and final season in College Park.

Maryland’s star middle blocker has been the face of a program on the rise for nearly half of a decade and was given the opportunity to return for another year after a coronavirus-riddled spring season granted her an extra year of eligibility.

Yet while Jones’ on-court impact on Maryland volleyball has been paramount to the Terps’ success in a loaded Big Ten conference, it’s been her focus on becoming a leader and role model for young athletes that has pushed the program forward the most.

Following the Terps’ final match of the year — a 3-1 loss to Minnesota at the Pavilion — a swarm of Maryland fans filtered out of the arena for the final time in the 2021 season.

But Jones lagged behind.

Waiting for her at midcourt were a cluster of high school girls, each with ear-to-ear grins stuck on their faces as Jones approached them.

Then came the laughter, as Jones posed for dozens of selfies, made dance videos and offered advice to the young athletes.

“I … want to inspire them to be great and just be comfortable with [being] higher-level athletes [so] that they have a vision of what they can be,” Jones said. “Just making friends with them, if anything, and trying to let them know that this is a realistic goal.”

Jones’ efforts to foster a welcoming environment at the Pavilion encapsulated the crux of Maryland volleyball’s push for its local DNA. And while the program continues its ascension to national prominence, its roots remain ingrained in the DMV area.