Maryland gymnastics beats Pitt and No. 6 Minnesota in biggest upset in program history 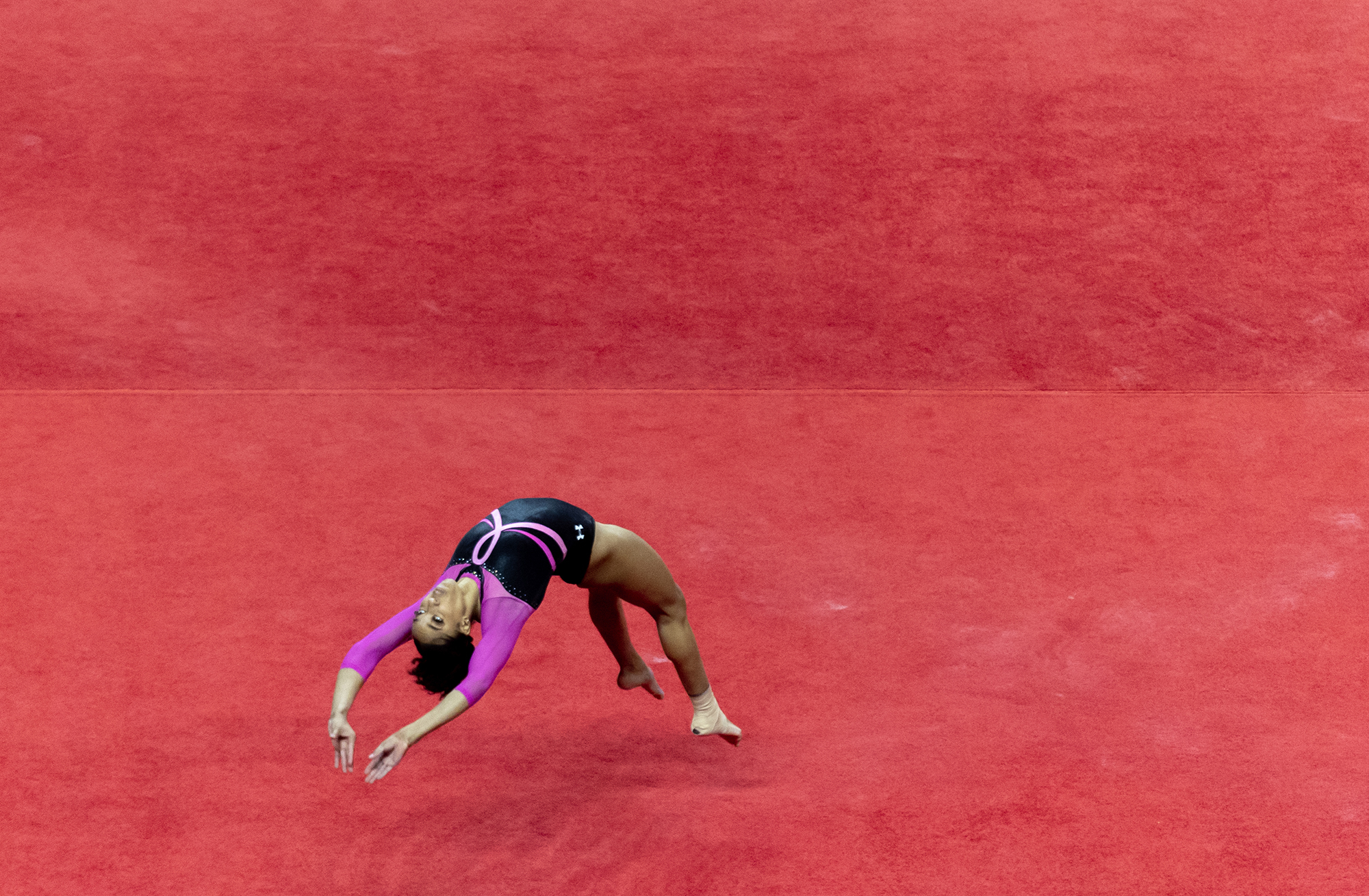 Audrey Barber does a back handspring on floor during the Terp Tri meet on Feb. 14, 2022. (Julia Nikhinson/The Diamondback)

With the improvement of Big Ten gymnastics throughout the years, Maryland gymnastics coach Brett Nelligan said that beating any Big Ten opponent would take a fight.

The Terps’ fight wasn’t to beat just any conference opponent, though. They fought the conference’s second-ranked team, No. 6 Minnesota, on Monday night.

With a score of 196.700, Maryland earned its fourth-highest score in program history en route victories over Pitt and the Golden Gophers, who are now the highest-ranked opponent the Terps have ever defeated.

It was a well-rounded effort for Maryland, which posted scores of at least 49 in all four events.  The scores of 49.325 on bars and 49.225 on floor were the highest marks this year, and its score of 49.000 on beam tied its season-high.

After jumping out out to a full-point lead over Minnesota and a 0.425-point advantage over Pitt following the first two rotations, the Terps moved to beam, their lowest-scoring event of the season.It wasn’t the best start on beam for Maryland. As they entered the latter half of the rotation, the Terps’ first three competitors were averaging 9.65.

“It’s always pushing forward, no matter what happened. And that’s if the routines are going smoothly, if the scores are good, it doesn’t matter. We keep on our pace of pushing forward, and that’s what they did so well tonight, they didn’t let anything affect them,” Nelligan said.

Kogler’s vital 9.875 on beam was key for the Terps — Kogler’s score started a burst of energy in her squad. She did all of that while dealing with an injury.

Nelligan said Kogler has been battling an ongoing sore ankle. Despite that, Kogler put up scores above 9.800 in both events she competed in.

Typically, Kogler competes in three events — vault, beam and floor. However, with Kogler’s injury, she approached the coaching staff on Sunday to inform them of her high pain levels. She didn’t compete on floor during the Terp Tri.

Replacing Kogler on floor was Tayler Osterhout, who originally was going to be used in an exhibition slot for the Terps.

Osterhout got a bone-bruise while warming up for the Terps’ first meet on Jan. 16. Despite her return being earlier than anticipated, Osterhout scored 9.850 in her season-debut.

[Maryland gymnastics prepares to open up three-meet week against Nebraska]

“As soon as [the injury] happened, I really wanted to get back into treatment and do whatever I can to get ready as fast as I can to be back out here with my team. . . I was just super excited and ready to compete and help my team,” Osterhout said.

Osterhout was one of four Terps to score 9.850 or above on floor. Prior to the Terp Tri, Maryland earned only two scores of 9.850 or above, both of which came on Friday against Nebraska.

Audrey Barber posted 9.900 on floor and both Emma Silberman and Alexa Rothenbuescher scored 9.850. All of those scores set or tied their highest of the season.

For Barber, it was one of two 9.900’s of her outing. She left the meet on a roll, having scored five 9.9+’s between Friday and Monday.

The only other Terp to put up a score of 9.900 was Alexsis Rubio, who did so on vault for the second consecutive week. Rubio and Barber are the only Terps to average above 9.850 on an event — Rubio is averaging 9.86 on vault while Barber is averaging the same on bars.

The Terps will head to Toledo, Ohio for the annual Big Five meet on a high note after the biggest upset in program history. Maryland will face four conference opponents, all of which are among the top programs in the nation.