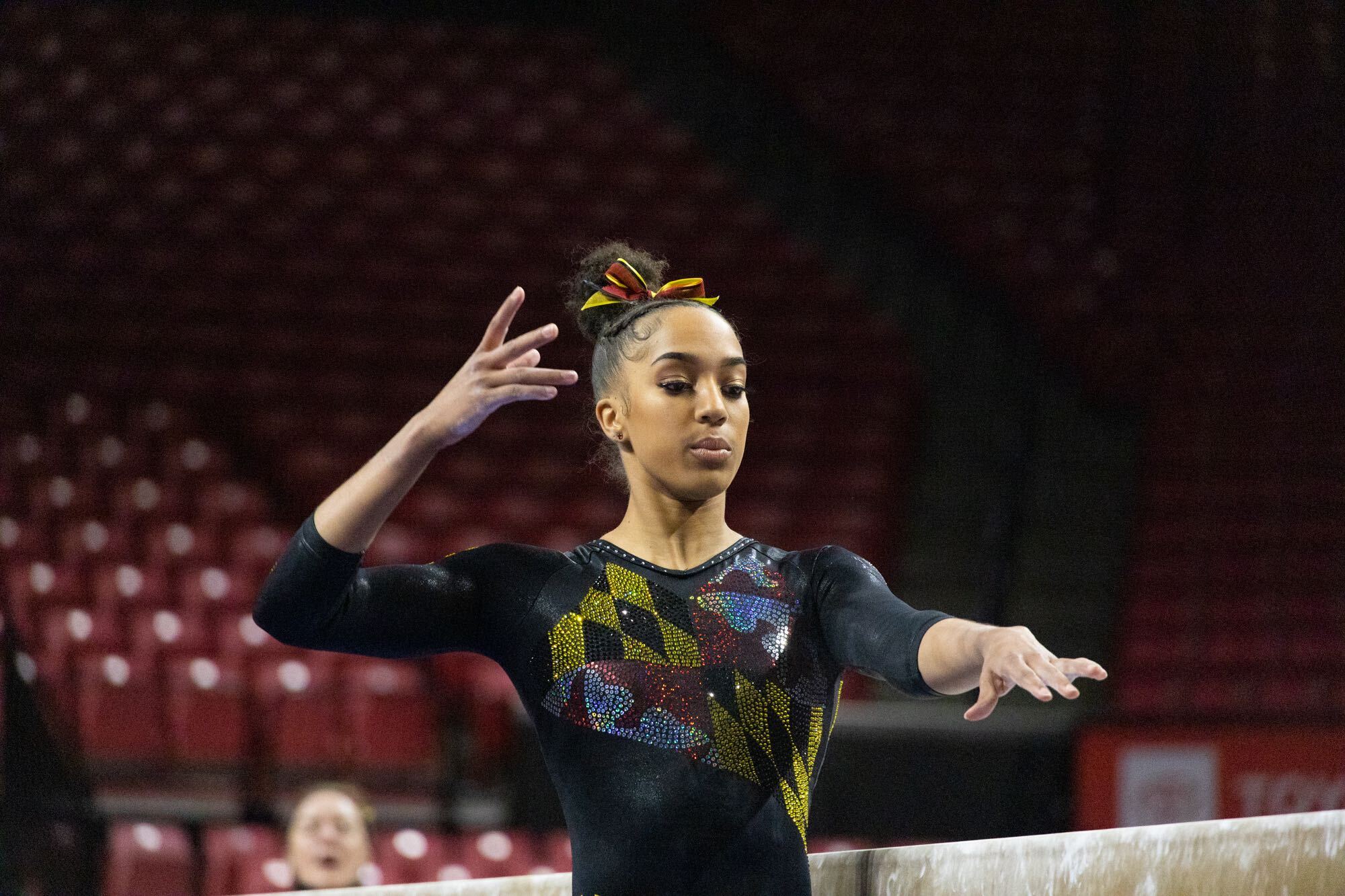 Ahead of Maryland gymnastics’ meet against Nebraska, coach Brett Nelligan mentioned how crucial strong lead-offs were to its success in the team’s last meet against Michigan State.

On Friday against Nebraska, freshman Josephine Kogler got it all started for the Terps with a 9.900 on vault.

And that was just the beginning of Maryland’s success, as Nelligan’s squad went on to score a season-high 196.125 — its highest score in its last ten meets.

The 196.125-195.625 win over Nebraska featured season-high scores in three out of the four events, and scores flying high across the board.

Prior to Friday, the Terps had yet to post a score of 9.900 or above, but did so five times against the Cornhuskers. Two came in the opening rotation from Kogler and Alexsis Rubio, who tied her career-high on vault.

The other three high scores were from Audrey Barber on bars, beam and floor, setting her personal-record on the All-Around scoring 39.575. Gilliam Cote and Rachel Martinez are the only Terps to score higher than Barber’s mark in program history.

“I was kind of nervous when I started because I was doing a new vault today. I think after I made my vault, I just kind of kept rolling,” Barber said.

Barber tested out a Yurchenko one and a half rather than a Yurchenko full. The difficult routine changes the start value from a 9.950 to 10. Despite the increased challenge, Barber scored 9.850 on vault, tying her season high.

[Maryland gymnastics prepares to open up three-meet week against Nebraska]

Following the 49.300-point rotation, it was more of the same on bars. Just like vault, Nelligan put a freshman slotted in the lead-off spot — and just like Kogler, Sierra Kondo posted her season-high, scoring 9.875.

With Nelligan valuing the lead-off spot so heavily, putting two freshmen at the front is not a light responsibility.

“That lead off position, you want to put it to someone that you trust, and a lot of times that’s not a freshman, you want them to get some experience first. But [Kogler] and [Kondo] are special. And we felt like they can handle it,” Nelligan said.

The praise and responsibility is not something that Kogler takes lightly.

“Obviously, as a freshman being on leadoff, it can be a big opportunity for you,” Kogler said. “Just thinking that the coaches gave me that spot gives me a lot of confidence.”

After both freshmen set the table strong on the first two events, the Terps hit a roadblock when they moved to beam — coming in the form of a flashlight.

Nelligan said he found Olivia Weir’s routine uncharacteristic. Then he saw flashes from the stands, and Weir fell.

After originally being scored a 9.250, judges reviewed the tape and the flashes were apparent. As a result, Weir was granted another opportunity, and retried her beam routine at the end of Maryland’s rotation.

Weir earned a strong 9.800. Still, for the five gymnasts who competed between Weir’s routines, the tone set on the first two events was disrupted.

“Well, you can tell it frazzled us,” Nelligan said. “And then we had to fight to close out the beam finish, so I think it’s just the toughness of this team.”

That toughness was apparent to close out the rotation. Kogler scored 9.800, Barber posted her career-high 9.925 and Weir’s second attempt improved to 9.800.

The win moved the Terps to 3-2, but more importantly showed improvement in its total score. Maryland’s score has increased in each of its four meets.

That’s something that they’ll likely need to continue in order to come out victorious in its next two meets, as the Terps face No. 6 Minnesota on Monday and square up against four conference opponents that include top-ranked Michigan next Friday in the Big Five meet.

“We talked about it before the meet that every conference meet, we’re up for a fight,” Nelligan said.

With the Big Ten as strong as ever, Maryland is tasked with improving with the rest of the conference. Thus far, that’s what Nelligan’s squad has done.