Maryland gymnastics prepares to open up three-meet week against Nebraska 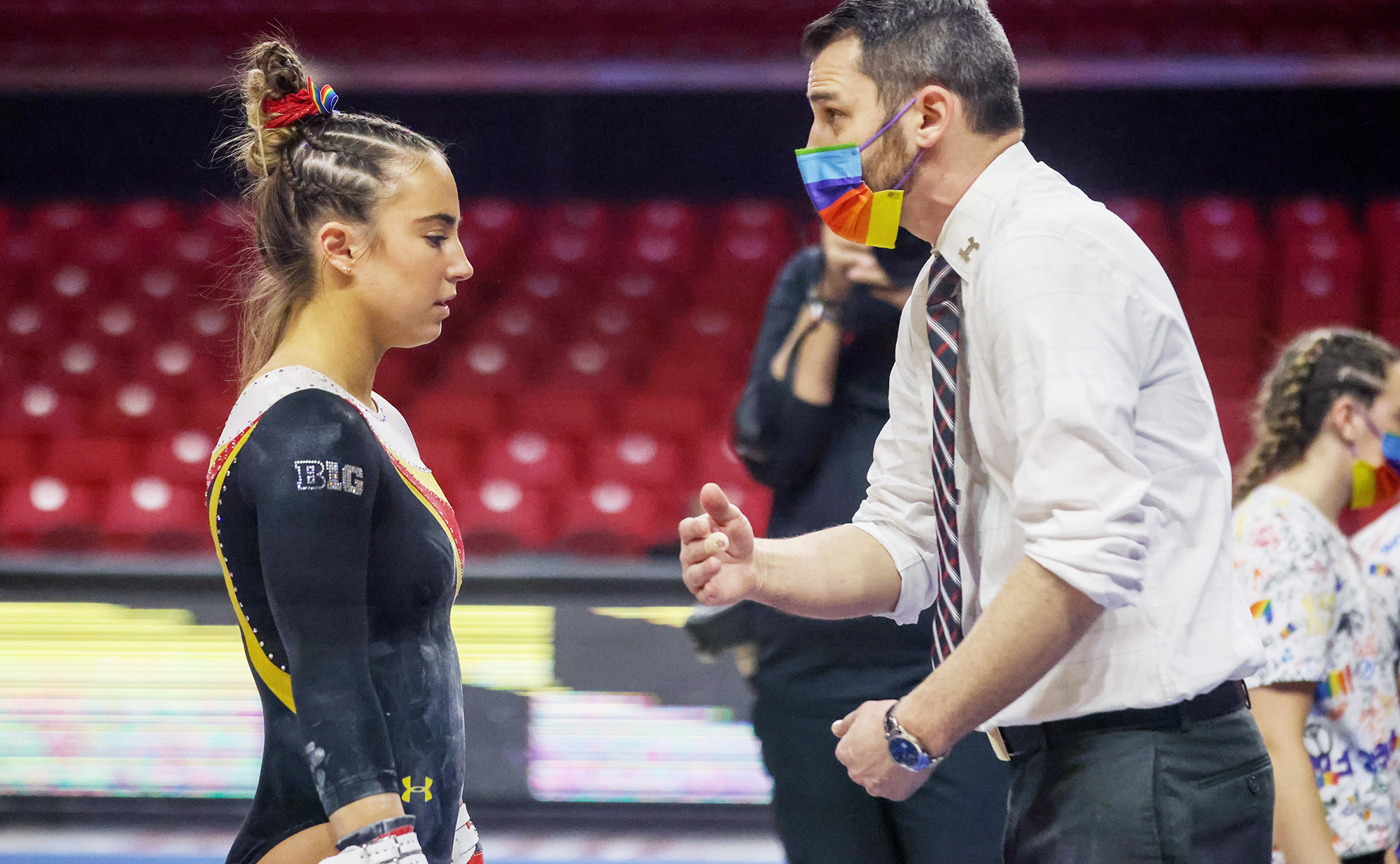 Coming off of its best performance of the season, Maryland gymnastics is entering a stretch of three meets in seven days. With little time for adjustment between each competition, the Terps were tasked with putting it all together for their next week ahead of Friday’s meet against Nebraska.

Following their matchup against the Cornhuskers, the Terps have Saturday off and a light walk-through Sunday in preparation for Monday’s competition with No. 6 Minnesota and Pittsburgh. Then, they’ll have Tuesday off, practice Wednesday and travel to Toledo, Ohio, on Thursday for the annual Big Five Meet.

Luckily for Maryland, its 195.950-point performance last week where the Terps scored season highs in each event doesn’t need as much addressing as their performances at the beginning of the season.

However, with a wavering injury situation, health may very well be the most important factor to the Terps’ success.

2021 All-Big Ten second-team selection Reese McClure made her return to beam Saturday against Michigan State, and said she is now pain-free on that event. More than anything, she’s excited to be back in competition following her December ankle sprain.

“I think from week to week, we’ve definitely gained a lot more confidence. We’re kind of settling into those calm, collected beam routines that we do all the time in the gym, so it feels great to step back into the lineup,” McClure said.

Beam has been the Terps’ most improved event, as following scores of 46.600 and 48.475, Maryland put up 49.000 in its most recent outing. McClure contributed 9.750 to that effort, a respectable score, but far less than the numbers she’s capable of putting up when at full strength.

With the Terps putting up a score of 49 on beam even without McClure at her peak, coach Brett Nelligan said they can count on those scores staying up in that range rather than what it was in the first two weeks, especially given what he sees from them every day in practice.

“Those [first two meets] were very uncharacteristic, that was just first meet and second meet jitters. But what you saw them do at Michigan State, that’s what we, as coaches see from them every day in the gym,” Nelligan said.

On top of McClure’s return to beam was Emma Silberman’s to the floor. Unlike McClure, Silberman had been competing all season but didn’t return to the floor until the meet against Michigan State following her ACL and meniscus tears last season.

Silberman was still shaking off rust, as she put up 8.850 in that event and lacked her typical rhythm, but a healthy version of Silberman could be a game changer for Maryland. The junior averaged nearly a full point higher, at 9.792 on floor last season.

[Maryland gymnasts Silberman, Tsiknias leaned on one another throughout injury rehab]

But aside from those who have returned, the Terps have several gymnasts still waiting to return from injury, and additionally have new injuries affecting their lineups as well.

Senior Sanya Glauber, who has a shared record of the program’s all-time bars score of 9.950, is coming back from elbow surgery over the summer. In the last six meets of the season, Glauber averaged 9.846 on bars.

Tayler Osterhout, who suffered a bone bruise following a short landing while warming up for the Terps’ season opener, is close to coming back, Nelligan said. Nelligan said he hopes to use her in an exhibition spot this weekend, whether it be Friday or Monday.

But on top of those awaiting return, an injury suffered in a practice last week impacts more than just a score, but the morale of the group as a whole.

On Wednesday, junior Sophia LeBlanc announced she ruptured her achilles via her Instagram and has already undergone surgery. Nelligan said the surgery was successful, but it’s a loss for the Terps that goes beyond the score sheet.

“When she got hurt, and went down, you can just feel it throughout the entire team, you feel that sadness in your stomach … She’s an inspiration to all of us,” Nelligan said. “She’s one of the toughest competitors, one of the hardest working athletes I’ve ever coached.”

LeBlanc competed in the Terps’ first two meets on floor, and had competed on bars, beam and floor throughout her first two years in College Park.

The Terps have momentum in their favor, but the flux of injuries make everything even more unpredictable.

Nelligan and the rest of the coaching staff are still working to find the best group to compete on floor, and that’s a puzzle that includes pieces like Silberman and McClure.

However, injuries have affected the Terps throughout the season. Now, they focus on being able to repeat and improve their performance from last week for Friday, and stay solid without significant time for adjustments throughout next week.