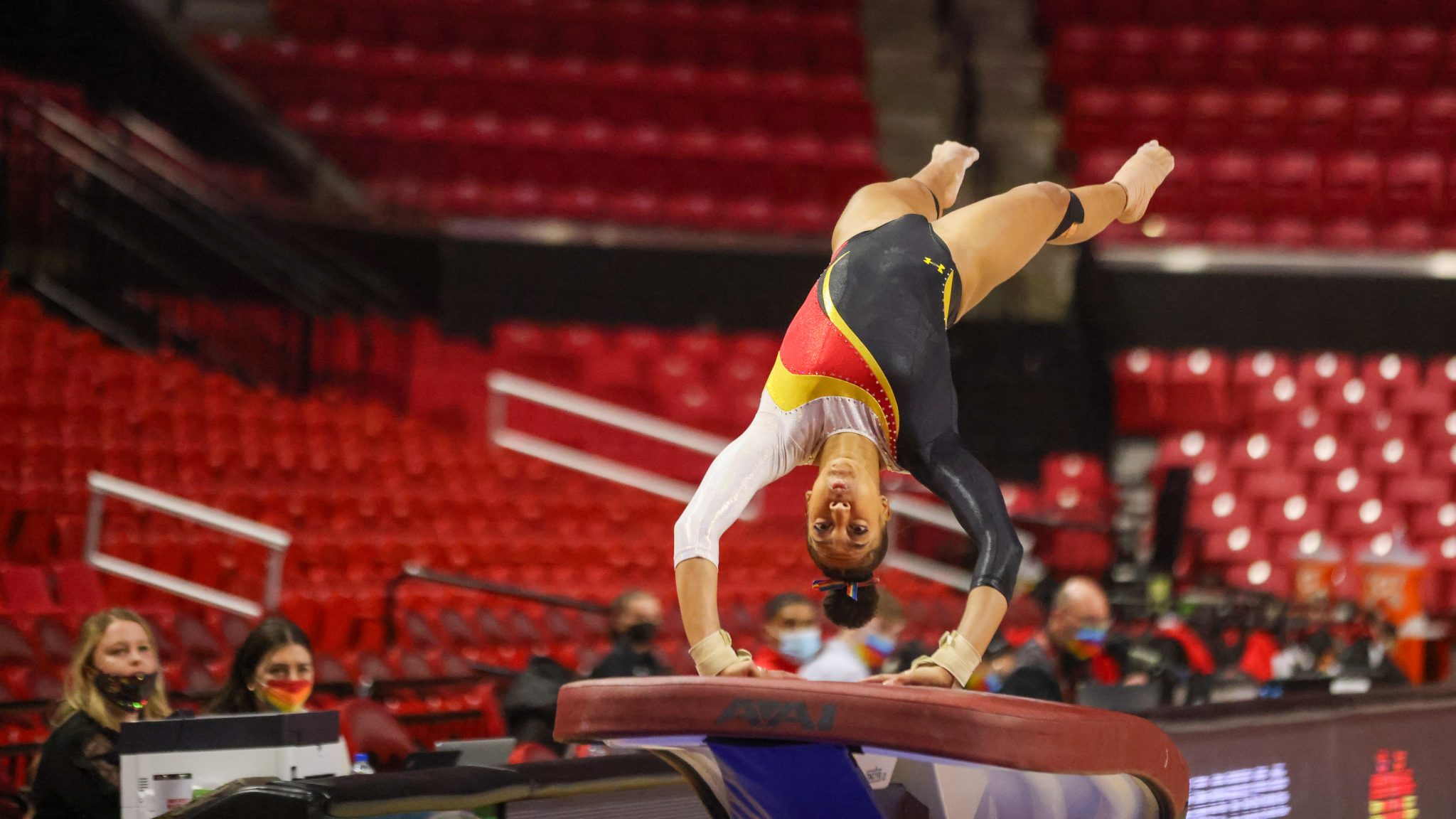 Maryland gymnastics put up its highest score in its last six meets on Saturday night in East Lansing. But, despite posting season-high event scores in all four rotations, the Terps ended up falling to No. 15 Michigan State, 196.875-195.950.

It was a well-rounded effort for Maryland, which had 12 scores above 9.800. Olivia Weir set a career-high score on beam with 9.850 and Elizabeth DeBarberie and Emma Silberman tied their personal bests with 9.825 on bars and with 9.850 on vault, respectively. Freshmen Athlyn Drage and Sierra Kondo posted season-and-career-bests on bars and Audrey Barber posted her highest All-Around score of the season.

Unfortunately for the Terps, though, Michigan State also had its highest-scoring meet of the season.

[Maryland gymnasts Silberman, Tsiknias leaned on one another throughout injury rehab]

The Spartans came into the meet scorching hot, putting up 196.775 against Michigan, and 196+’s in their two prior meets. Their score against the Wolverines was their second-highest of all-time, and they topped that against the Terps.

Although Maryland didn’t score as much as Michigan State, coach Brett Nelligan thinks this scoring is more reflective of the team he sees in practice each day — and his gymnasts agree.

Despite typically being run by the SEC, Big Ten gymnastics looks as strong as ever, meaning the Terps may be tasked with beating teams like the Spartans somewhat frequently.

Of the 10 programs in the conference with a women’s gymnastics team, seven rank in the nation’s top 30.

“The Big Ten, as a conference, is really on the rise. I feel like to beat anyone in this conference, you have to be at the top of your game,” Nelligan said.

While that may make winning harder, there’s no defense in gymnastics — ultimately, all the Terps can do is perform their best and hope they stack up well against their opponent.

Prior to the weekend, Maryland was ranked last in the conference, but its score today has the chance to catapult Nelligan’s squad up a few spots.

Additionally, the Terps have dealt with injuries to several key gymnasts, and still are piecing together the best possible lineups.

2021 All-Big Ten second-team selection Reese McClure made her season debut for the Terps after suffering a sprained ankle in December.

Scoring 9.750, McClure likely hoped for something higher. But the junior was given a large number of hugs and high-fives — even for Maryland’s standards.

On top of beam, McClure excelled on floor and vault last season, where she’ll continue working to recover from her injury to return to.

For Nelligan, though, having McClure is bigger than the numbers she puts up.

“Reese is a massive importance to us. Obviously gymnastically she brings incredible scoring, incredible confidence, but that voice as a leader, she’s a junior now, she’s vocal in the gym, she’s a really important piece to our leadership group,” Nelligan said in December immediately following McClure’s injury.

Due to its last meet against No. 5 Minnesota being canceled due to COVID-19 concerns within the Golden Gophers’ program, Maryland had two weeks in between its last meet and Friday’s contest against the Spartans. In the next two weeks, the Terps will have three meets, facing six Big Ten opponents in that span.

Nelligan said the extra time in between meets made things more difficult, as they had less to work off of and prepare from. Now, as the Terps enter a stretch where they have little time between meets, his squad may face challenges on the other end of the spectrum.

Regardless, the Terps are still getting into form. With the meet against Minnesota postponed, they’re three meets in while almost every other team has four or five to work with to find their identity.

That, coupled with McClure’s return, on top of junior Tayler Osterhout eying a comeback, indicate that the Terps are a team that’s putting all the puzzle pieces together to be at their best.

“I think what I’ve seen so far from the team is progress. . . I think every single time we got back in the gym, put our heads down and worked really hard to fine-tune our teams and our skills,” Barber said. “I think today, we were able to show it off.”