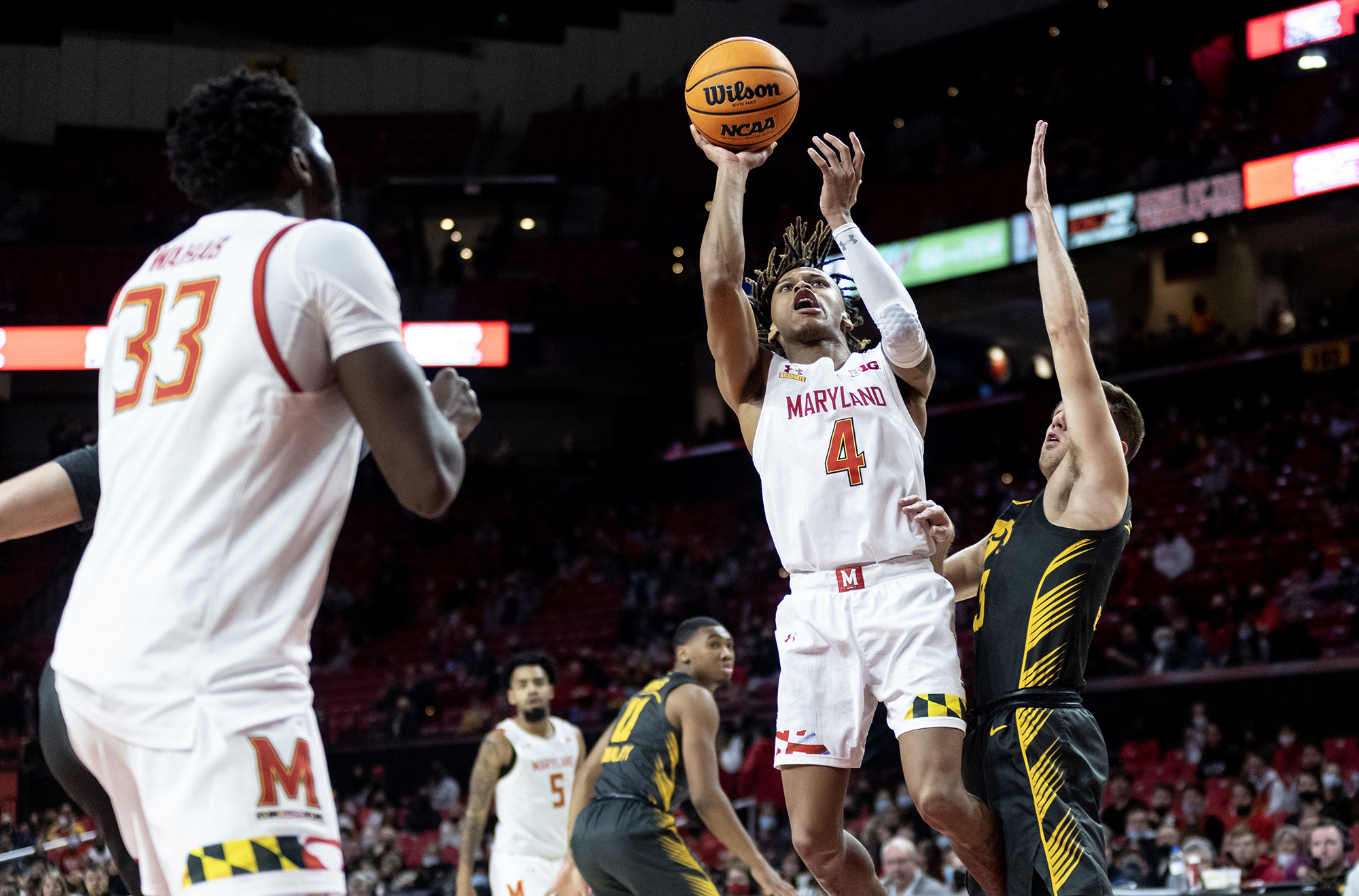 Maryland men’s basketball had a chance against No. 3 Purdue.

After keeping the game close throughout the first half, the Terps took a 12-point lead to open the second half, which they quickly squandered.

After a back-and-forth fight through the rest of the second half, Maryland found itself down one with seven seconds to play.

The Terps were going to inbound the ball under Purdue’s basket after a sloppy turnover by the Boilermakers.

Fatts Russell inbounded the ball to Donta Scott. Scott hesitated with the ball in his hands.

He raised his hands for the layup, but the ball was knocked away.

Mason Gillis covered the ball and snuffed out any chance that the Terps had to upset Purdue.

After Maryland put up a valiant effort against the Boilermakers for the majority of the game prior to their run, but the Terps fell, 62-61, in the waning seconds off a missed opportunity.

“I thought we did some things well enough to give us a chance to win,” interim head coach Danny Manning said. “I love the effort. I love the moxie. We didn’t get the outcome we wanted but that effort gave us a chance to compete with one of the better teams in the country.”

Caught up in the hubbub of Eric Ayala’s last-second absence due to a lingering wrist injury, the Terps had every reason to feel discouraged in front of No. 3 Purdue — especially in the presence of seven-foot-four Zach Edey, one of the largest players in college basketball.

But Fatts Russell didn’t show any fear from the jump.

A pair of threes established an 8-4 lead for Maryland as Russell sought to avoid Edey in the paint. With Ayala out, Maryland needed every point it could get from Russell.

“[Russell] was really big tonight, we didn’t have [Ayala],” Scott said. “He stepped up to the plate and took on the challenge and gave us what we needed on the offensive end.”

Russell’s marksmanship from the field was infectious. Donta Scott drained an unlikely shot with two Boilermakers draping off him. Russell finished with a team-high 24 points and Scott followed with 11.

Maryland kept it up from the field even as its starters filed off the floor. Purdue remained rather stagnant after it began today’s jaunt with a thunderous alley-oop to Edey.

That energy came and went. The Terps tested the Boilermakers as Russell continued his hot streak with a spectacular reverse layup off the fastbreak to make it 18-15 with 8:32 to go in the opening half.

“I knew [Ayala] wasn’t playing [so] I knew I had to be a little bit more aggressive and control the game,” Russell said. “I just didn’t do enough.”

Even as the half wound down and Maryland cooled to a three-point deficit at the half, it stayed optimistic against fierce Big Ten competition.

A 10-point run to start the second period gave no reason to think Maryland would slow down. The Terps shot out to a 12-point advantage over the Boilermakers thanks to contributions from Russell, Scott, Hakim Hart, Ian Martinez, Julian Reese and Qudus Wahab. Even with interim head coach Danny Manning’s squad’s bench contributing to the run, Purdue was still Purdue. Maryland was still Maryland.

The collapse was swift.

In just under three minutes, the Boilermakers stripped hope away from the Terps as they eviscerated a 12-point lead with stellar shooting from the perimeter. It looked as if the Boilermakers would take their momentum and run with it to finish out the game.

“It’s extremely hard to play in this building,” Russell said. “Once they make a shot, it feels like a six-point shot.”

But Maryland wasn’t quite ready to let go.

Hart finally broke a Purdue scoring run with a second-chance layup under the rim that shocked the Terps back to life. Score for score — the Terps kept up valiantly with the Boilermakers.

With one last shot with seconds to go, Maryland came up short. Falling to a juggernaut in third-ranked Purdue, the Terps would go home empty in the failed upset attempt.

The sting was worsened by a controversial no-call on Scott’s final layup that likely would’ve given the winning free throws.

“I just didn’t think they made the right call… and they should’ve,” Scott said. “At the end of the day, I can’t control that.”