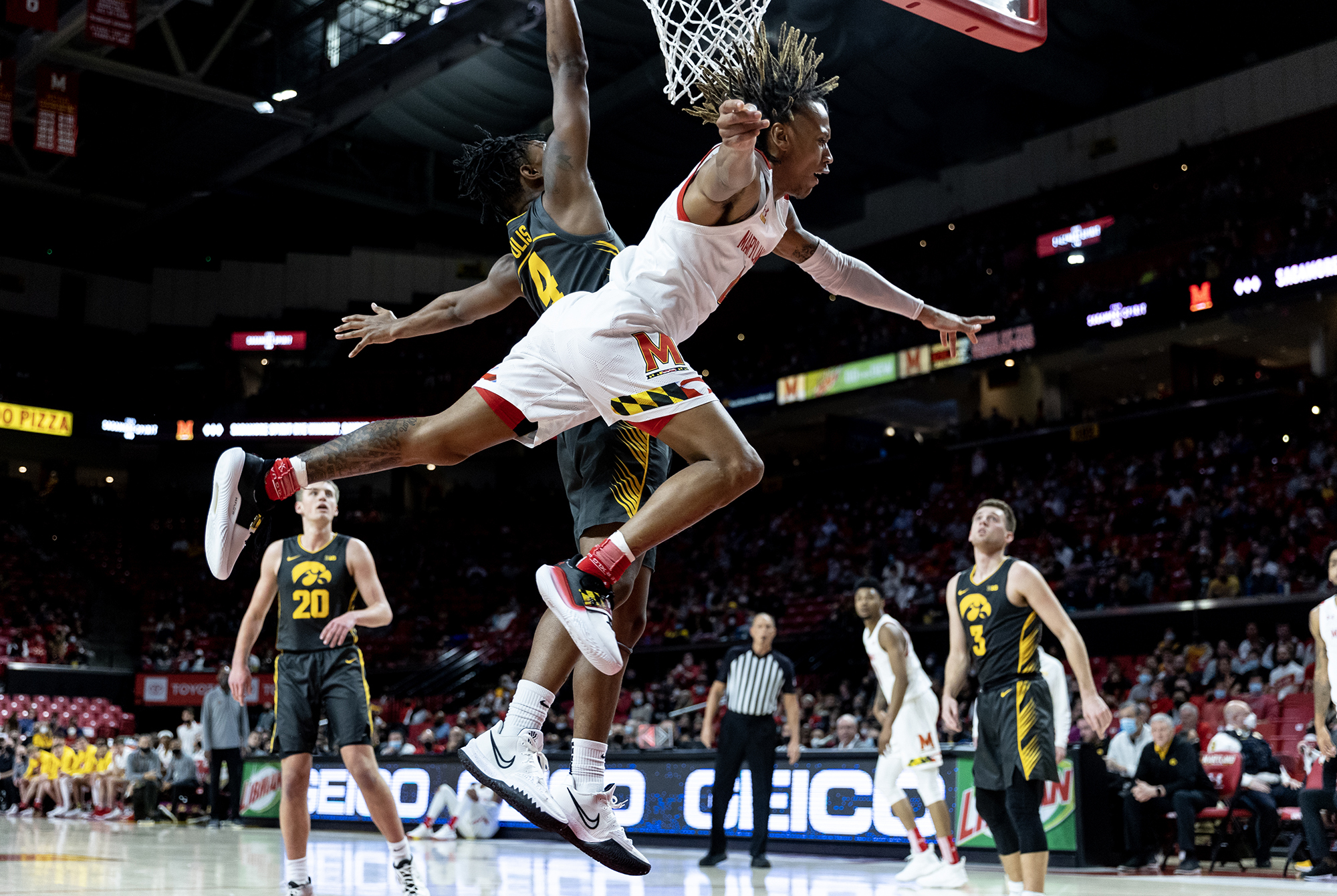 Maryland men’s basketball entered Thursday night’s showdown against Iowa seeking a victory to get them back to .500. A team that has struggled to gain its footing throughout a tumultuous season was able to produce on the offensive end with an efficient first half.

But they were no match for the unshakable force that was Jordan Bohannon.

Bohannon, one of the most prolific shooters in Big Ten history, was the main catalyst for the Hawkeyes’ offense, matching Maryland’s first-half total from three with six splashes of his own.

His three at the 12:37 mark bailed the Hawkeyes out of a phenomenal defensive sequence by the Terps. The extended possession — which lasted 47 seconds — ignited both the crowd and the five players on defense. But Bohannon’s left-wing shot silenced the Xfinity Center.

Bohannon struck again with 8:28 remaining after Ayala converted a tough driving layup off of an errant pass by Patrick McCaffery. This kicked off a 9-2 run that allowed the Hawkeyes to gain a considerable advantage over the Terps.

The sharpshooter stayed dialed in in the second half, ultimately finishing with 10 three-pointers. All-American Keegan Murray, who also scored 30 points, was a footnote to Bohannon’s superb night as the Terps collapsed in a big way, losing 110-87.

“When a team comes in your building and shoots 60 percent in both halves, you have to find a way to be a lot more disruptive defensively,” interim head coach Danny Manning said. “There were a couple times [with] Bohannon we didn’t get to quick enough [in transition].”

Despite the loss, the Terps were scorching hot from deep in the first half.

After cashing in on nine three-pointers in its Jan. 3 showdown in Iowa City, Maryland generated over half of that output before the midway point of the first half thanks to a perfect 5-for-5 start.

Donta Scott and Hakim Hart opened the scoring for the Terps with two of the five threes. Hart continued his productive start from deep right out of the first timeout before Eric Ayala and Xavier Green joined in on the bombardment.

Despite its perfect showing from three to kick off the game, Maryland struggled to defend Iowa’s half-court offense. According to KenPom, Iowa has the tenth most efficient offense in the country, and it showed against a susceptible Maryland defense.

As good as Iowa was at putting the ball in the basket, Maryland was able to produce one of its more impressive first-half outputs of the season on 56 percent shooting. Hart led the way with 13 points on 3-for-4 shooting from beyond the arc, with Fatts Russell assisting on two of Hart’s triples for a five-assist first half.

“I thought we were moving the ball pretty well,” Hart said.

The reason for the 16-point halftime deficit, however, was because of the additional opportunities Iowa’s offense received. Iowa attempted ten more shots than the Terps due to forcing two-thirds of Maryland’s nine turnovers and its plus-five offensive rebound margin.

Out of the intermission, the Hawkeyes stayed locked in. Murray and Bohannon hit back-to-back threes to push the lead to 20.

[Maryland men’s basketball was stymied by an unflinching Ohio State]

Twenty soon became 30 as the Terps gave up 18 consecutive points across just over six minutes. By the time Simon Wright ended the run via a tip-in, the teams had trended in polar opposite directions. Maryland shot 16.7 percent from the field compared to Iowa’s 80 percent clip.

In garbage time, Russell made three consecutive threes before coming out of the game for Aidan McCool with 5:06 remaining. Ian Martinez then added two of his own down the stretch as the Terps slightly closed the gap.

Two McCool free throws caused the remaining fans to erupt, but by the time the final buzzer sounded, Maryland had yielded 110 points.

“We got a couple more games left and we’re gonna keep fighting,” Russell said. “We gotta turn this thing around.”

This marked the first time Maryland had allowed 100 points since Feb. 27, 2010, in a road win against Virginia Tech. The last time they gave up 100 points in a loss was Feb. 3, 2009, in Chapel Hill against North Carolina.

Up next is another tough opponent in Purdue, but Manning is optimistic for Sunday’s road test.

“Can’t feel sorry for ourselves, we got to pick ourselves up,” Manning said. “That’s a great thing about this league you get another opportunity, night in and night out, to get a quality win.”