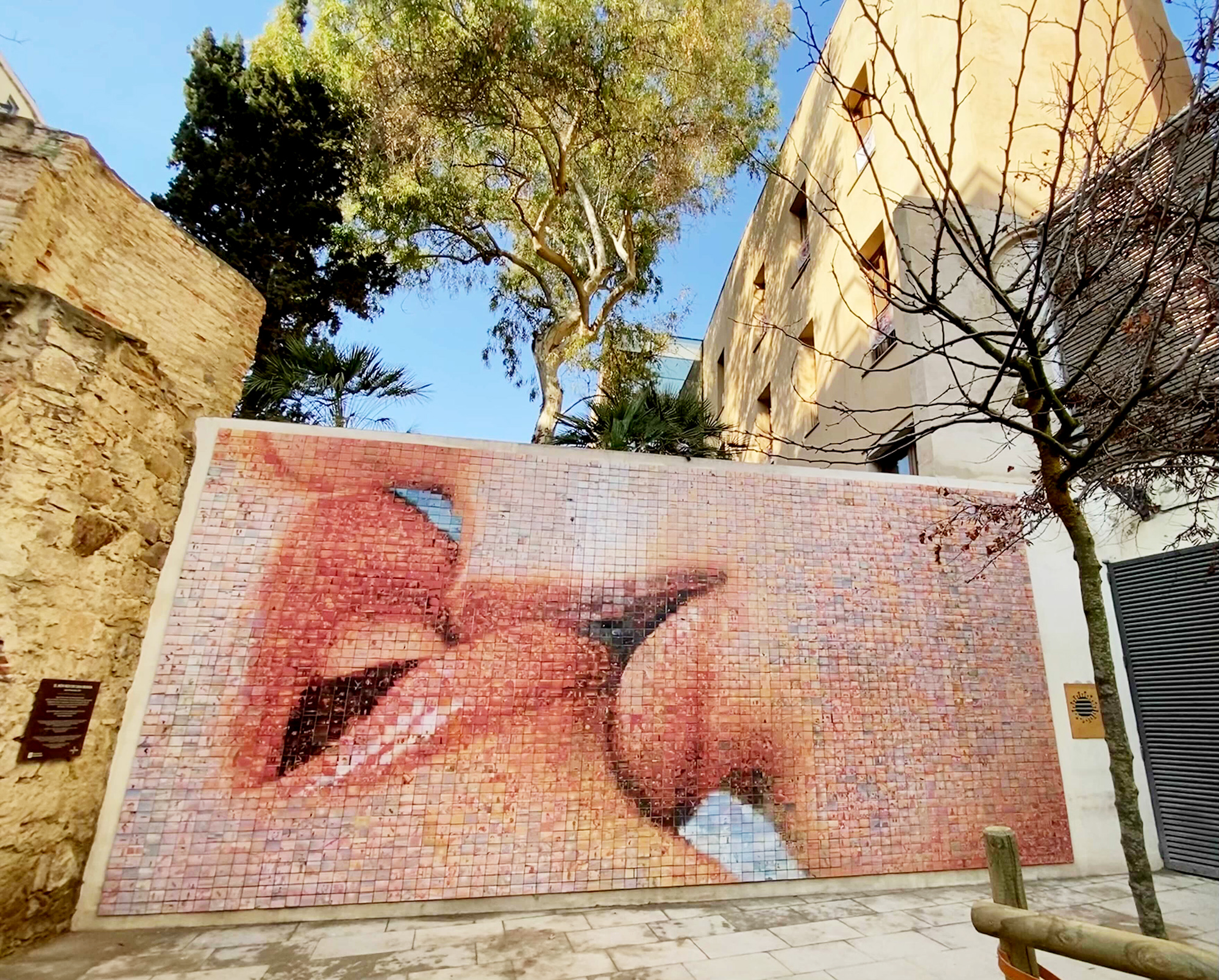 “The World Begins with Every Kiss” is a Barcelona photomosaic by Joan Fontcuberta. (Winter Hawk/For The Diamondback)

Obscure to many tourists, but symbolic of both the city and its people, public art is never far in the highly decorated cosmopolitan city of Barcelona, Spain.

While many travel websites point visitors to eccentric public art installations such as “Barcelona Head,” an almost impossible-to-miss pop-art style sculpture standing at the waterfront of the city’s center, there are plenty of hidden gems scattered throughout the city that are much more symbolic of the city’s history and community.

One of my favorites in particular is a well-concealed photomosaic located within the heavily traveled gothic quarter streets. Adjacent to the Cathedral of Barcelona, in the Plaça d’Isidre Nonell, the “The World Begins with Every Kiss” photomosaic by Joan Fontcuberta compiles thousands of miniature ceramic tiles of Barcelona natives and transforms it into a large scale expression of freedom.

When approaching the mosaic, the obvious image is a sensual, dreamlike kiss shared between two individuals. The lips in the photomosaic meet, but the kiss isn’t complete, leaving passersby in an infinite state of suspense as one can only wish for the passionate lips to close in on one another.

Glorious in its perfectly matched color composition, the lips glisten as the sun shines through the buildings surrounding it and down into the dead-end street where the piece stands.

Individual tiles are printed with a photo of people and places that capture a moment that in some way represents a feeling of freedom.

Unveiled in 2014, the photomosaic commemorates the city’s defeat in the War of Spanish Succession, according to the Town Hall of Barcelona’s website. The artist aimed to uplift residents while honoring the city, rather than present a reminder of the region’s defeat.

“I wanted to get away from a wailing wall, I didn’t want people to come and feel sorry for themselves in front of a wall,” Fontcuberta explained to the city. “What I wanted was a wall of joy, where people see optimistic proposals for a future worth living for.”

The Catalan photographer asked readers of El Periódico newspaper to send him photographs of their moments of freedom, according to the website. Arranging the 4,000 tiles by color and density, the 26-foot-wide kiss is a symbol of affection and liberty.

Another tucked-away public art installation that visitors wouldn’t expect to stumble upon is “Carmela.” Bolted into a round cement bench in the Plaça Luis Millet, the three-dimensional sculpture resembles a Barcelona teenager, according to Barcelona Lowdown.

Artist Jaume Plensa scanned the young girl’s photo to create a 3D image, which he then compressed and cast in iron to create a flattened sculpture, the website stated. However, from the right angle, it still looks like a large 3D bust.

While it’s literally representative of one of the city’s natives, the sculpture is also symbolic of the tranquility present throughout the busy city. Situated just half a block away from the buzzing four lane street Via Laietana, “Carmela” allows those who enter the small plaza to escape the cosmopolitan reality that lies behind the three large buildings surrounding it.

The last stowed-away public art piece worth making time to see is Keith Haring’s “Together we can stop AIDS” mural. Cast against a cement wall in a public square in the Raval, right next to the Barcelona Museum of Contemporary Art, the mural depicts a syringe being strangled by a large snake with the word “AIDS” written below it.

[The Diamond Drag: Episode 5, Save a Queen, of ‘RuPaul’s Drag Race’]

Scissors cut the snake in half, and one figure puts a condom on the creature’s tail. The wide mural is set in one color: red, symbolizing blood, according to the museum’s website. Haring inscribes the words “Todos juntos podemos parar el SIDA” (Together We Can Stop AIDS) at the far right end of the wall.

Haring selected this neighborhood, which was at the time referred to as the Barrio Chino, because it reminded him of the marginal neighborhoods in New York where he began to paint, the website stated. The wall he chose for the mural was littered with syringes, making it the perfect place to send a meaningful message.

Whether walking through the lively streets in the city’s center, or wandering down quiet neighborhood alleys, travelers don’t need to visit a gallery to enjoy quality and thought-provoking art. Behind each sculpture, tile or patch of spray paint is a deeper look inside Barcelona’s history and the people who have carried the city’s culture into the present.