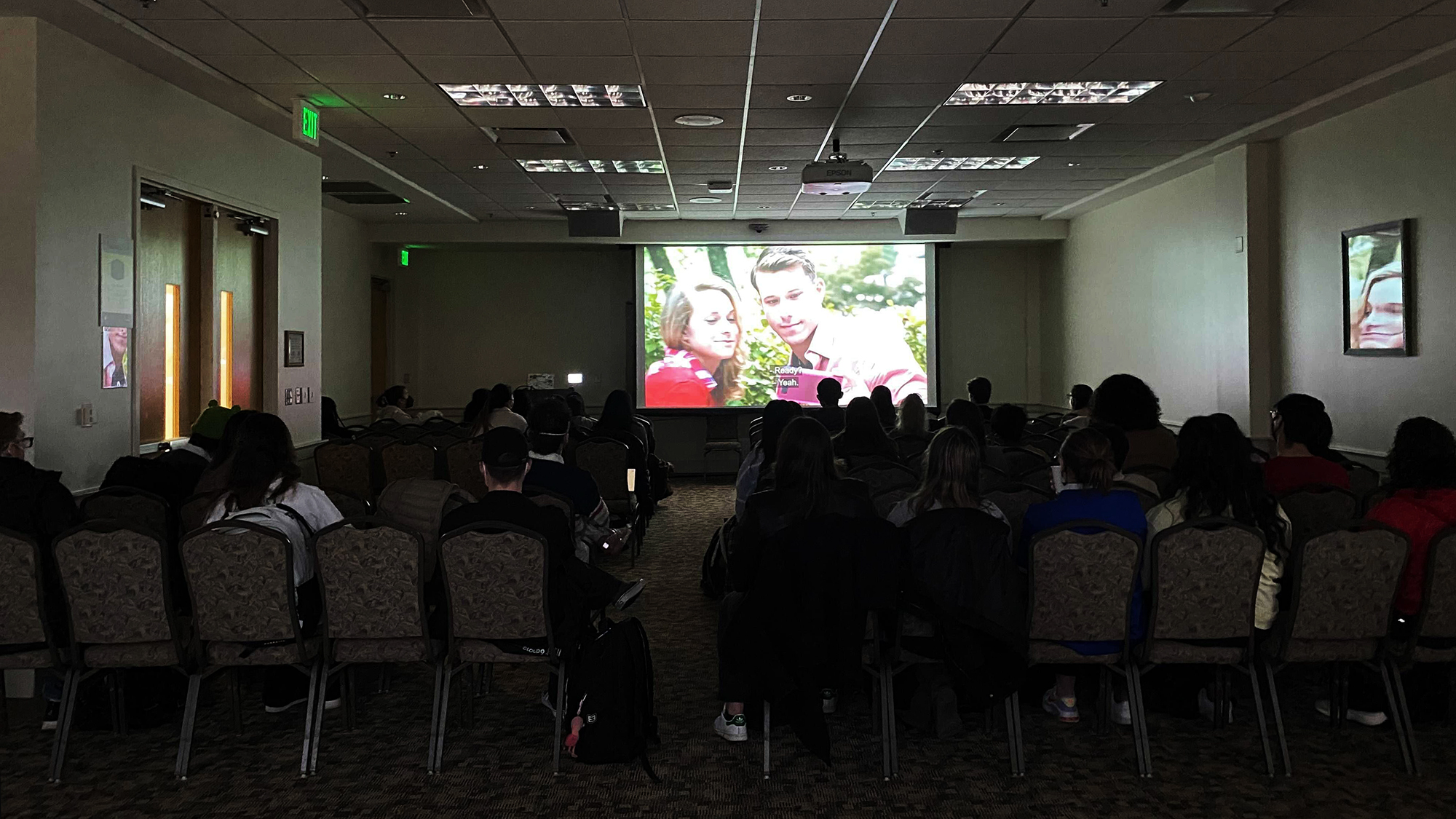 Over 35 people gathered on Feb. 7, 2022 for One Love’s “Escalation” training on intimate partner violence. (Trisha Ahmed/For The Diamondback)

SGA, GSG and One Love UM hosted a workshop Monday for their members to learn about intimate partner violence. More than 35 people attended the in-person event in the Juan Ramon Jimenez Room at Stamp Student Union.

The workshop featured a 40-minute screening of the film Escalation from One Love — an organization that educates people about healthy and unhealthy relationships — followed by a discussion of the film and available relevant resources.

The film portrayed an example of an “unhealthy relationship and how it gradually got worse,” said Josie Urrea, who helped organize the event. Urrea, a junior Chinese and public policy major, serves as the Student Government Association’s director of sexual misconduct prevention. The workshop’s speakers — students from this university’s chapter of One Love — said one in three women, one in three men and one in two transgender and nonbinary people will be in an abusive relationship during their lifetime.

This university’s students filed 213 reports of sexual misconduct in the 2019-20 academic year, according to the most recent report from this university’s Office of Civil Rights and Sexual Misconduct and The Diamondback’s reporting in November.

Event organizer Autumn Perkey said her biggest hope is the workshop will open up communication about the issue and that people will start talking about it more. Perkey, a government and politics doctoral student, serves as the Graduate Student Government’s vice president of legislative affairs.

“The best way to deter domestic violence is to be educated about it. So this was a way to kind of get more education out there to hopefully help people avoid these situations,” said Perkey.

Perkey said she is a survivor of domestic violence and is now an advocate.

“During the COVID-19 pandemic, you saw an increase in domestic violence and a reduction in resources,” Perkey said. “[People] were trapped at home with their abusers, and they couldn’t escape.”

The training brought awareness to SGA and GSG members about the people they represent on campus and how prevalent these situations are for this university’s students, said Urrea . “We need to be cognizant of that when we do our work,” she added.

Meghana Kotraiah, SGA’s speaker of the legislature, said the workshop had a great discussion on the heavy subject material.

A point from the group discussion that stuck with Kotraiah was the harm inflicted when friends and family say only positive things about a new relationship — if something goes wrong later, the victim might feel shameful and unable to talk about the problem.

“It was definitely an important training to do,” said Kotraiah, a sophomore agricultural and resource economics and government and politics major.

For example, Allard said, many graduate students live with their significant others, are married or  engaged, are economically dependent on their partners, have children or are isolated from others — all factors that can make a domestically violent situation challenging to leave.

“Were there three people that I could have relied on when I first came here, where I would have felt comfortable telling them that the situation was going on or that they would even see the signs? Probably not,” Allard said.

Perkey, one of the event’s organizers, said, “I think graduate students have experienced more trauma than they like to talk about.”

“And I think we’re at this generational divide, where the people who are current graduate students weren’t allowed to speak about their traumas, versus the undergrads (who) are vocal about it,” Perkey said. “So I’m hoping that we start talking more and people start getting more support in ways like accessing therapy.”

The workshop’s speakers shared some of this university’s resources to help with intimate partner violence including CARE to Stop Violence, the UMD Counseling Center, Behavioral Health Services, UMD Help Center and Lean On Me.

The above organizations offer services like free therapy, medication management, an anonymous crisis hotline and a non-crisis text line.