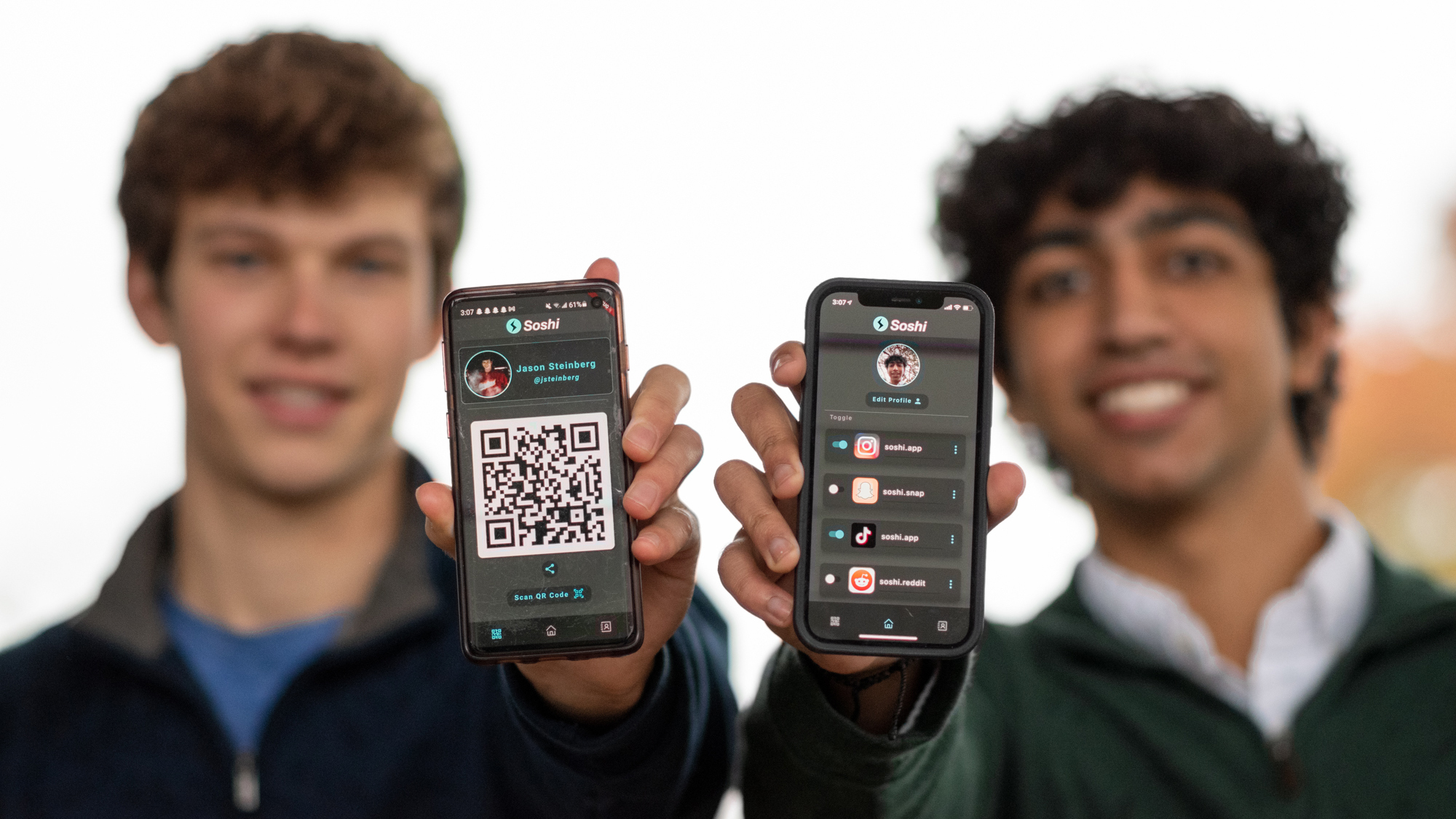 Jason Steinberg and Yuvan Sundrani, two of the three students behind the Soshi app, pose for a portrait outside of the Brendan Iribe Center for Computer Science and Engineering on Nov. 2, 2021. The Soshi app is designed to make sharing contact information and social media profiles easier with a QR code. (Autumn Hengen/The Diamondback)

University of Maryland students launched the full version of Soshi, an app where people can store social media profiles and contact information in one place and share with a QR code in order to facilitate networking, on Jan. 30.

The app’s beta version, which included platforms such as Instagram, Snapchat, TikTok, Twitter, LinkedIn and phone number, launched in November. The full version includes some new platforms such as Spotify and email.

Users could send feedback to the team by tapping a button at the top right of the screen, Steinberg said.

“So many people just bombarded us with feedback, so we had a ton of stuff to go on when implementing the full version,” Steinberg said. “We’re really excited about this.”

The team also added a new feature to increase user interactivity. Each person has a unique QR code that, when scanned, allows others to view their Soshi contact card. Users may then tap a button to directly add a person to their device’s contacts.

“Whenever you share your Soshi contact card with anyone, you have the option to put a bio in,” Sundrani said. “That’s a way of sharing more information about each user.”

The team worked on adding features to make the app more user friendly. For example, the app includes toggle switches that allow people to select which platforms they want to share with others. Some users left feedback asking what the switches do, so the developers added a pop-up to explain, Steinberg said.

“A whole lot of the feedback was just people saying, ‘Hey, this isn’t really clear. What does this switch do?’ They’re referring to those toggle switches that let you turn your platforms on and off,” Steinberg said.

Some of the app’s changes were more minor. At first, when users clicked the gray “register” button it would stay the same color, leaving users unsure if they clicked it, Jagtap said. In the new update, the color of the button changes after getting pressed.

The app specifically targets college students, since they’re constantly meeting new people, Kanipakala said. As a result, a lot of the marketing takes place in a campus environment.

The developers have been promoting the app to different audiences through their friends. Sundrani said a lot of his computer science friends have asked him and Steinberg about the coding behind the app, especially because neither of them knew the coding language before.

[This chatbot from UMD professors will answer questions about maternal, infant health]

Jagtap, on the other hand, has a slightly different experience.

“My friends are more oriented [toward] the social aspect,” Jagtap said. “A lot of the business degree is actually networking and speaking to professionals, speaking to anybody, so I feel like it’s a super useful tool to connect with somebody that you normally wouldn’t have time to meet with in the day.”

Evan Frulla, who graduated from George Mason University with a bachelor’s degree in criminology, works in federal contracting. As an executive assistant, he frequently meets with different people.

He said he uses Soshi on a weekly basis, and he’s working on getting his team on board with it as well.

“Whenever I go to meetings … if I need to share my contact information … I’ll utilize Soshi to streamline the process,” Frulla said. “I usually do highlight and advertise a little bit because I am impressed with it.”

In the future, the group plans to collaborate with other student-run companies to promote their creations.

CLARIFICATION: This story has been updated to include more context on the function of the Soshi contact card.