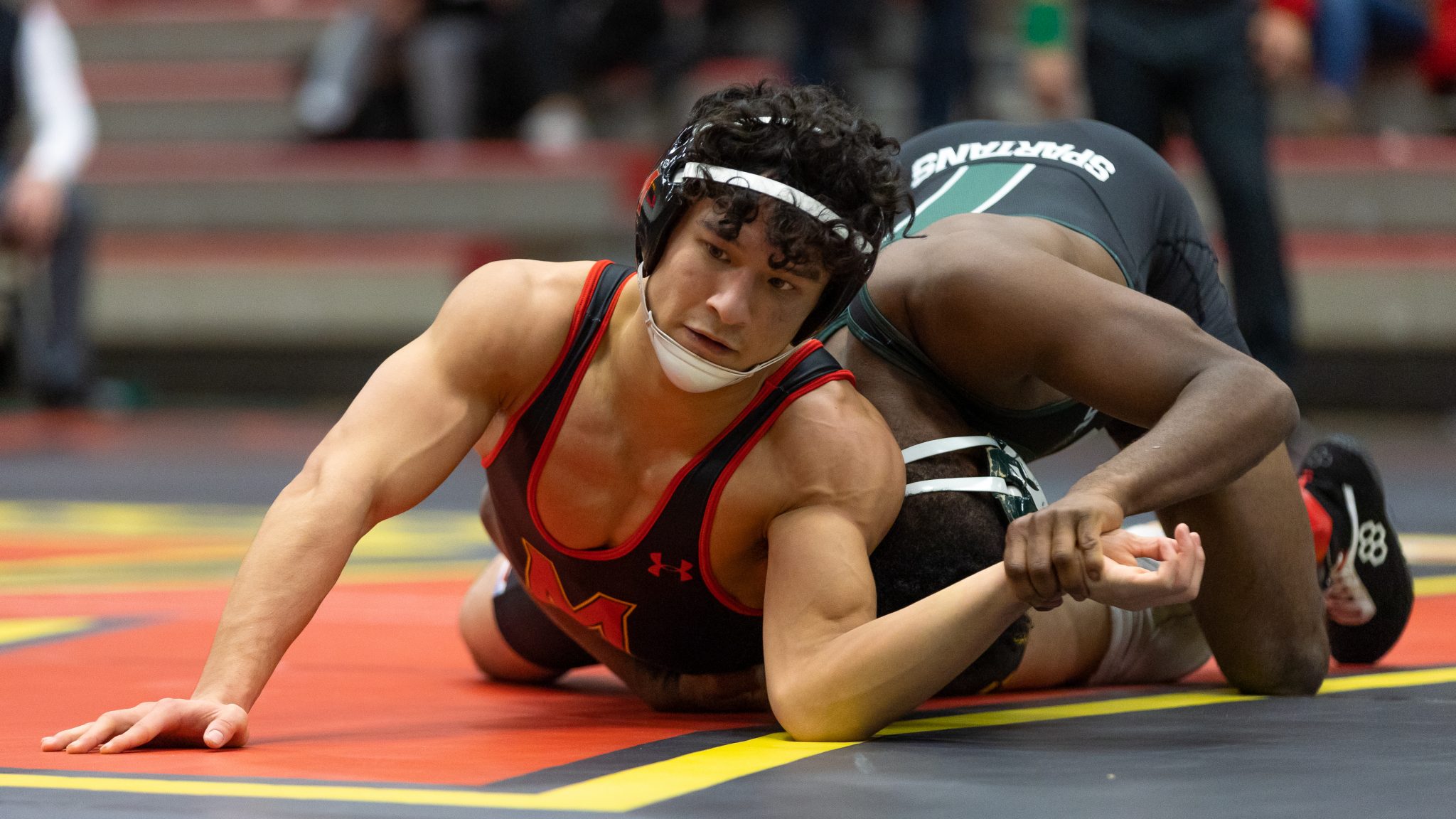 It was a tale of two halves for Maryland wrestling against Northwestern.

Despite the Terps’ duo of Dominic Solis and No. 13 Kyle Cochran both having standout performances in their wins, it was too late as Maryland was unable to fend off a slow start in a 29-7 loss to the Wildcats. With the defeat, the Terps fell to 5-11 on the season and extended their losing skid to eight duals.

“We got exposed a little bit I felt like,” coach Alex Clemsen said.

Dominic Solis got Maryland’s first lead in a bout with a takedown on No. 28 Troy Fisher. Solis used another takedown to take a 4-2 lead and used an escape to get a 5-3 lead. From there, Solis held off all of Fisher’s attempts to get the Terps on the board. In his return from a knee injury, Solis went 2-0 on the weekend.

“I just wrestled in my positions and I wrestled a complete match,” Solis said.

No. 13 Kyle Cochran snapped his four-dual losing streak with a 12-3 major decision win over Jon Halvorsen. Cochran got two early takedowns and from there went to work on defense, accounting for over three minutes of riding time to get back on track in his quest for a postseason run in March.

“[Cochran] dominated his positions,” Clemsen said. “He came out and really just set the tone and got to it.”

Outside of Solis and Cochran’s victories, the day was a frustrating one for the Terps.

At 125, No. 12 Michael DeAugustino racked over four minutes of riding time and used a takedown to dominate Tommy Capul and win by tech fall.

No. 9 Chris Cannon got an early takedown on King Sandoval, and in the third period, Sandoval went for a cement mixer. However, Cannon countered with a reversal to secure the 6-0 decision win. Sandoval’s offensive slump continued, having totaled only one total point in his last four bouts.

After Frankie Tal-Shahar beat Danny Bertoni by decision, 6-1, Maryland found itself struggling to mount any offense down 11-0 after three bouts.

With Conner Decker losing by major decision to Trevor Chumbley, 10-2, Maryland hit intermission down 18-0. The Terps failed to record an offensive point and gave up the riding time point in every bout in the first half.

“We got ridden too many times,” Clemsen said. “We got to do a better job on bottom.”

It wasn’t until Gaven Bell’s late takedown against David Ferrante that Maryland finally got  offensive points. But it didn’t matter, as the Terps went down 21-0 ending any chance at getting a win on the afternoon.

After the wins at 174 and 184 even the two wrestlers in the back end of their lineup at 197 and heavyweight struggled to muster offensive rhythm.

Andrew Davison was able to contain No. 28 Jaron Smith on the mat for a 4-1 decision win to have Smith go 0-2 on the weekend after his top-10 upset against Michigan.

“[Smith] seemed to be a little flat today,” Clemsen said.

Zach Schrader’s slump continued, losing to No. 10 Lucas Davison by tech fall to extend his losing streak to eight duals.

A common theme for Maryland throughout its Big Ten schedule so far has been the Terps’ inability to piece together a complete team match despite impressive individual performances.

After a stale afternoon that will leave a bad taste in their mouth going back to College Park, the Terps will have one last chance this season to pick up their first Big Ten conference win since 2016 on Saturday against Rutgers.