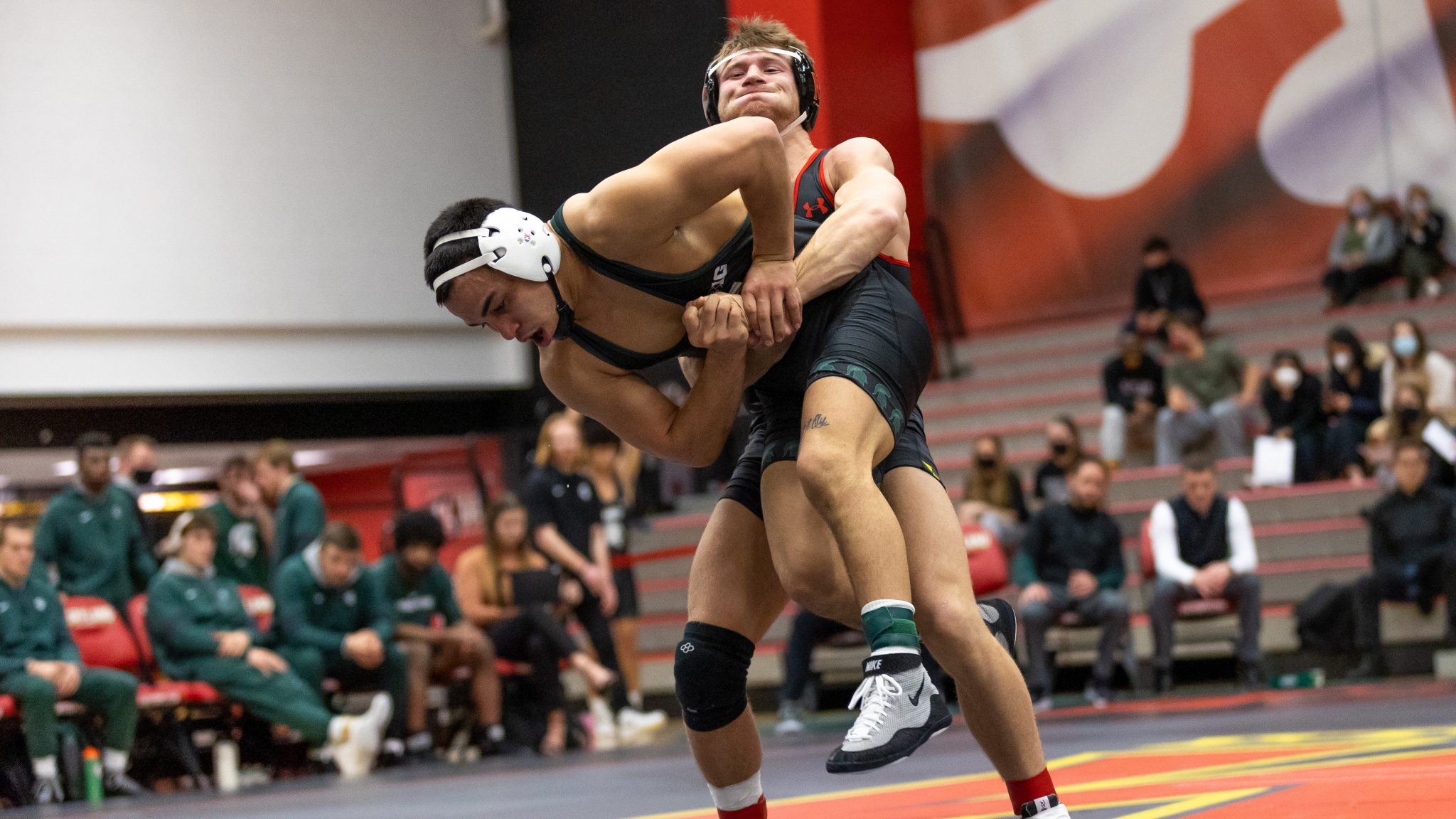 Michael North threw Peyton Omania onto the mat for a takedown to take a 10-2 lead that got the Xfinity Pavilion cheering and drew a fist pump from Maryland wrestling captain Kyle Cochran.

His fellow captain — North — continued his recent momentum with an 11-5 decision win over Omania as he continues a surge toward the Big Ten tournament in March.

It was a good moment for North in his comeback from a broken ankle in August. But despite that individual performance from him and a strong showing from Dominic Solis, Maryland still fell to Michigan State, 29-6, to continue its losing streak.

“When the battles got deep and long at a couple points we didn’t fight through well enough and they did,” coach Alex Clemsen said. “Bottom line I think that was the difference.”

North used multiple takedowns and riding time to be one step ahead of Omania at every turn — though he missed a chance at a major decision at the end — once again showing improvement.

“North is an incredibly talented wrestler,” Solis said. “It’s great to see him get the success that he deserves because he does put in the work.”

The other standout performance for the Terps after a loss at 165 was Solis in his return to the lineup from a knee injury. It was a Southern Scuffle rematch for Solis and he beat Nate Jimenez by decision, 6-1, for a second time this season.

Solis fought off a takedown attempt by Jimenez and locked on his ankle to stay in bounds, getting his own takedown to take an early lead. Just as time expired in the first period Solis slammed Jimenez down to the mat for his second takedown of the bout to take a 4-1 lead and cruised the rest of the way for a win.

“I think I wrestled really well on top,” Solis said.

But Maryland blew some scoring chances that could have made the dual a lot closer.

No. 13 Cochran and No. 23 Layne Malczewski found themselves in a defensive battle with both wrestlers looking for control in the first two periods.

Despite Cochran getting a key reversal late to take a 2-1 lead, Malczewski used an escape and his riding time from the top position to get the 3-2 decision win

With that loss, Cochran now has a four-dual losing streak and will look to rebound on Sunday.

“[Cochran] needed to push the pace more early in the match,” Clemsen said.

No. 28 Jaron Smith slammed No. 8 Cam Caffey to the ground for an opening takedown to once again take an early lead over a top-10 opponent.

It was a dominant first period for Smith that saw him get two minutes in riding time. From there, Caffey took over as Smith started to show fatigue. Caffey finally took advantage with a near fall that gave him two points which were enough to ice a 5-3 decision win.

Still, Smith looked impressive against another top-10 ranked opponent, which could do dividends for him come March in a potential rematch.

“I think [Smith] is a nightmare,” Clemsen said. “I wouldn’t want to wrestle him.”

At 141, Matt Santos and Danny Bertoni needed sudden victory to decide their bout tied at two. Santos went on the attack early and spun Bertoni around his waist to throw him onto the mat to get the winning takedown.

With that loss, Bertoni is now 1-3 in sudden victories on the season, missing a chance at putting early points on the board.

Zach Schrader also went to sudden victory against Brad Wilton and the Pavillion thought Schrader got the winning takedown to snap his six-dual losing streak. But the referee didn’t signal for one and instead signaled for two points for Wilton. Schrader lost, 3-1, and continued his poor form.

Between Cochran, Smith, Bertoni and Schrader, Maryland missed out on some chances to pick up some crucial points.

The rest of the Terps’ lineup did not fair much better.

Tristan Lujan used four takedowns and a near fall on Tommy Capul to win by major decision, 16-3. And once again, the Terps gave up bonus points at 125.

No. 11 Rayvon Foley showed off both his offense and defense against King Sandoval, keeping the explosive wrestler on the mat with over four minutes of riding time accounted for to win by major decision, 9-0.

Sandoval’s offense has disappeared in his last three total bouts, only accounting for one total point.

The momentum from North’s win was brief as the Spartans answered. Lucas Cordio got an early 2-0 lead over No. 17 Chase Saldate with a takedown. However, that lead was a quick one as Saldate caught Cordio making a mistake and took him down on the mat, and finished off the fall.

Even though North and Solis looked good Maryland once again couldn’t put together the team performance needed to pick up their first Big Ten win since 2016 and snap its now seven-dual losing streak.

“We’ve got to continue to work hard and try to tighten some things up,” Clemsen said.