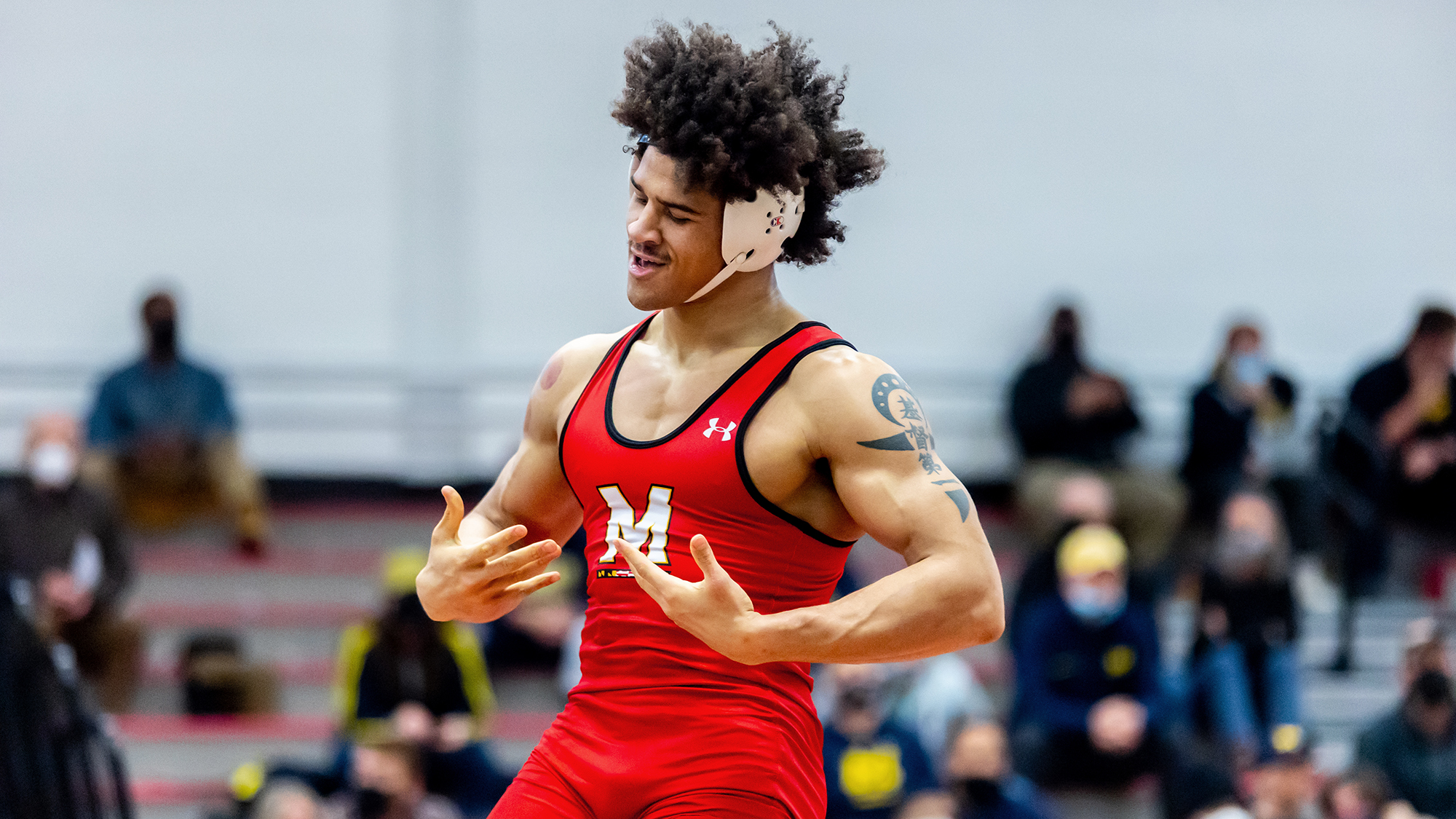 No. 32 Jaron Smith celebrates after his upset of No. 6 Patrick Brucki during Maryland wrestling's 40-2 loss to No. 4 Michigan. (Julia Nikhinson/The Diamondback)

Wrestling in the Big Ten can be challenging.

Maryland wrestling faced two ranked teams — No. 10 Wisconsin and No. 4 Michigan — over the weekend, and the challenge was evident. The Terps lost 39-4 to the Badgers and 40-2 to the Wolverines.

But with the blowouts came two bright spots. No. 32 Jaron Smith and Michael North put up standout performances.

Smith returned to the lineup this weekend after missing two duals because of health and safety protocols.

He lost to No. 22 Braxton Amos by a 7-2 decision Friday, but Smith rebounded to pick up an upset comeback victory for his biggest win of his season against No. 6 Patrick Brucki, a NCAA All-American.

Smith has wrestled his fair share of ranked opponents this season. He’s 0-2 against No. 12 Tanner Sloan, and he lost to No. 14 Jake Woodley and No. 8 Nino Bonaccorsi. But Smith has wins over No. 23 Owen Pentz and is 1-1 against No. 27 Jake Koser.

Even when the team score was 35-0 in favor of Michigan and the dual was lost, Smith kept fighting. His comeback win over Brucki will be the standout win on his resume in his quest to make the NCAA tournament for the first time in his collegiate career.

Even with the big win and a move to 15-7 this season, Smith isn’t dwelling on the upset. He’s focused on the future and his many opportunities to bolster his record before the Big Ten tournament.

“I don’t really think about big wins until after they happen,” Smith said. “No win bigger than the one right in front of you.”

The Terp captain picked up a 10-2 major decision victory over Wisconsin’s Aidan Medora after controlling the bout throughout.

On Sunday, North barely lost a tight bout to Pat Nolan. North fell by decision because of riding time going against him. But he fought back in the third period to tie up with a late takedown despite the loss.

This season has been tough on North as he missed some time at the beginning of the season because of a broken ankle in August. He didn’t return to the lineup until the tri-meet against Drexel and Duke.

Since then, North has been working on shaking off rust and getting himself to where he needs to be — this past weekend was another step in the right direction.

With his record at 3-11, North can use the rest of the season to continue working on his wrestling to be ready for the Big Ten tournament and peak when it matters most.

“It’ll take some time,” Clemsen said. “We’ll keep plugging — he’s a tough kid … and [North is] gonna be a hard out at the Big Ten [championship].”

Outside of their shutout loss to No. 1 Penn State, the Terps have scratched and crawled to some individual victories against ranked teams in a display of progress.

Clemsen has often preached he doesn’t believe in moral victories. But wrestling in the Big Ten can be a war. Even with the dual losses, Maryland may have won some small battles that could benefit it come March, when they matter most.

“We’re working towards March,” North said. “That’s the end goal [to] get some big wins at the Big Ten tournament and then keep it rolling until NCAA’s.”