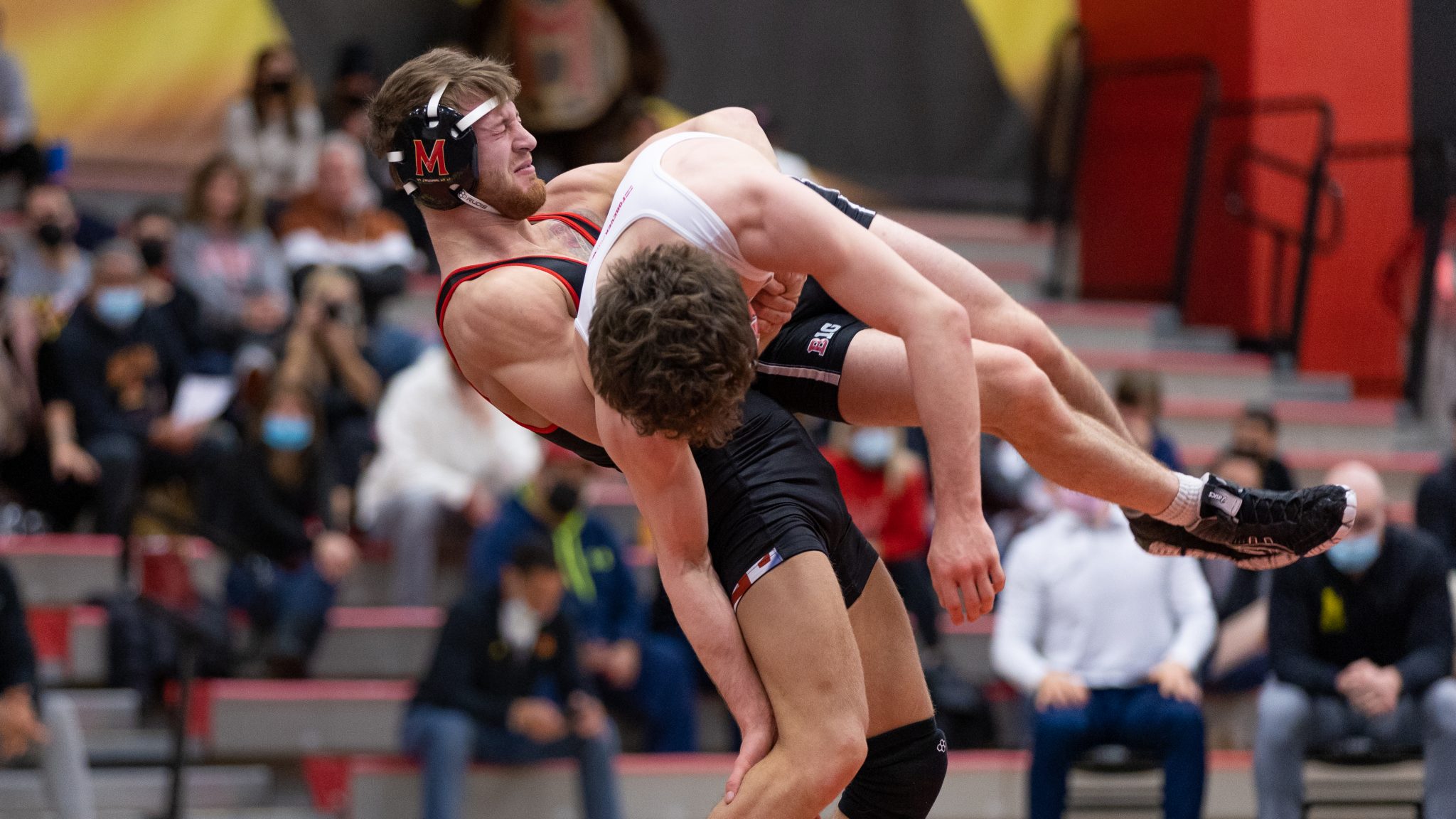 When Maryland’s best wrestler — No. 11 Kyle Cochran — stepped onto the mat against unranked Chris Weiler, it seemed like a great chance for Cochran to continue padding his résumé for March.

But seven minutes later, he walked back to the locker room with an uncharacteristic major-decision loss that showed what life in a challenging Big Ten can be like for the redshirt senior.

That feeling has been a familiar one for the Terps. Despite a dominant win by Michael North, they fell 39-4 to No. 10 Wisconsin to continue their struggles in Big Ten play.

It was clear from the beginning Cochran was having an off night. Cochran’s usual stout defense went missing, giving up three takedowns and a near fall. He found himself in a massive deficit.

Every time Cochran tried to get back into the bout, Weiler had an answer waiting and secured the major decision with riding time to cap off an upset.

“The match kind of unraveled,” Clemsen said. [Cochran] didn’t make good adjustments and that happens every once in a while.”

[In the throes of its Big Ten schedule, Maryland wrestling’s struggles at 125 continue]

The only bright spot on the night was North. He wasted no time going on the attack against Aidan Medora, getting a takedown and two near-fall points to go up, 4-0, early.

In the second and third periods, North stayed aggressive, using two takedowns and over three minutes of riding time to get a major decision victory It was his third victory on the season and got the Terps on the board, still trailing, 12-4.

“I’ve been working nonstop in the room trying to get better at my offense,” North said.

Another slow start doomed Maryland’s chances of an upset early as its troubles at 125 continued. No. 8 Eric Barnett pinned Zach Spence to put the Terps in an early 6-0 hole.

No. 25 Kyle Burwick kept the explosive offense of King Sandoval contained with two takedowns to win by decision, 5-0.

“If you’re going to be a home-run hitter you better swing,” Clemsen said. “[Sandoval] didn’t do that tonight. He was too passive and he was wasn’t as physical as I would like to see.”

Maryland had a good opportunity to get early points and try to get back into the dual at 141. Danny Bertoni kept himself in bounds and finished a takedown on Joseph Zargo in front of the Terps’ bench to take an early 2-0 lead.

An escape had Bertoni in control, seemingly on his way to a victory in his return to the lineup.

But Zargo responded with two near-fall points and a quick takedown in the third period to push ahead, 4-3. Bertoni answered with an escape to tie things up.

With time winding down in the third period in a scramble for control, Zargo spun Bertoni around and finished off the takedown to win by decision, 6-4.

That momentum win at 149 for Maryland was brief as the Badgers took back control of the dual. No. 27 Garrett Model showed his class, having no issues with Conner Decker, winning by major decision, 11-0. And at 165 No. 8 Dean Hamiti pinned Gaven Bell.

Dominic Solis had a 2-1 lead over No. 22 Andrew McNally in the third, holding off every attempt by McNally to take the lead. But he found his opening, slamming Solis to the mat and turning him over to get a pin.

No. 32 Jaron Smith started his return back to the lineup in a big way with an explosive takedown over No. 22 Braxton Amos. But Amos put up six unanswered points to win by decision in a missed opportunity for Smith to get an important ranked win.

To cap off the night Zach Schrader’s losing streak reached five bouts, stumbling to a major decision loss, 18-5, to No. 11 Trent Hillger.

The Terps’ usual stout back four met their match and went 0-4 on the night.

And with its dual losing streak now reaching five, Maryland finds itself at a crossroads, searching for answers. But the schedule won’t get any easier with a quick turnaround facing No. 4 Michigan on Sunday as the Terps’ homestand continues.

“We need to compete better plain and simple,” Clemsen said.