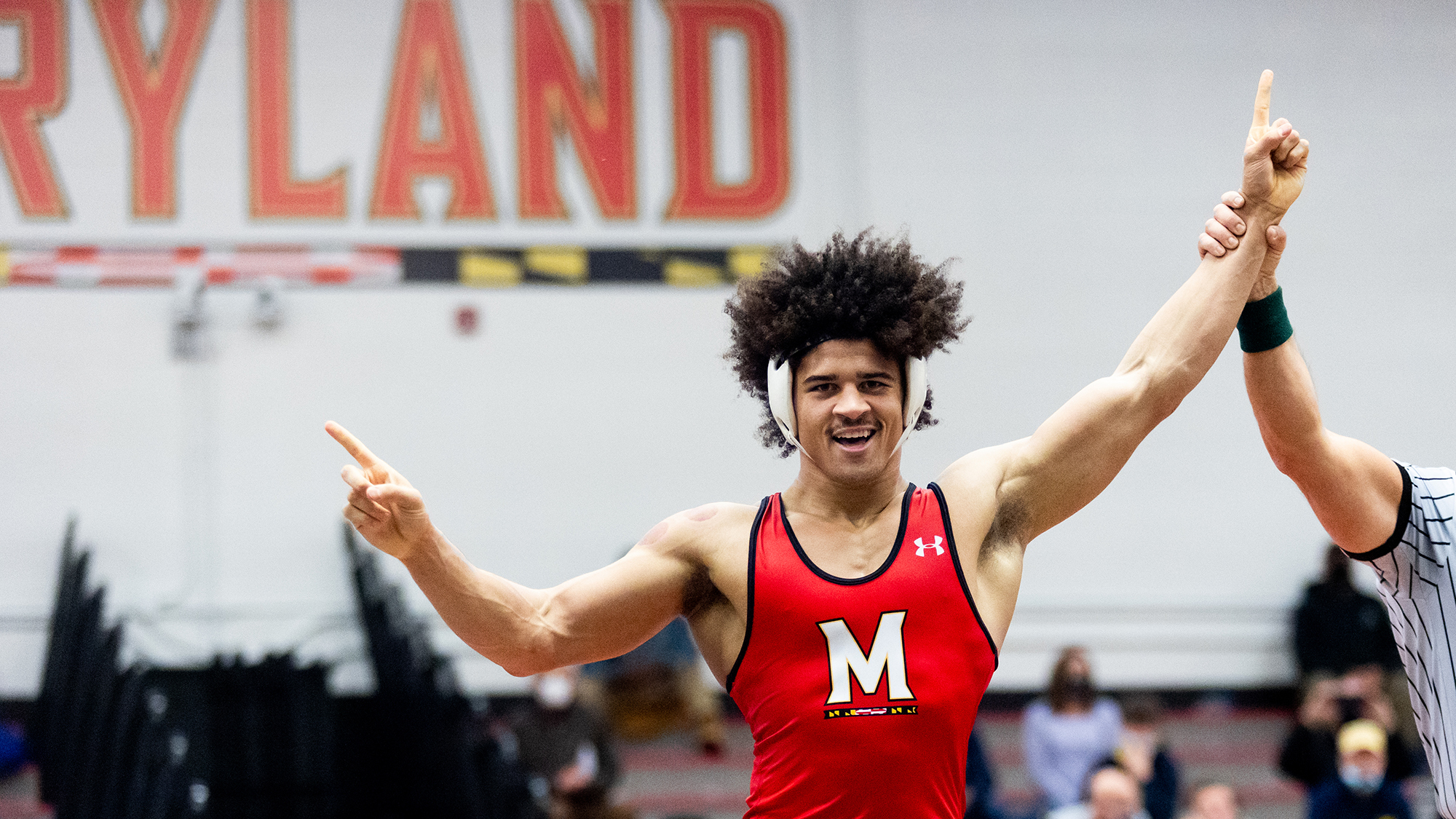 No. 32 Jaron Smith has his hand raised after upsetting No. 6 Patrick Brucki during Maryland wrestling's 40-2 loss to No. 4 Michigan. (Julia Nikhinson/The Diamondback)

No. 32 Jaron Smith was locked with No. 6 Patrick Brucki in sudden victory, fighting Brucki towards out of bounds. The Xfinity Pavilion crowd and the Maryland wrestling bench was on its feet hoping for a takedown.

Smith captured Brucki in a hold and got him on his back to finish off the takedown and a major upset. Smith flexed his muscles towards the Terps’ bench after the biggest win of his season.

But despite Smith’s upset-win, No. 4 Michigan blew out Maryland, 40-2 for their sixth consecutive dual loss.

Just like Friday against Wisconsin, Smith got a quick takedown, but Brucki used a reversal to even things up.

After an escape by Smith, Brucki got a takedown to take a 4-3 lead. Brucki would get another takedown to extend his lead to 7-3, despite Smith having riding time advantage.

All seemed lost for Smith but as the third period wound down, he tied the bout up with a takedown to bring the crowd to its feet to send the contest to sudden victory. From there it was all Smith on the attack looking for the winning points.

Smith got the winning takedown and a win that will come crucial for his postseason chances come March.

“I spent the majority of the last three minutes of that match looking at my corner,” Smith said. “I’ve made several adjustments during that match specifically because of what they told me during the match.”

Outside of Smith, Michael North was the other standout performance. He and Pat Nolan wrestled back and forth looking for the upper hand, but Nolan found the first two takedowns to take control.

North managed one of his own to get back into the bout, 6-5, bringing a quick bolt of energy into the Xfinity Pavillion.

Nolan got another takedown to take an 8-5 lead but North fought back with an escape and slammed Nolan to the ground with under 10 seconds left to tie it up in the third period. But Nolan had enough riding time to win by decision, 9-8, and spoil North’s comeback.

Outside of those two performances Maryland got little to no offense against the Wolverines.

Even with Maryland catching a break with No. 1 Nick Suriano not wrestling, Zach Spence could not mount any offense against Jack Medley and lost by fall to put the Terps in an early 6-0 hole.

No. 8 Dylan Ragusin used four takedowns and two near falls to keep King Sandoval on the mat and win by tech fall.

No. 4 Stevan Micic showed his class with four takedowns of his own, two near falls, and over four minutes of riding time to beat Danny Bertoni by major decision, 16-3.

Through three bouts, Maryland gave up bonus points in all three and didn’t record a single offensive point to go down, 15-0 against the Wolverines.

“[Michigan is] really good,” Clemsen said. “Their [coaching] staff is one of the best staffs in the country.”

Conner Decker was no match for No. 14 Will Lewan at 157, but fought late to avoid a tech fall loss, instead losing by major decision and the Terps went into intermission down 22-0.

[In the throes of its Big Ten schedule, Maryland wrestling’s struggles at 125 continue]

No. 12 Cam Amine used over five minutes of riding time and put on an offensive clinic to beat Gaven Bell by major decision. But Bell fought off Amine late to avoid a tech fall.

To make the afternoon worse, Maryland forfeited at 174 giving up a free six points to the Wolverines as Dominic Solis was unavailable due to suffering an injury against Wisconsin.

No. 11 Kyle Cochran had a tough challenge in facing NCAA All-American and 2020 Olympic Bronze medalist, No. 2 Myles Amine. Amine struck first blood with a takedown but Cochran answered with a quick escape. After that Amine took over with a takedown and controlled the match to beat Cochran, 6-2.

Cochran finished the weekend 0-2 to fall to 18-5 on the season as he continues his push for seeding in March.

“[Cochran] made a mistake..he let go of the foot again, a similar mistake to what he made against [Chris Weiler],” Clemsen said. “We clearly identified an area that Kyle needs to adjust and we’ve got plenty of time to do it.”

It was always going to be a challenge for Maryland to upset a Wolverine team that featured eight ranked wrestlers in their lineup. But Smith’s victory was a bright spot that might be smiled upon come March as the Terps proceed in their Big Ten gauntlet.

“I’d really like to get a Big Ten win,” Clemsen said. “So hopefully we’re healthy and all cylinders are firing.”