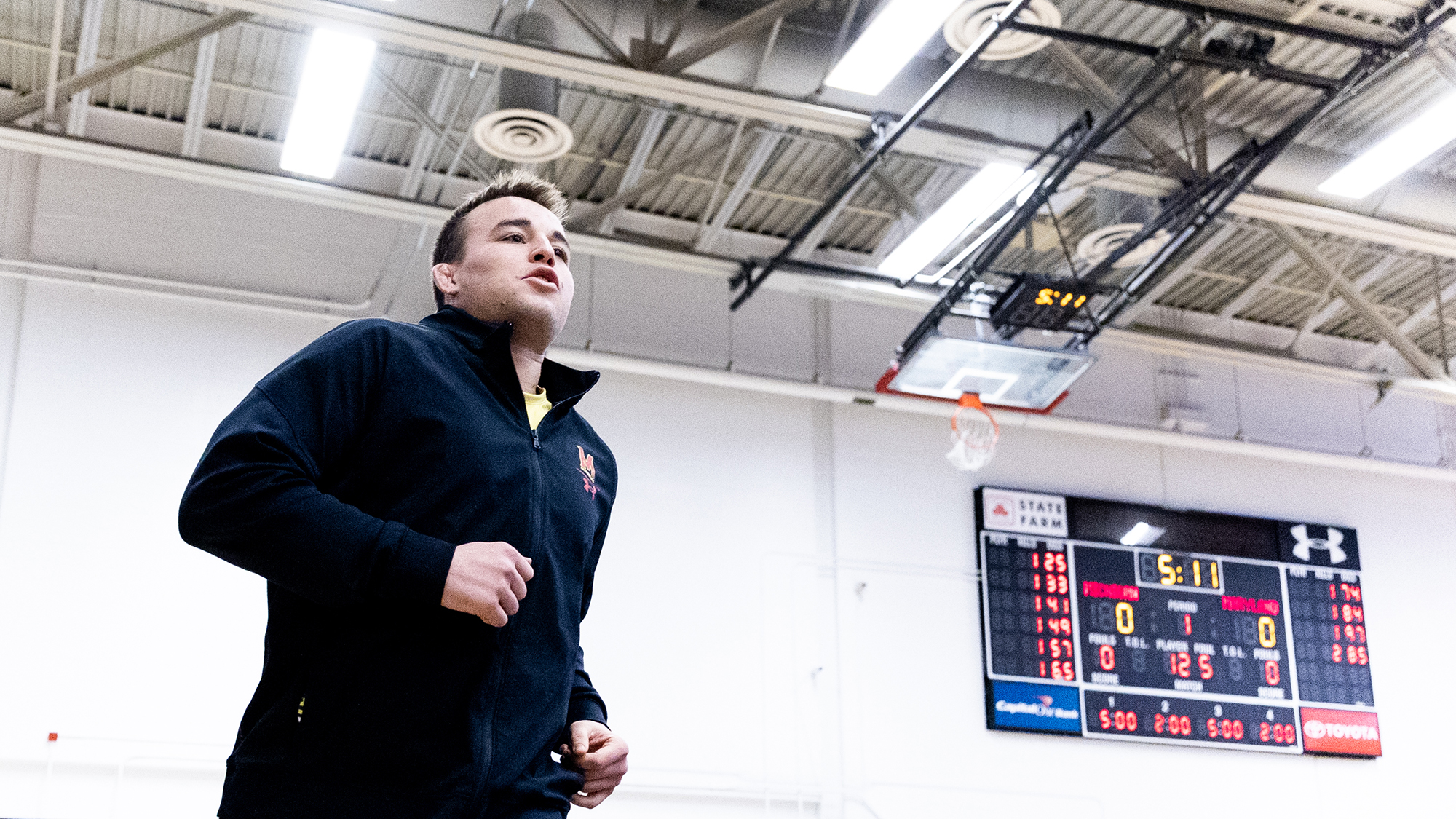 Zach Schrader runs out to the mat before Maryland wrestling's 40-2 loss to No. 4 Michigan on Jan. 30, 2022. Schrader went on to lose by tech fall to No. 2 Mason Parris, his sixth straight loss. (Julia Nikhinson/The Diamondback)

When Zach Schrader beat Chattanooga’s Grayson Walthall by major decision on Jan. 14, he looked to be on the upswing.

Schrader sat at No. 26 in the InterMat rankings and had an overall record of 12-5. His victory over Walthall secured Maryland’s fifth dual win of the season and a sweep of day one of the Virginia Duals.

But on Sunday, when No. 2 Mason Parris finished off a 21-4 tech fall over Schrader, he dropped his sixth-straight match and Maryland’s dual losing streak extended to six.

After transferring from California Baptist University, Schrader had a fast start to his season. He won the 2021 Clarion Open at heavyweight and closed out three-straight comeback victories for the Terps in December.

But Schrader has cooled off. He sits at a record of 12-11 and has recently fallen out of the InterMat rankings after the Indiana and Ohio State duals.

“I just got to keep grinding,” Schrader said. “I definitely should have pulled off a couple of wins … but you just gotta take what I can from the matches and try to get back to what I can do.”

Some of those ranked losses have come against Big Ten competition. Parris, No.9 Trent Hillger and No. 17 Tate Orndorff have presented a challenge for Schrader.

Another adjustment Schrader had to make when he joined the Big Ten was wrestling twice in a weekend — something he wasn’t used to at California Baptist.

And this weekend will not be easier for Schrader — he’ll face more tough competition against projected starters Brad Wilton for Michigan State and No. 10 Lucas Davison for Northwestern.

While beating Big Ten wrestlers is a tall order, Schrader is presented with an opportunity to break out of his slump in dramatic fashion.

“Any win in [the Big Ten] at any time is a good win individually and from a team perspective,” coach Alex Clemsen said. “If you’re a starter in our league you’re pretty damn good.”

A part of getting back on track and picking up wins is opening matches with more energy.

The sixth-year wrestler said he needs to be more aggressive right away against his competition, something he’s been working on in practice.

“I think I do a good job later in matches wrestling,” Schrader said. “What gets me a lot is not coming out necessarily ready to go with my opponent sometimes.”

Despite being in the throes of a losing streak, Schrader isn’t fazed and feels his fortunes will turn in his favor.

In the eyes of Clemsen, Schrader is still the same wrestler that contributed for the Terps early in the season. Clemsen still has full confidence in his veteran heavyweight.

“I think he’s continued to have the confidence and the poise that he had early in the season,” Clemsen said. “The biggest thing is that he just can’t let himself get down and I don’t think that’s happened. He seems like he’s still happy-go-lucky, cool as a cucumber, California kid.”

Schrader’s mindset still rests on performing at his best when it matters most — in conference matches.

In his long career, he has never made the NCAA Tournament. Schrader’s goal is to make the trip to Detroit to represent Maryland and potentially bring All-American honors to College Park.

“That would be the perfect cherry on top on the season to be able to finish it in Detroit,” Schrader said.