No. 17 Maryland women’s basketball knocks off Nebraska on senior day, 80-65 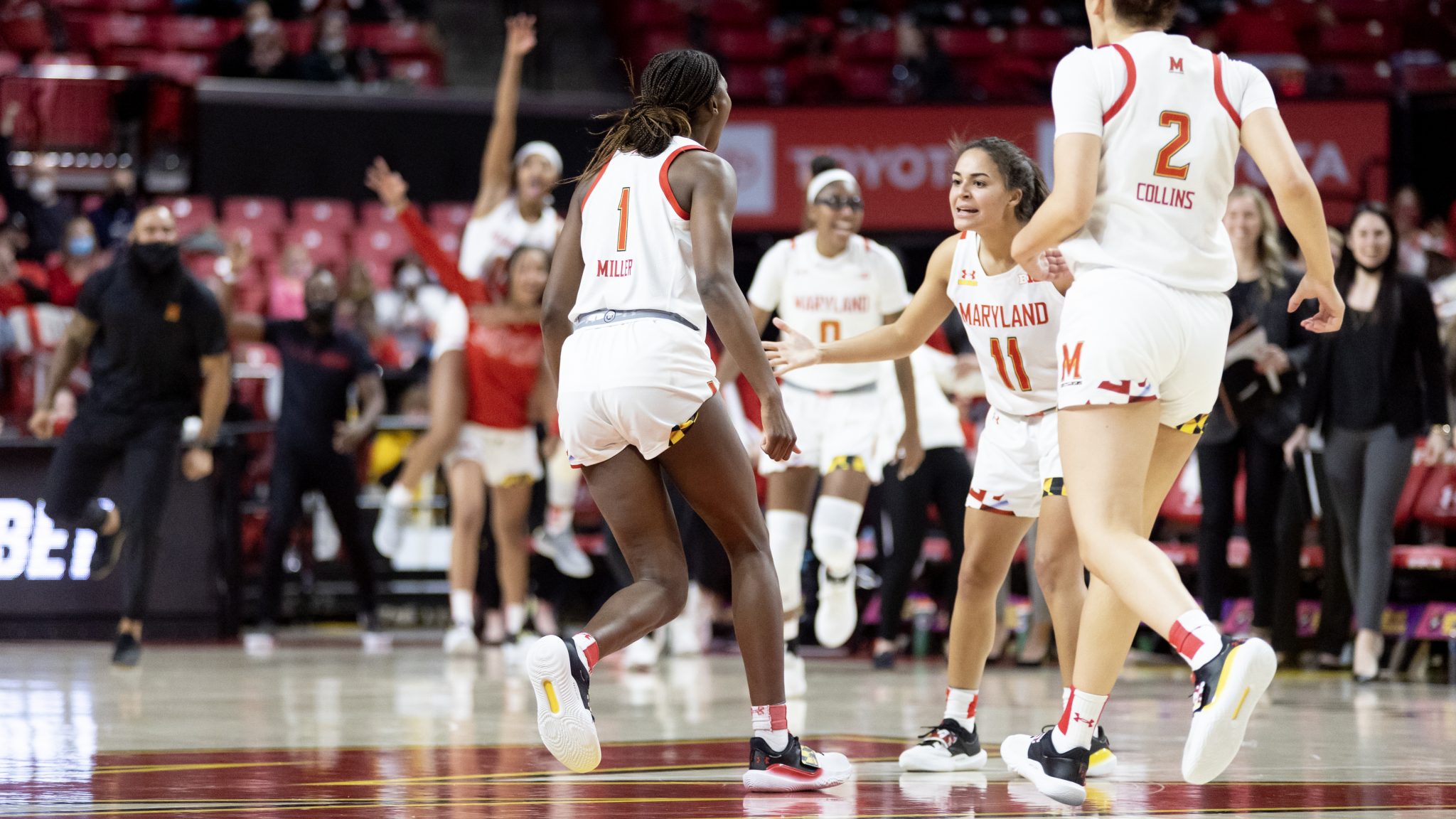 The freshman dished it to a trailing Katie Benzan, who then fed Chloe Bibby in the low post. Sensing the double team, Bibby kicked it back out to Benzan for her signature three from the top of the key.

Bella Cravens tried to recover, but Benzan’s pump fake sent the Husker defender flying the other direction. The sharpshooter then took a side dribble to the right and nailed the wide open three to put the Terps up a comfortable 23 points.

On a day of celebration, Maryland made good on its ambitions to get a victory for its veterans on senior day, cruising to a 80-65 win to continue its winstreak.

“We honored our seniors with one of our best performances to date,” coach Brenda Frese said. “We were ready to play from the tip. I thought we played with a lot of great poise and confidence.”

The top two offensive rebounding teams in the Big Ten squared off, putting their respective four-game win streaks on the line.

Maryland struck first on the offensive glass, with Angel Reese corralling a Bibby miss to put the Terps on the board. But Alexis Markowski delivered a similar blow on the way back for Nebraska.

While the Cornhuskers held the early offensive rebound advantage, it was no match for the energetic Terps. Back-to-back threes from Mimi Collins and Bibby kickstarted a massive 18-4 run. Both the crowd and bench were as loud as ever as Maryland began to run up the score.

A Diamond Miller three — which gave her as many points as Nebraska had as a team at that point — caught the Xfinity Center on fire, forcing coach Amy Williams to call a necessary timeout, down, 22-8.

Annika Stewart drilled a three out of the timeout, but that was all the Huskers would get as they fell behind by 15 at the end of the first quarter.

It didn’t get much better from there as the Terps’ defense suffocated the road team. They got out on the break often in the second, leading to a gigantic plus-19 points off of turnovers.

For a defense that has had its share of peaks and valleys this season, the first half was certainly a high for Maryland. It allowed just six made field goals en route to a 43-20 halftime lead.

“When we have that kind of focus defensively, it gets us going with both ends of the floor,” Frese said. Reese added, “I think everybody in the country knows [defense] is something we need to work on, so we’re doing that and taking it day by day.”

It was more of a scrappy third quarter even as the Terps ran away with the lead. The lineup of Collins, Bibby, Reese, Benzan and Taisiya Kozlova dove for loose balls and attacked the glass with 11 rebounds to Nebraska’s three.

The Cornhuskers managed to outscore Maryland in the third, 21-18, but it was just a footnote in an otherwise dominant performance from start to finish by Frese’s squad.

Bibby led the way with another 20-plus-point outing as she, along with Benzan, played nearly the whole game. The two seniors showed out on their special day, exiting the court with 1:01 remaining to a round of applause.

“There’s still a lot of basketball left, a lot of games left in February,” Bibby said. “We still have our goals and what we want to accomplish this season. Awesome [day], good to celebrate, but we’re onto the next.”

Maryland never trailed in this one, extending its win streak to five games as a home date against Wisconsin awaits on Wednesday.