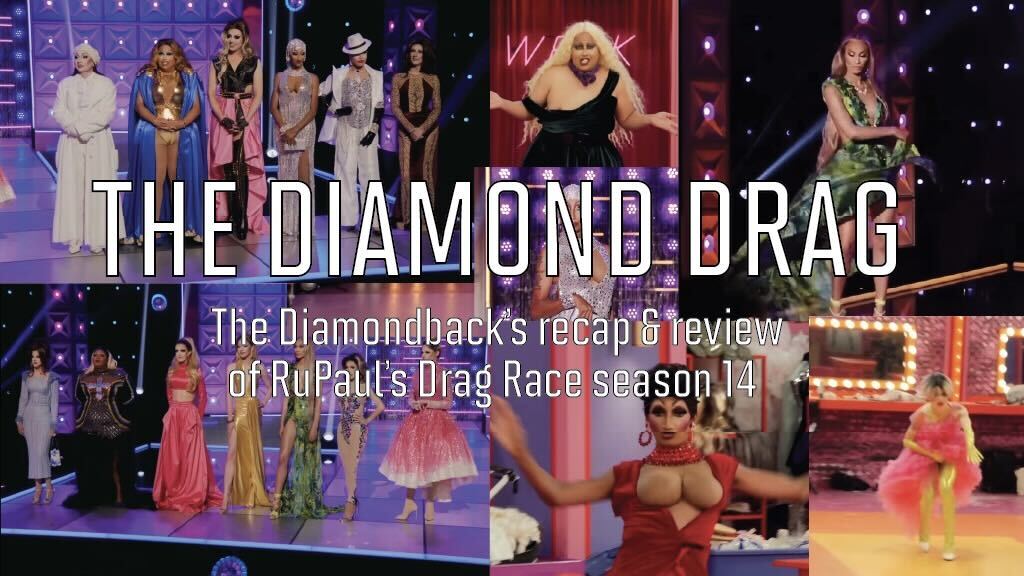 Episode four begins as the queens return to the Werk Room after June’s elimination, and the mood is very somber as the queens realized this was the first real elimination of the season. The mood then becomes awkward — although I personally found it hilarious — as Jasmine Kennedie begins to cry because she didn’t win the challenge.

I like my drag queens like I like my coffee: delusional. Jasmine crying because she was safe when someone just went home and lost their opportunity for the crown is peak delusion, and I love it.

The next day the queens walk in, and Jasmine is still upset she was safe. The queens, mostly Kornbread, take this time to try and explain to Jasmine that she talks too much.

Their conversation is cut off by RuPaul entering the Werk Room. He announces the maxi challenge is to film drag race super teaser moments. The queens must create fake dramatic moments to use in the “coming up” or episode trailers. Willow Pill and Maddy Morphosis are designated team captains for winning the challenge and lip sync, respectively.

The biggest drama moment was when Jasmine was the last remaining and got to choose her team. She put herself on Willow’s team, which also had Kornbread, shocking the queens because of the brief tiff just a few moments before.

When the groups split up, Jasmine makes sure to wave her white flag and lets her group know she wants to listen. In the process of talking about wanting to listen more, she ends up talking over more people. Kornbread proceeds to call her out once more, and it was clear Jasmine was not internalizing what the queens were saying.

The queens proceed to film their teasers with Michelle Visage and Carson Kressley. Across both groups, neither seem to be doing particularly better than each other. Both had some strong moments, and both had a few queens struggling.

The next day, the queens got ready for the ‘Night of 1000 J.Los’ runway. While the queens are doing their makeup, Alyssa Hunter opens up about coming out to her dad. She recalls her dad finding some adult gay content on the computer and confronting her about it.

In the process of coming out to her dad, he comes out to her as gay too; it was a really sweet moment to hear about.

The queens also got a surprise: a sponsored video message from Jennifer Lopez herself. I thought it was cute, but hated how it was just an ad for her new film, with “Marry Me, In Theaters” flashing on the screen.

RuPaul took the stage, and I just want to make note that this was one of my all time favorite looks of hers. She looked stunning in her bronze to turquoise fringe gown.

Overall, the runway was just fine. It’s hard to judge a runway like this where the goal is to recreate an iconic look.

I do need to take a moment to talk about Kerri Colby’s outfit though. It’s fair to assume that when you think of iconic J.Lo looks you think of the dress — the iconic green Versace dress that literally led to the creation of Google Images.

When Kerri Colby turned the corner in the actual Versace green dress from the spring ‘20 collection done to commemorate the original dress, my jaw dropped.

I have not stopped thinking about it since. It literally just blows my mind. She looked unfairly gorgeous. She was so stunning you just had to hate her because you’ll never look like that.

We see the super teasers and I think Team Willow was strong across the board, but Team Maddy had a few very strong individuals. Willow Pill, Angeria Paris VanMicheals and DeJa Skye are announced the tops and Kornbread “The Snack” Jeté, Kerri Colby and Alyssa Hunter are the bottoms.

I personally disagreed with the bottom because I thought Kerri was a lot stronger than other queens, such as Jorgeous. Angeria is announced the winner of the challenge and is the first queen to win two challenges in season 14. I thought DeJa was stronger in the challenge, but her runway fell flat.

The bottom two is announced to be Kerri Colby and Alyssa Hunter, and they lip sync to “Play,” by Jennifer Lopez.

This lip sync was controversial and I quite frankly still don’t know how to feel. If Kerri didn’t have to worry about ruining a piece of iconic fashion history probably worth just as much as the $100k grand prize of Drag Race, I know she would’ve gone a lot harder.

[The Diamond Drag: Big Opening No. 2 of ‘RuPaul’s Drag Race’]

That being said, Kerri still was pretty strong — it was just a different performance style than Alyssa, and quite frankly J.Lo herself.

Lopez is a dancer, so you would expect a J.Lo lip sync to be high-energy fun, which Alyssa delivered. I think when her money gun prop messed up, she felt like she had to do a million tricks to make up for it, and it didn’t read the same.

Kerri wins the lip sync, and Alyssa goes to reveal her chocolate bar of saving, which I, and most likely all of you, totally forgot about the chocolate twist until that moment. Unfortunately, Alyssa did not have the golden chocolate bar.

I was sad to see Alyssa go because she had a really polished look and fell victim to what I can only assume was production meddling for story sake. I still think Alyssa won that lip sync, but I’m very happy to see Kerri stay.