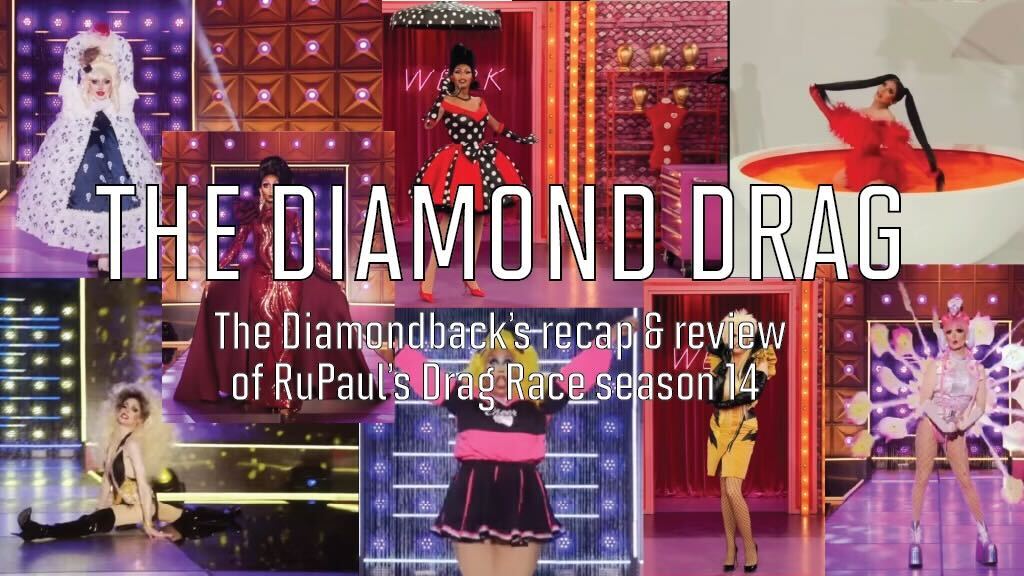 Episode two began with the first group of queens coming back to the Werk Room after Orion Story’s elimination. The queens read Orion’s mirror message and sat around and cracked some jokes, but the big moment was when Alyssa then asked the other queens what they thought the next seven queens would be like.

Shady quips were thrown all around, and I chuckled a bit when Willow said she hoped they’re ugly. The show gave us a few little dramatic clips, did the theme song and then we were back into the Werk Room to meet the next seven queens.

I felt like only Maddy, Angeria, Lady Camden and Daya gave us a taste of who they are. Jorgeous, DeJa and Jasmine just wore pretty outfits. I got more from the confessional introductions from those queens than anything from their aesthetic choices.

Just like last week, RuPaul walked into the Werk Room, welcomed the queens and officially declared this the second part of the split premiere. The queens again found out someone will be going home this week.

The queens were then whisked away into the first photoshoot and I thought this week’s was far better than last week’s, but it was also less dangerous. First up was DeJa Skye, and she was asked to pose with a bowl of Tic Tacs in honor of Ru’s annual Tic Tac lunch with the final three or four each season. After a few pictures, Ru revealed a giant bowl of Tic Tacs the queens had to pose in.

I thought everyone did pretty well, but my personal favorite was Lady Camden. Angeria ended up winning the mini challenge.

After some more de-dragging, RuPaul came back for some Werk Room chats. The only two major moments were Ru talking to Lady Camden about how he thought her ballet talent is boring and talking to Maddy about how she’s the first ever heterosexual cisgender drag queen in Drag Race herstory.

Opening the can of worms that is a straight man on Drag Race felt somewhat redundant at this point. I think as long as Maddy is respectful of drag and its history and significance to the queer community, then let her compete.

The next day, the queens walked in and makeup chats commenced. The queens talked to Maddy about being straight, and they all commended her for being comfortable enough in her heterosexuality to do drag. The queens also got a surprise from this week’s guest judge Alicia Keys.

We then headed to the runway for the talent show. First, we had Jorgeous do a dance number, and I thought it was really good. It was a little low energy in the beginning but once it picked up, she really killed it.

We then had Jasmine Kennedie also dance and wow. It’s people like Jasmine who make me realize I need to stretch a lot more because she was just throwing herself into splits, dips and flips like it was no problem.

Having to follow the dance skills of Jorgeous and Jasmine is nothing short of intimidating and unfortunately, Daya Betty fell into that position. After seeing the prior acts, Daya’s lip-sync number was just okay.

[Why you should compartmentalize your social media presence]

Next was Lady Camden who made Ru eat his words about ballet being boring. Instead of dancing to a traditional ballet song, she pranced around to some disco. What made it even more impressive was she did it in stilettos.

Then came DeJa Skye doing a comedy cheer routine, and I was bored. DeJa had said she is a professional cheer and dance choreographer outside of drag, so I expected more. The jokes didn’t land, and I was all around left wanting more.

After that came Maddy Morphosis playing guitar, and she also bored me. Ru emphasized in the Werk Room that for this challenge, you have to take something mundane and drag it up. You saw Lady Camden do that with ballet, but didn’t see Maddy do that with her guitar. It was nice to see an actual live instrument this time, but she strummed a few chords and then was done.

Closing the show was Angeria with an original track, and it was the high energy showstopper I needed. It was just so much fun and such a joy after a series of meh acts.

We hit the runway and the category was sickening signature drag, so essentially the same as last week’s signature showstopping drag.

RuPaul announced Angeria the winner of the main challenge and DeJa Skye and Daya Betty the bottom two of the week. The queens lip-synced for their lives to Alicia Keys’ “Fallin,” and wow was it good. I couldn’t call it for most of the time, but I was leaning toward DeJa more than Daya. I would also just like to address that Daya started bleeding mid-performance, and I can’t believe not a single person acknowledged that on the show.

DeJa Skye was announced the winner of the lip-sync, and Daya Betty was asked to sashay away. I was sad to see Daya go as I really liked her punk aesthetic and wanted to see more.

Next week, the queens will finally unite, and I’m excited to see the chemistry between the group as a whole.